All the gear, but no idea!

It was touch and go as to whether I ventured out this weekend, but a midweek call from Brian, convinced me it was a good idea. The forecast was spot on - cold overnight and cold all day, but with some pleasant sunshine.

A local session on the canal was in order. Having read about a local match being won a couple of weeks earlier with 38lb (taken from a heavily iced up stretch), along with excellent back up weights, I was cautiously optmistic. Big mistake!

Brian, fresh from an excursion to the PDC darts in Purfleet the night before, was keen to get amongst the Pike and Zander. On arrival the canal was iced up by the car park area, but was OK down by the marina entrance. We strolled down to check it out and were a little put off by a cold facing wind. However, a passer by mentioned a 12lb Pike coming out of there recently and that sealed the deal. The wind suddenly seemed to go away with the promise of such fish! 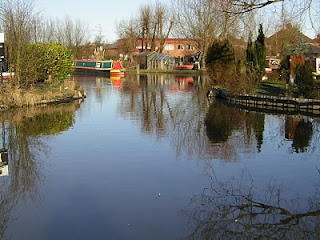 Tactics were much the same as those employed in the hugely successful Ryton double blank the previous week. A Pike rod each and a float rod each for a maggot approach. 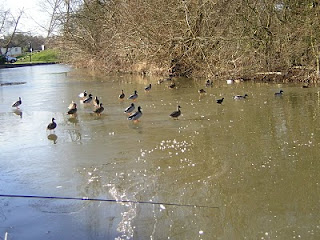 That's all there was to report in terms of the fishing. Apart from a few badly placed casts and snagging the odd bit of ice, nothing really happened. Skating ducks and the occassional loony passer by, helped to while away the time. A couple of religious sorts made an attempt to convert Brian, but like us, they failed miserably to catch their intended quarry!

For me this is all getting a bit serious now. Since chucking in my PDC darts membership last year, I spent the money I saved on fishing gear. Christmas and my birthday also swelled the coffers. A new rod bag, rods, reels and seat box have emerged, yet I can't seem to catch a single fish. Actually I can't even buy a bite this decade!

We'll see what next week brings and I'm hoping the ever reliable Avon will be back to a sensible state so I can plunder that instead. If Carlsberg did blanking, they'd definitely be in touch with us for advice!
Posted by Sean at 08:06 1 comment:

A decent looking day and with the river likely to be pushing through a bit, we opted for a pool. Fresh with optimism from Brian's newly acquired Piking prowess last year, we purchased some deadbaits from Lanes on the way, along with some maggots to hedge our bets.

We decided to take the hike around to the sandbank pegs as it's generally more peaceful round there and there's plenty of water to go at. We opted for similar set ups - one float rod for a maggot approach (or for anything else Brian cares to put on a hook!) and one rod for legering deadbaits. 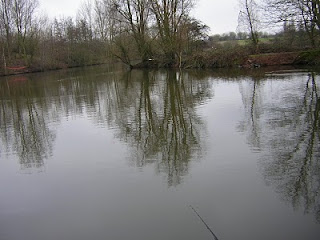 To cut the story short, it was a case of double blank. Not a sniff on either of our set ups all day. Well that's not totally true - Brian did have a bit of an enquiry from a Coot late on. His trusty bite indicator rag rose to attention, but to his dismay it was just a cheeky Coot which he didn't connect with.

Across the way on the road side bank it was a different story. We sensed something was transpiring when an angler scurried up the bank to get help. It turned out that he'd landed a pike that he wanted to weigh and photograph. At 17lb 8oz it was a mightily impressive looking fish - even though we were a good 50 yards away. 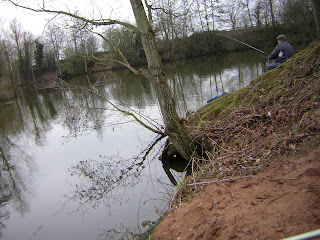 So, a no score draw to start the year, but nonetheless nice to wet a line after a frustratingly long lay off. It can only get better, can't it?