I finally caved in and went for my first proper predator session of the season. I have dabbled in recent times on occasions, but this was my first dual rod effort with my main gear.

With the wind still blowing through a little, I headed for a reasonably sheltered part of the Avon. The clocks went back overnight and I opted to ignore the extra hour in bed. I was bankside at 6-30am.

Tactics were float fished deadbaits, alternating between smelt, sardine and roach, across a handful of swims. I had the place to myself, so I could hop pegs at will - just how I like it. 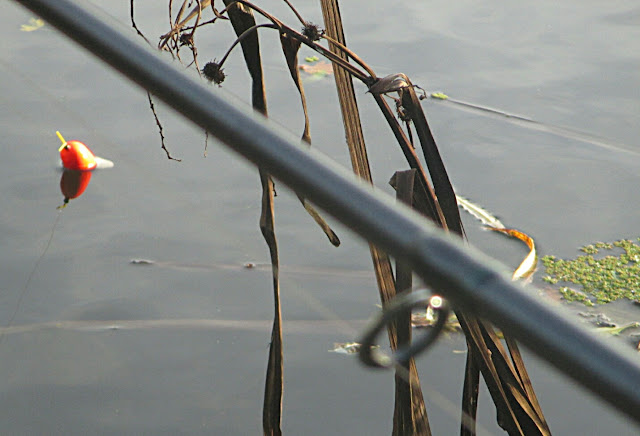 When it comes to pike, smelt is definitely my first choice deadbait bar none. The distinctive cucumber smell conjures up an air of a confidence that other baits can't quite match. It's a definite get out of jail card on rock hard days.

Lamprey, with its blood oozing quality, is a close second. It's quite expensive though and often shorter in supply these days. More of a luxury bait for me now, but I'll break into my meagre supplies when I'm on some of my longer sessions later in the year.

Roach is next in the pecking order and my main attack for zander. I've just stocked up on these and will be looking to perfect my approach in the coming months. I'm still quite new to this zander lark and have plenty to learn. 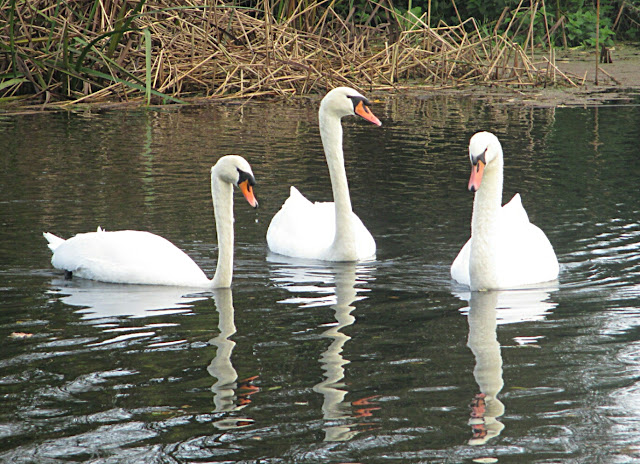 Sardine is another alternative I use regularly. A soft oily bait, it offers up a good sized mouthful at a very low cost (when bought from the fishmonger). Again, I've just stocked up on a few of these.

Sprats are very bleak like and always worth a go. Very cost effective too and these small baits can often throw up a surprise.

Back to the session and with clear water I expected a tough session. The river didn't disappoint! A blank in swim one and just a single small jack from the next three to a smelt offering. Tough going.

A return to the banker swim and a twitch induced take saw me battling something beyond jack size. A powerful initial run saw me having to apply the brakes to keep it from a big snag.

Almost daring to tail walk, it luckily turned and then kited back towards me. Then it all went a bit stupid as it ploughed straight beneath the staging in front of me. Seemingly disorientated, it turned around and was cornered by my now waiting net. What looked set to be a sporting battle, became all a bit anticlimactic. Not that I cared though!

It was a lovely clean unmarked fish and I thought maybe a scraper double. It was close, but the Avons confirmed it was a couple of light snacks short at 9lb 11oz. Funny how the lack of any size reference (other than the mat itself) makes the fish look small. 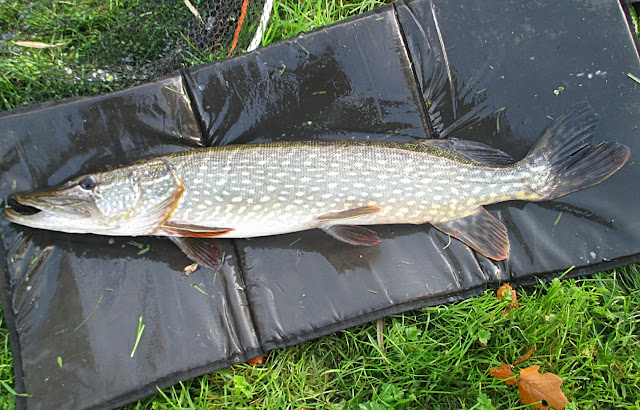 A few token challenge points to add to my tally. I'd like something double the size, but patience is required. It's just a case of wading through the singles and waiting my turn. Time is on my side for now.

Rain is still desperately needed, but I can't see anything significant in the forecast. Not sure where I'll head next. This clear water is proving challenging.
Posted by Sean at 15:21 1 comment:

In keeping with recent fortunes, October hasn't managed to revive my flagging Blogger's Challenge campaign. Not a single point added for several weeks now. The floodgates will surely open soon. I can but dream...

With rivers running as clear as gin for most of the season, it seems to have been tougher than ever this year. Low light conditions often help to offset this, but it's rare for me to be able to make best use of dusk and dawn prior to the clocks changing. That all changes soon though and I'm looking forward to better prospects.

A few sessions to catch up on, beginning with the obligatory Anker blanker. Little to expand on really other than two tentative bites on the float. Both so quick that they didn't even result in a strike. Another grueller, but thankfully only a short one which spared me somewhat.

Next up was the customary Autumn away trip with Brian and Charlie. With the Wye being rested again, we returned to the Trent with plenty of hope. 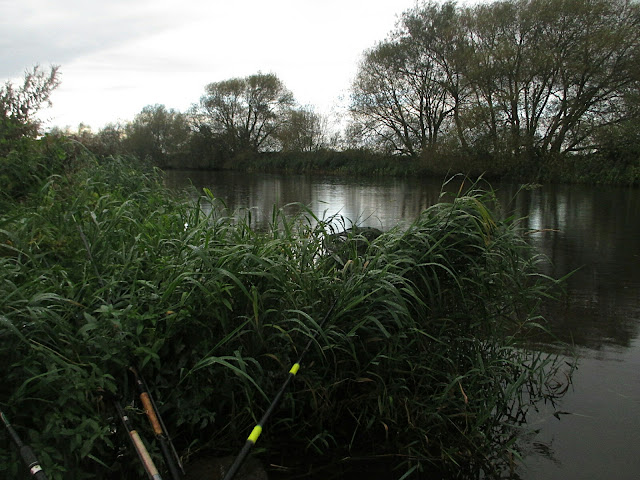 Returns were incredibly poor though. Scratching around on light gear seemed to be the only way to get any action. Charlie was the most patient with that approach, but for scant reward really. I caught only a few ounces of fish across both days. A small jack for Brian was the biggest fish.

Difficult, windy and at times wet conditions, didn't help on day one. A gin clear river wasn't good either. Cormorants around in good numbers too. Night fishing would probably be the way to go in all honesty, although that's not allowed on the section we fished.

I sat it out for long periods hoping for a big barbel. but nothing doing. A nice enough location, but a rethink on venues and more homework is needed before a return to the Trent is attempted. 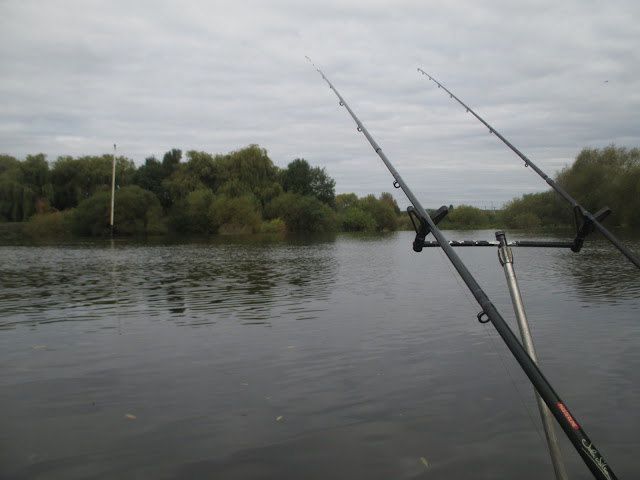 Back home and an invitation to do some more Anker blanking (with Martin) was accepted. The only difference was that I actually avoided the dreaded B word. A single jack saved me from another wipeout. Nothing doing on the bream rod though. Martin had a couple of jacks.

Next up was another away trip away to a venue that I've fancied for a while - the Kennet in rural Berkshire. The purpose quite simply to break my grayling duck.

I'd never caught one before you see. The Warwickshire rivers I frequent aren't exactly abound with grayling. Seeking rocking horse dung would be a more fruitful pastime I suspect. Going beyond the usual borders is the best option.

Charlie accompanied me and we set off in eager anticipation of bagging a few silver ladies. The first area produced nothing, but a swift move by Charlie saw a bend in his rod. A grayling no less. The first I'd ever seen in the flesh.


Great news and despite Charlie's generous offer to gate-crash his swim, I declined. I suggested we keep it in the bank for later and that he should milk it for now. So he did! Another grayling followed, before a succession of hard battling brownies bullied their way in. Frantic stuff at times.

Meanwhile I was royally screwing up in pretty much every swim I tried. Failure after failure was just made all the more laughable as Charlie followed my steps. I passed over a long glide in favour of an enticing carrier weirpool. Nothing for me, but behind me goldenballs was returning another grayling! He was clearly reading it and presenting the bait far better than me.

Lunch was called and it gave me a much needed time-out to regroup. Quite nice to be able to sit down in the shadow of the fisherman's hut, taking in the surroundings. All very civilised. 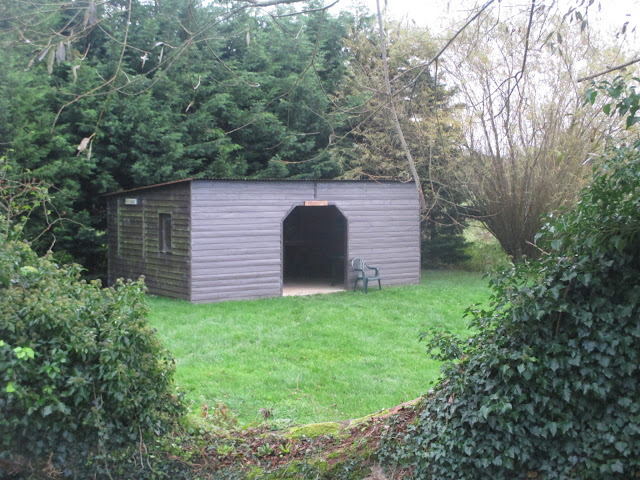 Post lunch, plan B was put straight into action. I'd take a punt on the banker grayling peg. Instant result - but from a brownie. And a few more would follow... 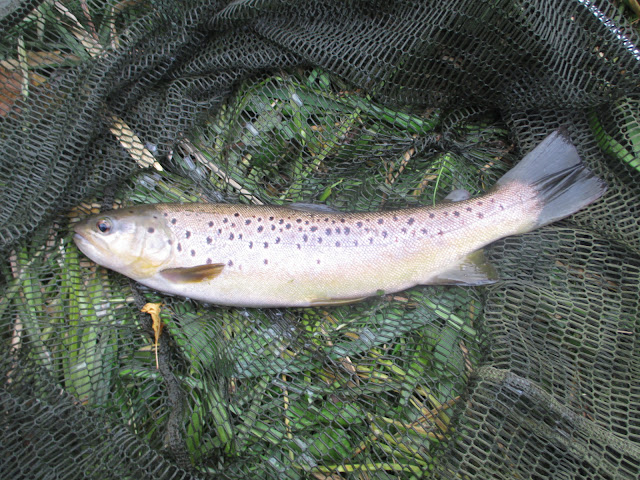 All in the 1lb-2lb range. Great fun on trotting gear, but their thrashing around wasn't helpful with the quest to find me a grayling. Several swims were fished, but try as I did, I failed to catch what I went for. Dace, chub and roach were among other species caught. Charlie had good numbers of trout (16 I think to my 7!), along with half a dozen grayling. An enjoyable experience, even if I was soundly beaten.

To really rub my nose in the brown stuff though, I was reading an online copy of the Angler's Mail at work this week. What did I see before me? Duncan Charman sat on one of the exact same pegs I had fished, catching a grayling nudging towards 2lb. Jammy bastard! A real Jim Bowen Bullseye moment - look at what you could have won!

Very interesting to read the article though and it seems like we didn't fish many of the hotspots. A lack of time limited us to searching  one half of the fishery only. A return visit to explore the remainder is definitely on the cards.

Back locally I had a few hours to spare on Sunday. I wanted to try the Stour for a change, but with the wind howling, I opted for a peg with shelter down the Avon closer to home. A zander deadbait rod was deployed, alongside a legered meat offering. 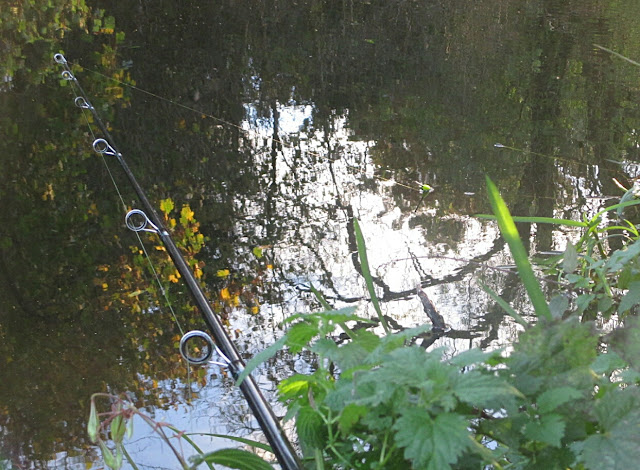 Zilch to the deadbaits, but a single mental take on the meat saved the blank. A spirited fight kicked off and I thought the fish would snag me, but luckily it played ball. I was hoping for carp, but it proved to be the expected barbel - 8lb 3oz. 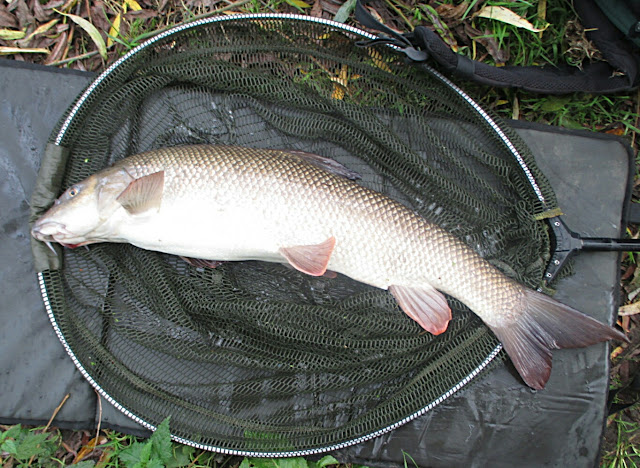 With the weather refusing to cool down properly and with no major downpours to colour the rivers either, it's still a little frustrating. The clocks going back this weekend and the ever shortening days will hopefully help my prospects soon though.

Homemade day/night predator float update - it passed the first two daylight trials. Sadly too much time spent above the surface though! Dusk / evening trials await next....

It's nothing to get overly excited about, but I just prefer using homemade floats. For several years now I've rarely used anything shop bought. I'd never made any predator floats before though, so this is hopefully a welcome expansion to my collection.
Posted by Sean at 14:25 1 comment: