More river action this week and for the first time in a long while I was greeted with perfect conditions for my intended quarry. Bream have eluded me this year on the river but this time everything seemed stacked in my favour with the river carrying a few inches of extra water, nicely coloured and temperatures on the mild side.

The club stretch I was fishing benefits from being very sheltered when the mild south westerly winds are howling through. Across the river in the distance I could see trees being bashed around, while I sat in a little oasis of tranquility. 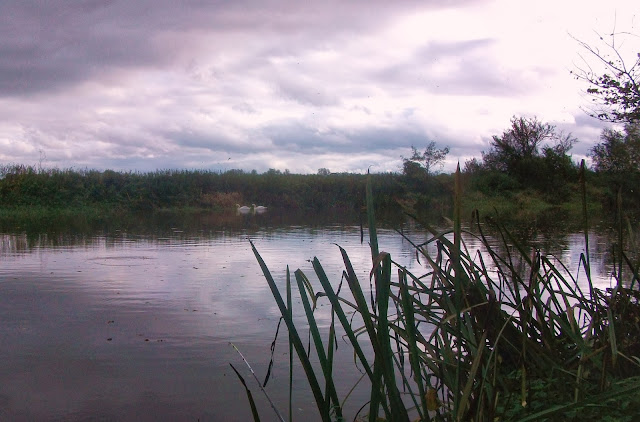 I had a good few hours in hand so I gave it the full baiting treatment. Several balls of groundbait laced with casters and some mollasses were plopped into a 10ft deep swim that has thrown up decent bream in the past. I was confident they would show, but it proved to be totally misplaced as I drew a total blank with them yet again.

The coloured water is good for most species and the roach that are often very hard to find to were very obliging. I caught a good number of nice quality fish with the best one falling to a lobworm and just failing to reach the pound barrier at 15oz. 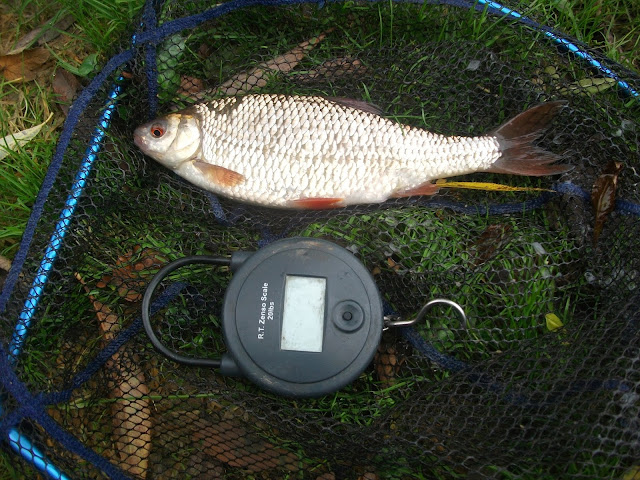 Dace were one a chuck to maggot, but the lobworm sorted out the better fish. The best fish to worm was a perch that went 1lb 9oz, but I managed to make a balls up of the photo. I was trying to be clever with a different angle close to the water and the fish made good its escape.

Despite plenty of fish being caught, I didn't get anything chomped by a pike. I did have one watching me very closely though and it stayed in place for a good part of the session just beneath the landing stage. 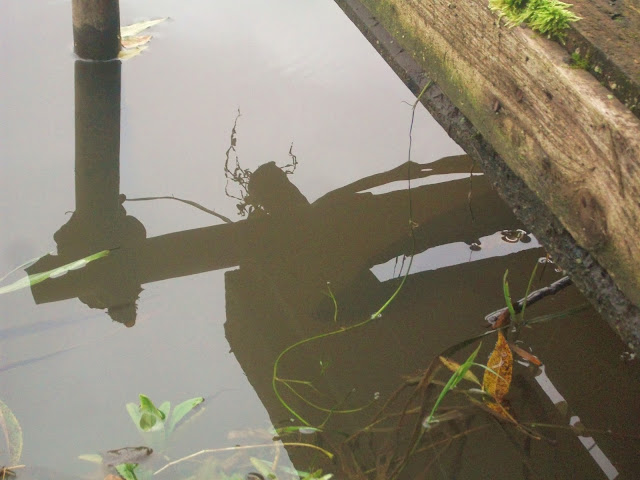 One downside to the day was when I was packing up and I heard a splash behind me. I assumed it was a pike, but I was faced with a cormorant. Then another one appeared out of the water. They saw me and flew off upstream. I've never seen any before on this stretch and I'd like to think I won't again. It's currently stuffed with fish though, so I think it's wishful thinking.

With a storm brewing and talk of possible flooding we'll have to see what damage it does to next week's prospects. Hopefully things will settle down by next weekend and I can have another crack at putting my bream hoodoo to bed.
Posted by Sean at 11:21 1 comment:

I was itching to get on the river this week when I saw the weather forecast. The problem was what to fish for!  As it turned out I had some other commitments from midday, so it was going to be a short and sweet morning session. That ruled out a crack at the bream, as I 'd prefer a longer session when targetting them. I settled on perch and pike.

I'd already got pike rods ready to go, so I picked out one of those. The other rig would be a light bomb on a short 8ft quiver tip set up. The short rod was perfect for fishing just beyond the platform I  intended to fish and where I know the perch (and pike) often hang out.

I was on the bank for 7am, struggling to see what I was doing through the gloom, but basking in the double figure temperature. Was it really mid October?! I popped out a deadbait a little upstream and initially ignored my plans and spent 45 minutes catching dace, roach and chub on the bomb rig slightly downstream. All the time I was also feeding the swim directly in front of the platform, but biding my time. Initially the maggot approach had been slow, but after 10 minutes the fish switched on and it was one a chuck - nothing of any size though.

I then plopped the maggots down in the platform swim and got an instant take. Then a whooosshh, as a pike propelled itself from beneath my platform and towards my fish. Luckily for the dace I reacted quickly and it was lifted to hand. Clearly the predators were present, so I moved the deadbait across and switched to a lobworm slightly downstream. 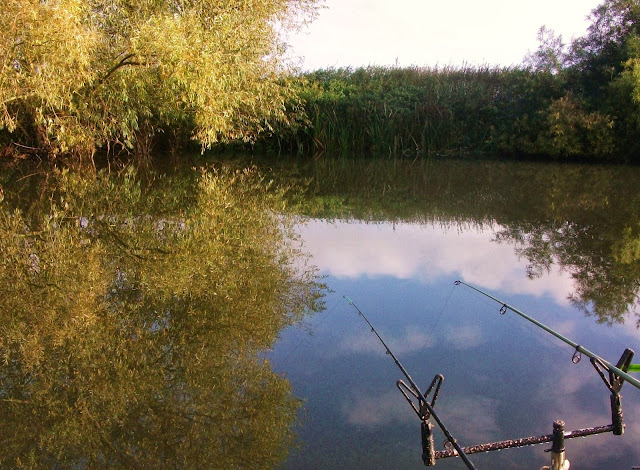 The worm didn't really yield a lot on this occasion though - the best being a perch perhaps a shade over a pound. The static deadbait rod wasn't working, so I ditched the float and tried wobbling the bait around the swim - again no takers. I then went for legering and it did the trick. I had a take that resulted in a lost fish, but half an hour later I managed to stay connected to my first pike of the season, which fell to a smelt enhanced with some red coloured liquid worm flavouring. I have no idea if the enhancer helps, but I think it makes the bait stand out nicely. It wasn't a huge fish by any means, but at 7lb 6oz it gets the pike season moving for me. 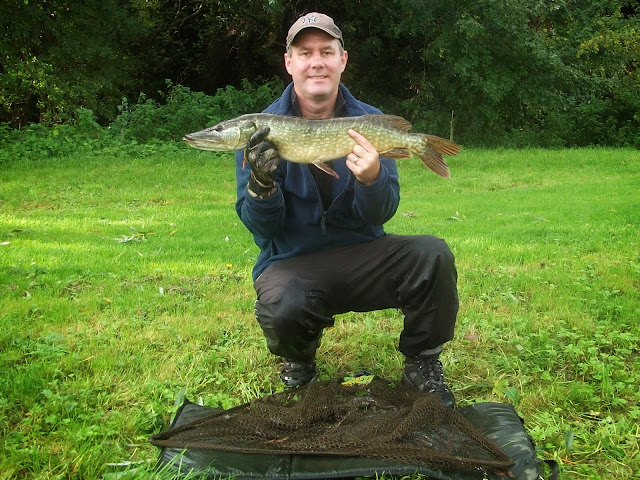 If the weather and river both stay half decent and I get the chance of some longer sessions, I'll probably put the pike on hold for a while. I really want to give the bream and perch some serious attention for hopefully another month, to see if I can crack a couple of personal bests.
Posted by Sean at 12:51 1 comment:

Summer is now consigned to history I don't think it will be lingering long in my memory from a fishing perspective. The same applies to the Spring before it!

I haven't done a huge amount of fishing since my last post, but I did sneak a few short sessions in while I was on a family break in Somerset. I took in most of the usual haunts on the Rivers Axe, Huntspill and Tone on 3 different club day tickets.

The Axe (at Bleadon) was miserly, but the Tone (at Ham) and the Huntspill (at Gold Corner) were full of fish. The landing net stayed pretty dry though, with just plenty of small silver fish on offer. I was accompanied by a new fishing partner, Luke (daft name for a dog if you ask me, but he's not my dog so what do I care!). 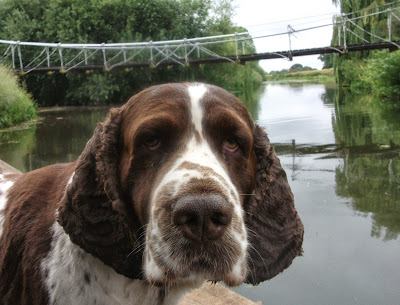 He was totally fascinated by the whole fishing experience and seemed to be happy just staring at the water, with the occasional excitable look when a fish was swung to hand. Unlike many dogs, this one seems to dislike water, which is a bit of a bonus when you want to do some fishing. His predecessor spent more time in the river than out of it!

I had a couple of Pike sessions on the Avon in early September - I'd got fed up of the poor fishing and decided on an earlier than normal dabble. It was pretty hopeless though and two sessions threw up just one bite, which resulted in a small jack slipping the hook.

I then got away from the fishing for a couple of weekends courtesy of a Western Mediterranean break. Just before I left, a friend had informed me that the river was now fishing well and he had his eyes on big perch. He was claiming to have seen one of 4lb+ at the end of his keepnet. Optimistic thoughts perhaps, but he's had them to 3lb 5oz from the same stretch and there's certainly enough prey fish in the river for the perch to grow fat on.

Today saw my first session back on the river for 3 weeks and I was itching to have a bash at the perch, with the aim of breaking through the 3lb barrier some time this Autumn. The day before I'd dug up part of the garden to accommodate some broccoli that I'm going to over-winter. It was a good excuse to collect a few lobworms, instead of raiding the compost bin.

The weather was beautifully mild (19C when I called it a day), but the river was still as low and clear as ever. There was a big difference though. Fish that has previously kept their heads down during much of the daylight hours, were now topping everywhere. It was a fish fish a chuck on maggot tactics, with mostly dace showing, but with the odd roach and chub thrown in. 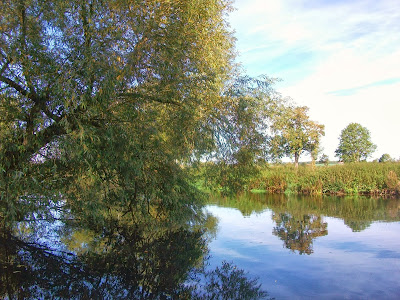 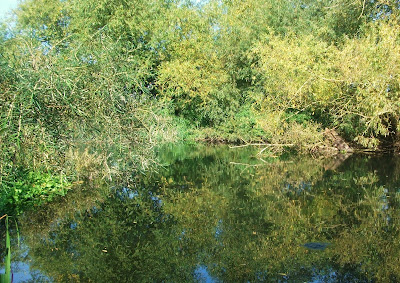 Peering just beyond the platform I started to see some darker profiles moving through the clear water. First a small pike of maybe 5-6lbs, followed by a decent perch. The pair of them kept sweeping through the swim (at the end of my rod), almost as if they were intent on teasing me. I tried a soft small rubber lure to start with, but that didn't succeed so I switched to a lobworm. After much trying I eventually got a take, but that resulted in half a worm coming back and no fish. I quickly dropped it back in and got an instant take - but only from an 8oz perch. I'd wasted too much time by now.

I didn't have a big supply of worms, so introducing chopped worm wasn't an option. In a bid to liven things up I put in a few balls of groundbait at the end of my rod. The idea was to draw in the small fish to a tight area and hope that the perch would be watching and waiting. I rested the swim for a while and went back to trotting for roach and dace on maggot, bread and corn for a while.

When I could see that the groundbait had drawn in the small fish, I switched to a legered lobworm on a light rig (my Shakey Wand was out of retirement!). First drop in over the bait and the tip pulled down hard and stayed put. I struck and could see that I'd got a nice perch on. I took it gently and it popped into the net. It was my best river perch at 2lb 8oz. 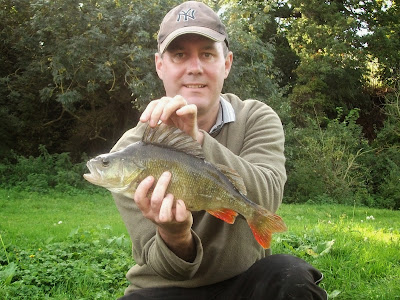 I persevered with the remainder of my worm supply, but didn't manage anything else of size. Just a few more perch up to 8oz and several greedy dace.

Hopefully I'll now settle into a more regular fishing (and blogging) routine for the rest of the season and things will improve from here onwards.
Posted by Sean at 13:57 2 comments: