I wasn't sure about going out this weekend, but the reality of my impending redundancy is sinking in and I decided that fishing therapy was needed. Pike was the name of the game and I headed for my club stretch on the Avon at Alveston, having raided my freezer for a supply of deadbaits I've been harbouring for some time.

It was -1C on arrival, but it was still and calm and with my multiple layers of clothing, I was actually quite comfortable. With nearly half a gallon of warm drinks at my disposal and half a mile of river to myself, I was quite content. 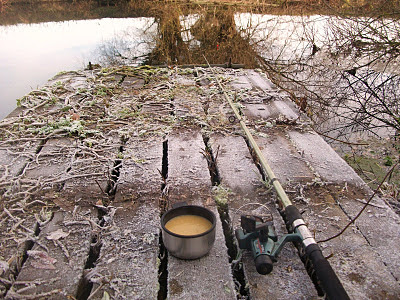 I fished for about 3-4 hours and only hooked up with one fish on a wobbled sprat, but I was more than happy with it. At 15lb 13oz, it was a personal best Pike for me, but I have to confess to being a tad lucky to get it in. The fish was attached via just one set of trebles and two parts of that ended up being almost straightened during the battle. Luckily they held out though and it gave me the simplest of unhooking tasks. 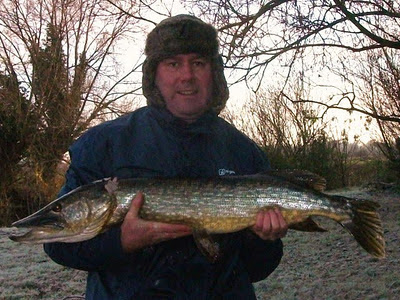 I did have a close call with another fish on a different peg that followed the bait up as I retrieved it through the water close in. It was a decent fish too - probably another double - and I was sure it would take the bait soon enough on another run through. It didn't though!
Posted by Sean at 08:41 2 comments: