A Bit of Solitary

A change of plan this week saw me and Brian on the Avon on a Sunday. In some respects it was a blessing not to be out during Saturday's rather damp and cool conditions. Instead we faced a coolish but dry day and a river that was about 10 inches up and coloured after the previous day's rain.

Usual tactics came to the fore with 2 feeder rigs with baits varying from maggot, worm, bread and meat. The Lamprey also came out of the bag in the hope of attracting a Pike.

We spent 4 hours trying to entice something, but precious little happened. Conditions certainly could have been a little better and any fish was going to be welcomed. In the end I managed just a solitary Bream of 2lb 15oz. 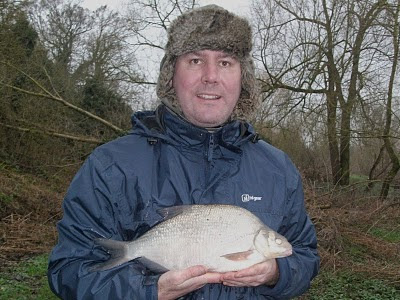 If nothing else, it extends my run of non-blanks to 3 now!

Next week sees an enforced lay off as we have a freebie to watch the Sky Blues take on Leicester City. I certainly wouldn't pay to watch them when I could be fishing, but the free food swung it!
Posted by Sean at 12:52 3 comments:

I pinched a Friday off work and had a day down on the Avon at Alveston with Brian. Boosted by a decent effort there last time out, I figured I'd got things sussed out. The weather was very pleasant and it was all set up for a productive day.

Things didn't go to plan for me though and the Chub and Bream I was largely planning for, didn't show up. It wasn't for the lack of trying though, but in the end I had to admit defeat and resort to the scratching tactics I'm more familiar with.

There were plenty of bites to be had on the float line and I amassed a few small fish to get me away from the intensity of staring at two pretty motionless quiver tips.

Brian had no success up to that point and was moving into the land of nod. A bite on his maggot rig saw him connect with a small fish that very quickly became a much bigger fish. A pike had scoffed whatever he originally struck into and he was left to pick up the pieces. "It's a double" he claimed, but I quickly dismissed it as maybe a 7lb fish and decided against getting my specimen landing out of the holdall.

How wrong I was! From my angle it didn't look huge, but when I had the task of trying to get it into a largish match style landing net, I suddenly started to get worried. This was a PB in the making for Brian and I didn't want to screw it up. Luckily the Pike played ball and went in first time - with a bit of a squeeze!

The size 14 barbless hook had lodged itself on the outside of the Pike's scissors and popped out easily. Despite a lot of willing, we couldn't get the scales to hit 14lb - Brian settled for a very respectable 13lb 15oz. Although not caught by design, Brian is taking credit for his Lamprey dripping approach. He'd already had a Lamprey section on the go earlier on and had a constant stream of juices oozing from it into his swim. Maybe that was they key? 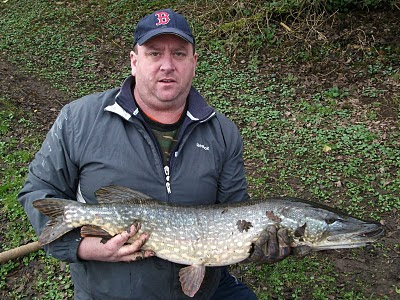 Brian's other main action of the day came on his bread rig - yes he had some success even if I didn't! A Bream of exactly 4lb graced his net. 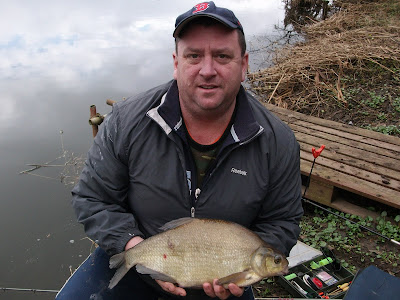 I managed 6 species in total - two of which don't count (Minnow and Bleak). The other 4 don't amount to a lot, but for the challenge scorecard purposes here goes with the best of each: 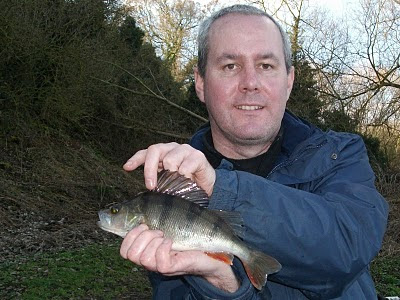 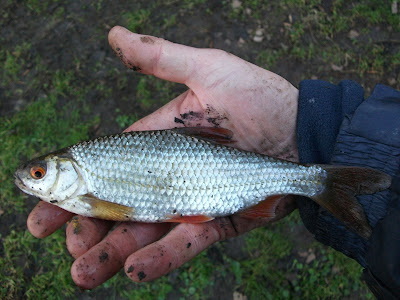 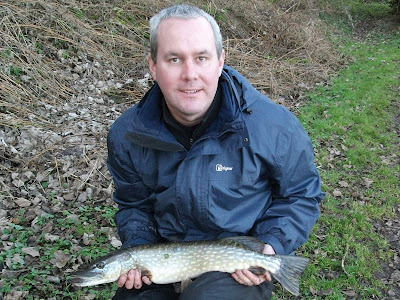 The Pike also fell to a Lamprey section fished close in under a float. Brian also had a tangle with another Pike, but the hook didn't set and fish got away.
A pleasant day though and the honours most definitely sit with Brian on this occasion.
Posted by Sean at 11:54 1 comment:

I was out on my own this week and the venue choice was made simple by the conditions. The wind was blowing a gale, so I headed off for the shelter that my club stretch at Alveston provides. There's a bank about 40ft high that surrounds the village section and blocks out any south westerly winds. So while all around was very blustery, I found myself in somewhat tranquil conditions for the whole day.

With my current run of form reading blank, blank, blank, blank I needed to fish a peg I had total confidence in. Peg 9 was the choice and was actually the last peg I caught on at the back end of December. 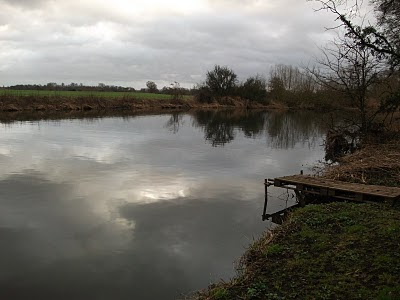 I set up two feeder rods using a concoction of about 4 parts liquidised bread and 1 part fishmeal based groundbait. I've become a bit more organised recently and I'm starting to freeze up any old bread that would normally be binned. I'm then liquidising it as needed the day before I fish. The freezer is also housing a supply of deadbaits too, in case I fancy a spur of the moment predator session.

I fed the bread mix through both feeders, but opted for different hookbaits - bread flake on a size 12 on one rod, with 2 or 3 maggots on a size 15 on the other. I tend to use the odd numbered hooks in the Kamasan b711 range quite a lot for my maggot fishing. Both rigs had tails of about 2.5ft to 3lb bottom.

I decided to cast fairly regularly to keep the bait going in and I didn't have to wait too long for my first bit of action on the bread. The tip pulled round and I just needed to lift the rod, which was met with a fairly stiff resistance. I knew it was a decent fish and I was hoping it was a Chub, as it would definitely be a personal best.

I played it carefully and when I got a glimpse of the fish I could see it was a Carp. Although a little disappointed that it wasn't a Chub, this was going to be a first for me, as I'd never previously caught a river Carp. The fight went to plan without too much fuss and the fish was banked. It weighed in at 6lb 2oz. 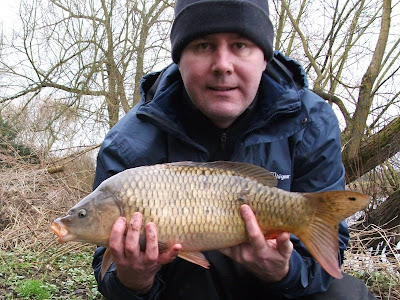 Not a monster in Carp terms and in challenge terms, it's not going to make much of an impression either. As I joked to Brian in a text, I'd get more for a 3oz Dace! In this instance though the figures don't really matter - it's nice to put the river Carp issue to bed at long last and more so at this time of the year when my fishing has been very barren. Suddenly 4 blank weeks became a distant memory.

Things didn't really take off though and after a couple of hours I decided to rest both lines and have a mess about with a float rig. I managed a small roach that I didn't weigh - I don't think it would have made 1oz, before snagging up my rig and losing the hook. I then saw a decent fish top on the feeder line, so I went back out there again. The difference this time was that I switched the rods over and fished bread on the right hand rod.

A steady run of fish then started - all taken on bread: 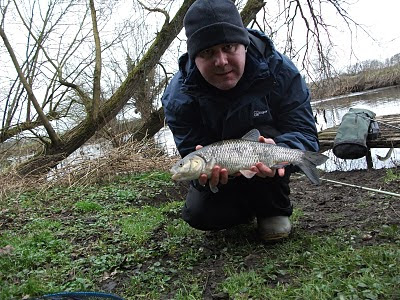 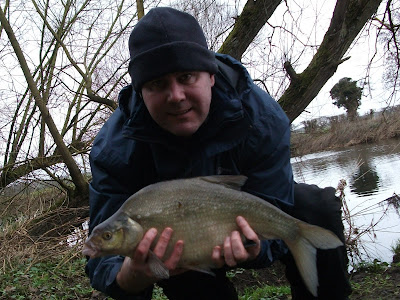 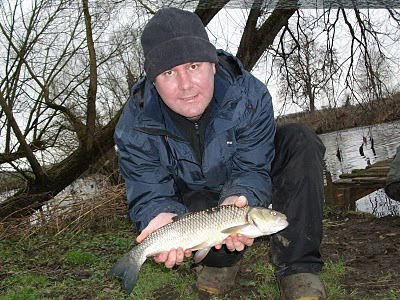 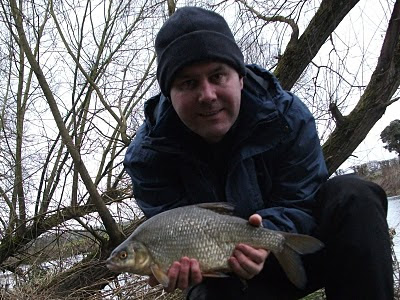 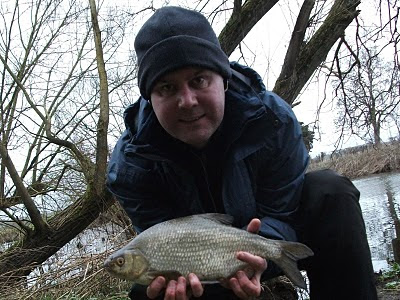 Smack on 20lb in total, which I'd take any day on a river. I packed in around 4-30pm and went home very content. 57 percentage points on the challenge board, but in all honesty if any of these fish remain on my scorecard at the end of the year, something will have gone badly wrong. It's just a relief to be catching again.
Posted by Sean at 10:44 2 comments: