Another year begins, but the weather has continued to keep me off the rivers throughout most of January. A frustrating period really, particularly as I had some extra time off from work into the first week of the new year. Lots of potentially good fishing time wasted spent working on the house.

I eventually kicked off my 2018 exploits a fortnight ago. The river was fining down nicely, and, with the Blogger's Challenge in mind,  I fancied a crack at a chub. My meagre 3lb 2oz offering needed an uplift.

Was it worth a go though?  A quick text to Mick for an update on his trip the day before, confirmed what I wanted to hear. Plenty of chub had shown up, albeit to no great size. But, bigger fish are there and regularly show up - often on Mick's blog! 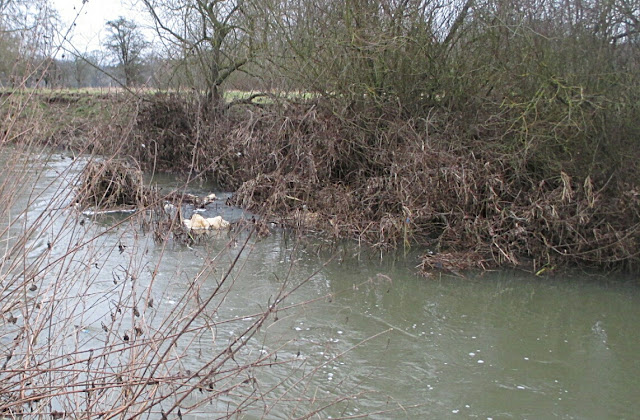 For me it was a bit of a stroll down memory lane. Although I've never held the club ticket during my blogging years, this was one of my favourite stretches during the 90s and 00s. It wasn't a triumphant return though. Despite feeling ultra confident, four hours of endeavour taking in three swims, saw nothing in return. My 8th blank in 10 outings was in the bag.

Last week was a simple write off with some pretty horrible wintery conditions pushing through. I spent most of the weekend in a cupboard under the stairs! Not banished there by my good lady I might add, but giving it a post boiler installation makeover. Not the most exciting of times, but it was all in a good cause - more room for my fishing clothing and accessories. Still need to install a shoe rack for my wife though. I'm sure she'll remind me soon enough!

On to this week and it was touch and go with the rivers, Saturday was ruled out anyway, so Sunday was the only option. The weather looked good - breezy, but very mild, cloudy and dry all day.

I went to bed Saturday night with a simple plan - wake up whenever and figure it from there. With my wife also keen to have a chill out day after a long and busy week, it was a relaxing change.

A lie in was inevitable and I didn't venture out until early afternoon. I was only interested in the last couple of hours of daylight, so I took it really easy. The last ENG v AUS ODI cricket match proving to be the perfect reason not to rush out.

I didn't wet a line until 1-30pm.  A two rod approach to begin with. Standard tactics for me on both rigs - a big smelly lump of meat, hair rigged on a free running set up.

Nothing showed in the first two hours. As the sun slipped lower, I retired the upstream rod to make sure any hint of a bite on the preferred downstream rod, would be nailed instantly.

Whether by luck or judgement, it took less than 5 minutes for a proper tug on the tip. I pounced quickly and a quiet start to the battle had me thinking chub. It soon turned into a barbel though and a hard but incident free battle was played out. 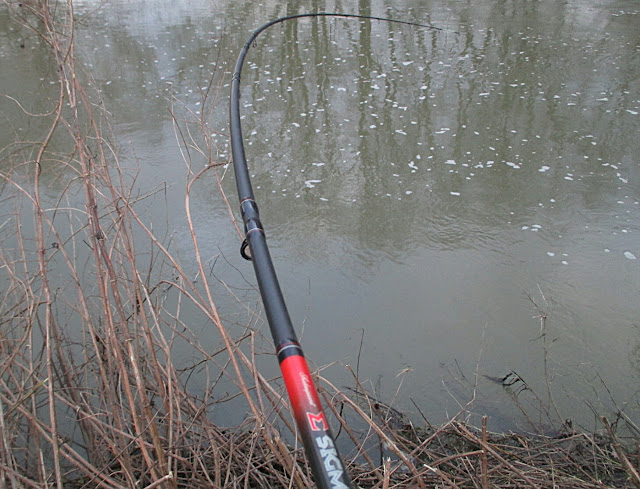 A typical, solid, clean looking fish that caused the Avons to do a full circuit. They settled on 10lb 12oz. Nice to start the year on a double. I hope it ends like likewise! 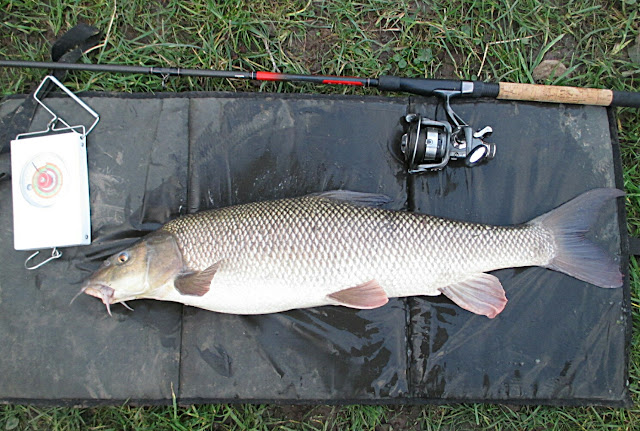 I nearly called it a day, but as I still had a good hour plus of daylight left, I plodded on in the hope of more.

Definitely a chub this time, but although it didn't look the longest, it was a solid old fish. Clearly a season's best, but by how much? 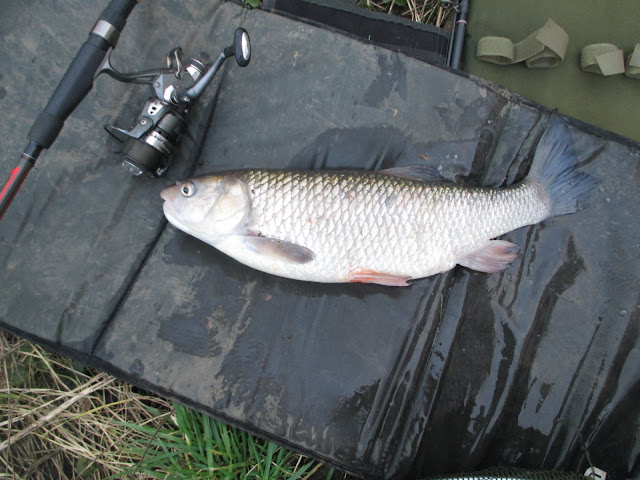 4lb 4oz took me by surprise - so much so, that I zeroed the sling and reweighed it on my backup scales. Same outcome. With my meagre pb only being an ounce heavier, this one gave it a close run.

The week ahead looks unsettled and that's not really what I wanted. Time is running out for the rivers and I still haven't got a respectable pike to my name this season, nor even a zander of any size. Still hoping though...
Posted by Sean at 14:09 6 comments: