Back to Snitterfield again today in the hope of putting the record straight after a poor session a few days earlier. 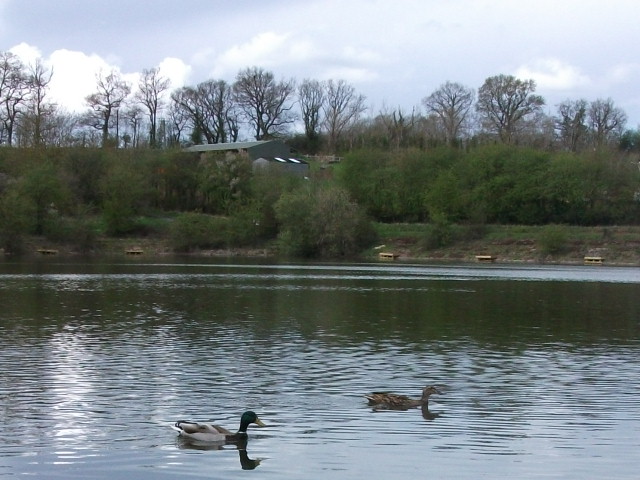 I wasn't going to scale my gear right down, so it was much of the same, but with a bit more finesse in terms of the feeding. I've become a bit of a ball it in merchant in recent years, which is fine when the fish are really in the mood. Today I went for a more softly, softly approach. It seemed to be paying off when I hooked a couple of nice stamp Roach in the first hour. 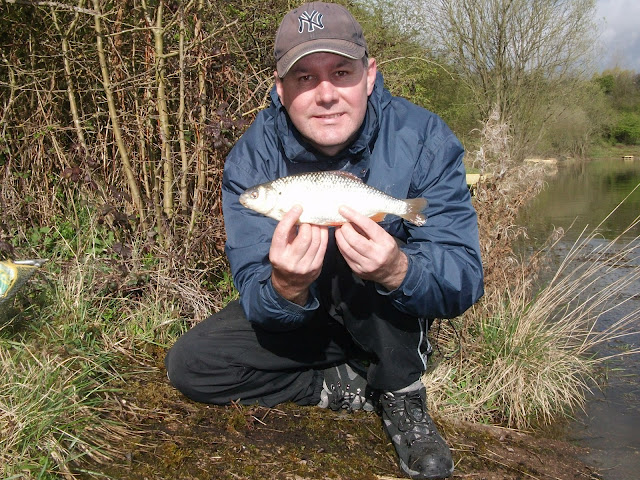 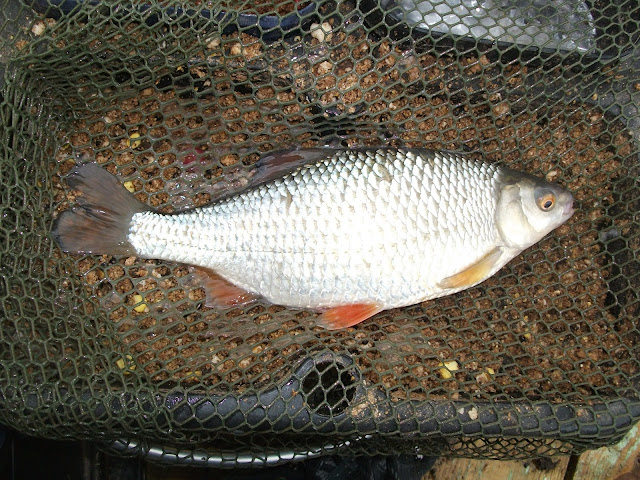 The one at the top went 15oz, with the other one going 14oz.

I only managed two other smaller Roach before the fish shut up shop completely. I couldn't buy a bite no matter what I tried. In desperation I fed the area again a bit more heavily, with the hope that maybe a Carp might show up to the sleeper rod (which saw all manner of baits tried).

All attempts to get the fish feeding failed miserably and other anglers were also reporting similar fortunes. It's possibly still a shade early in the year for the Reservoir. I'll give it a few weeks to settle down before returning.
Posted by Sean at 12:04 1 comment:

Good Friday saw me tackling Snitterfield Reservoir with Brian. There had been an overnight frost and the impressive new platforms were sporting an icy coating. 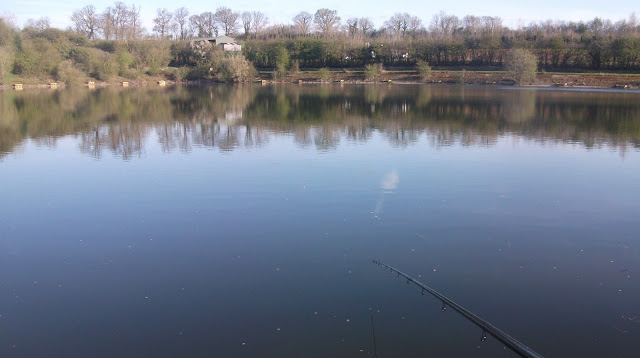 Now it might have been Good Friday, but for me there wasn't a lot of good to come out of it. But for a turn of fate at the end of the session, this was a trip destined not to make it into a post of its own.

We both struggled for the whole session, suffering all manner of finicky and seemingly unhitable bites. I'm sure that a more delicate approach with a pole, fine hook lengths and small hooks would have seen more fish on the bank.

However, once bitten twice shy. Snitterfield has a few lumps in it and if you hook them on light pole gear, it's generally only going to end one way - the fish wins. I've experienced it there before and I now like to use rod and line to give me a better chance if a Carp puts in an appearance.

Although struggling to catch anything, my approach seemed justified when something relatively large picked up the double maggot hookbait and tore off at a rate of knots. 5, 10, 15, 20 yards of line was ripped off the reel and it wasn't stopping. I was fishing a size 20 to 2lb bottom, so I couldn't really apply much pressure. I had no choice but to get off my backside and chase the fish around the reservoir.

I ended up a good 50 yards to my my right but never got an ounce of control over the fish. In the end we parted company when it headed towards the now disused pier and I had to crank up the pressure. The annoying thing was that my sleeper rod which was geared up for the Carp, went totally ignored for the whole session!

We'd pre-agreed that the session would end at 3-30pm, but I managed to convince Brian that we needed another 15 minutes. It was lucky that I did, as it was during the extra time that Brian connected with a Carp on his float rig. It gave him a right old run around, but he eventually got top side of it and landed a clean looking Common Carp of 9lb 11oz. 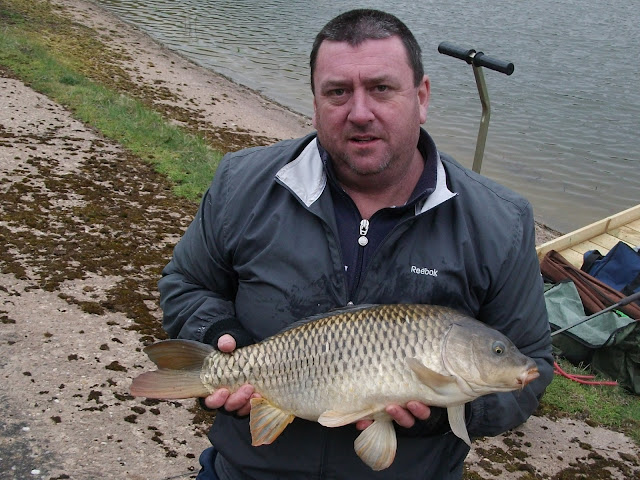 A poor day for me on a water that I know is perfectly OK and has produced for me in the past. I just wasn't able to crack it on this occasion. I'll rethink my tactics before tackling it again soon.
Posted by Sean at 12:57 1 comment:

Saturday came around and I woke up with a bit of a thick head from the night before. I'd been out on a mass works leaving do, courtesy of a company's desire to make "progress" by closing down our office. I've been lucky to find similar work at a local college, so it's not all doom and gloom by any means. It's just been a bit weird being back in the job market after 22 years with the same company.

Anyway, a couple of tablets, a few glugs of water, an extra hour or so in bed and I was ready to head off fishing. I opted for College Pool in the hope that one of its bigger Perch might put in an appearance in the favourable overcast conditions. I didn't arrive until 10-15am and was surprised to find the place deserted. I settled in at the far end of the pool on a peg I haven't fished for a while. 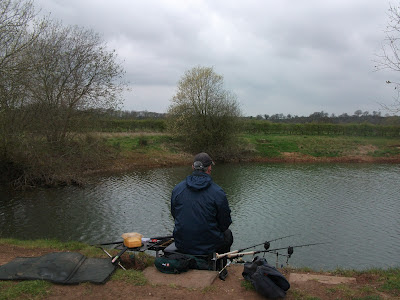 Things started slowly, but eventually the fish found my bait and I ended up with a mixed bag. Unfortunately it didn't include any Perch. A Roach and a skimmer kicked things off before the Bream moved in. The first one was 4lb 15oz. 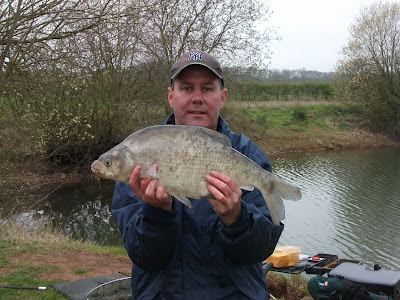 The next was smaller at around 3lb. 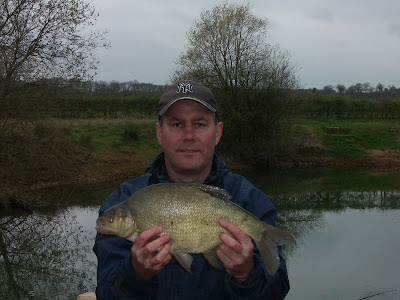 A feisty and pretty little Carp was next to be banked. 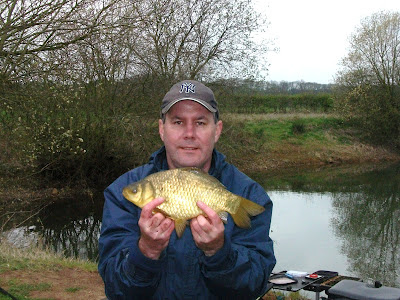 I then had a mad couple of minutes when I landed a Bream. As I lifted the net, the alarm went off on the other rod. I then had to land the second fish with the Bream still in the net. Fortunately it was only a small Tench that was easy enough to slot into the net. 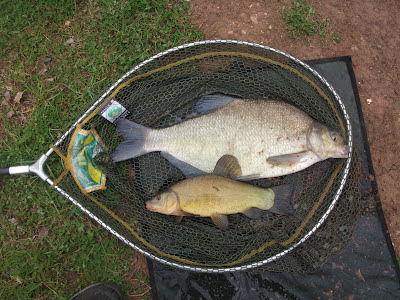 I managed one more Bream, which bizarrely also weighed in at 4lb 15oz. 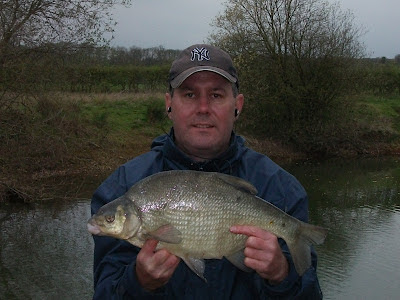 No Perch, but a pleasant enough day yielding close on 20lb of fish. Oh, and Coventry City finally won a game away from home to pull clear of the drop zone, which made for some nice listening through my ear piece!

In response to Ian's comment, I've added a further image of the Carp below. 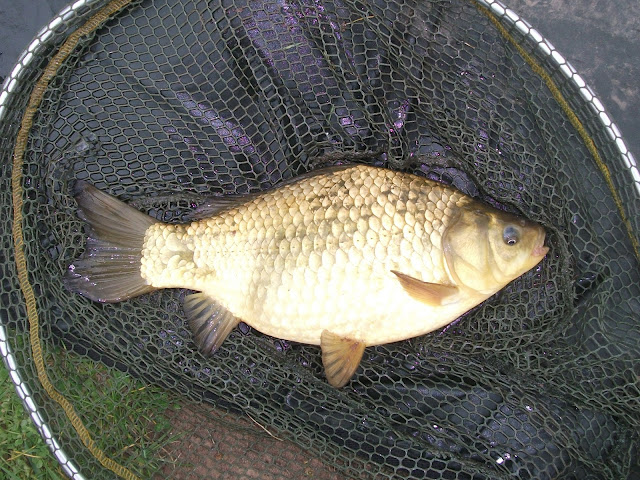 Initially I also wondered if it was a Crucian and I actually took the extra photo and weighed it in to be safe - it was 2lb 5oz, which would easily be a pb for me. I looked at other images of Crucians and I wasn't comfortable to claim it as a true Crucian. That said, it does stack up quite well in various aspects of criteria listed on a site I visited http://www.crucians.org/html/identification.shtml

The missing scales towards the tail end don't help with accurate scale counting though. I'm no expert  and would welcome any positive identifications from those more in the know. I note that the site suggests that Crucians can vary greatly in profile. I always think of them being like this one I had last year. 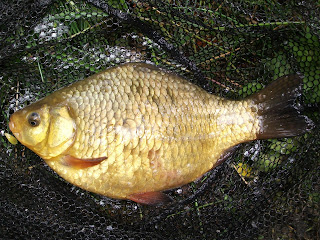 .
I should add that the pool in question has no history of Crucians to my knowledge. I know fish are occasionally stocked in there from a local pond and I once even caught a fan tailed goldfish, so I guess anything could be in there!
Posted by Sean at 13:40 7 comments: