I managed three sessions over the past week, but like the England cricket team, it wasn't very productive.

The Anker was given another shot and I carried out my promise to ball it in this time. The result wasn't the specimen frenzy I'd hoped to induce. I completely bombed out and the only respectable fish banked was a perch of around a pound and a half. 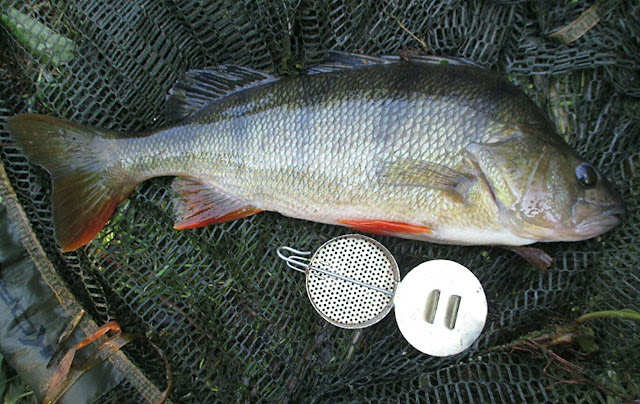 The pike, or more likely a single pike, taunted me. Fish were snatched and hooklengths severed. Scoff though they might for now, the odds will change somewhat when the first frosts appear. Soft mono is replaced with wire, hooks get a whole lot bigger and rods are much beefier. I'll be back!

Some good information was gleaned from a venue regular and the tales of bream, carp and tench had me salivating. I guess I just need to put the time in and be patient. I like what I've seen, so I will be giving it every chance for sure.

The Avon was a little more responsive to more sympathetic tactics,  yielding lots of small fish. Like the Anker session it was completely at the wrong time of day. I was expecting a tough one, but was surprised to see fish feeding throughout the heat of the day. There's such a good head of fish present right now and it looks promising for the predator season in a few months time.

I took some time out to clean up pegs across the whole section. Being on the committee it's something I like to do, but it amazes me how reluctant other anglers are to keep things ticking over (but they are quick to moan!).

For years now I've always carried a small sickle in my kit and most pegs I fish are treated to a quick trim to help keep them in shape. Just a minute is all it usually takes. Sickles (or similar tools) can usually be picked up for peanuts at car boot sales. Well worth the tiny investment to help give a little back.

There was one notable success on the day as I helped steer my companion for the day towards his first ever pike - in fact the first he'd ever seen in the flesh. It wasn't a bad one either at 8lb 12oz. I'm not sure he's completely converted yet though. I think he enjoyed the fight on a light telescopic rod, but the sharp pointy things in the Pike's mouth were less appealing! 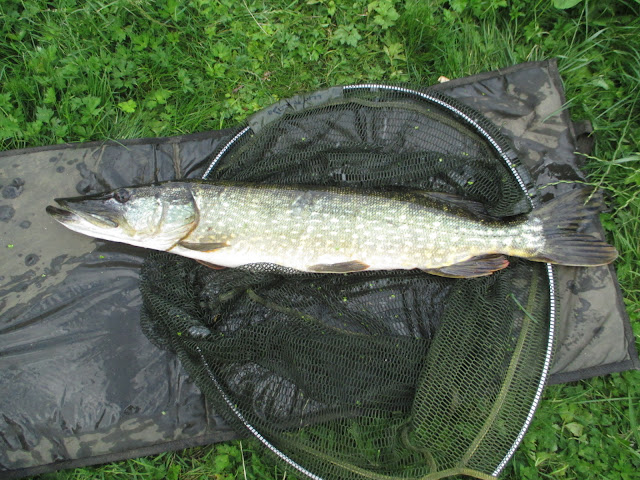 The final venue this week was the more intimate Leam. Being honest I wasn't relishing this one and I thought a grueller was on the cards.

With Brian joining me for this one we dillied and dallied over which section to fish. Checking out all three options in turn, we eventually returned to where we started! The section in question is pretty new to both of us - we'd only tried it once previously. 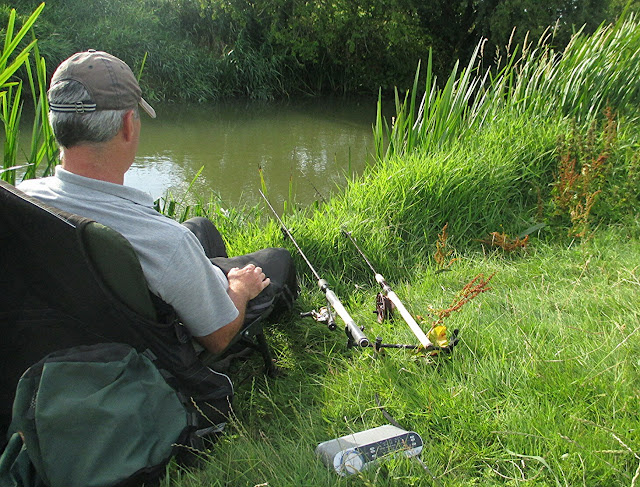 I had a bite first chuck on the lead. Not expecting quick action, I missed it of course, but a small perch quickly followed. Things went quiet and I set up a stick float, as I couldn't resist getting the pin out and running a bait down the swim.

First full run and the float buried. The rod arched over and something solid was on. I took it carefully, but never saw the fish as I suffered a hook pull. Gutted, but it actually made me more positive.

I pressed on and half an hour later banked a pristine and slightly portly chub. At 2lb 11oz it's no monster, but it was a venue best for me and in immaculate condition. 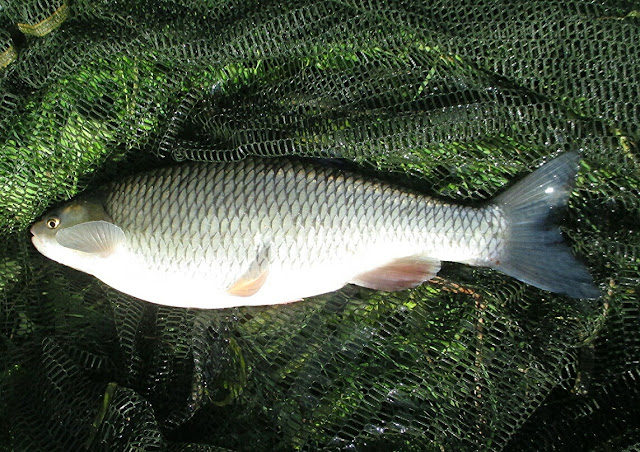 Another venue best surfaced next cast in the shape of a 2lb 2oz perch that put up a right old scrap on light gear. 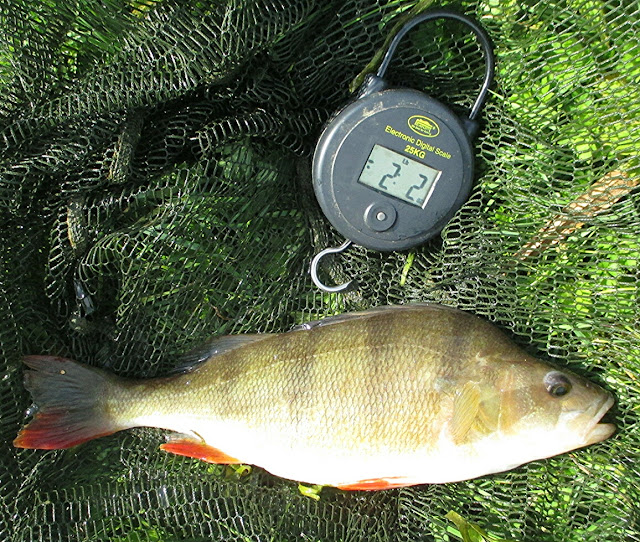 A tiny dace and another small perch followed before the swim completely died. I remained biteless for the last couple of hours, as did Brian. He'd had a couple of pound chub and some bits beforehand.

It was actually a pleasant short session in the afternoon sun, albeit tempered a little by the incompetent effort of England's cricketers. Hopefully they'll put up a better show next week, as I'm making my maiden test visit to Edgbaston during the third test. Sucker for punishment?
Posted by Sean at 13:48 3 comments:

As suspected, I had a lay off from my fishing last week. Not what I wanted at this time of year, but married life brings committments that require a bit of give and take. I guess we can't fish every week if we want to stay married!

After a run of six sessions on six different rivers taking in four counties, I made my first repeat trip. The Anker was the venue and Brian joined me for his first crack at this river for an afternoon / evening session.

On approach to the river my jaw hit the floor. I was greeted with this sight and I can tell you it gave off a right old stench. 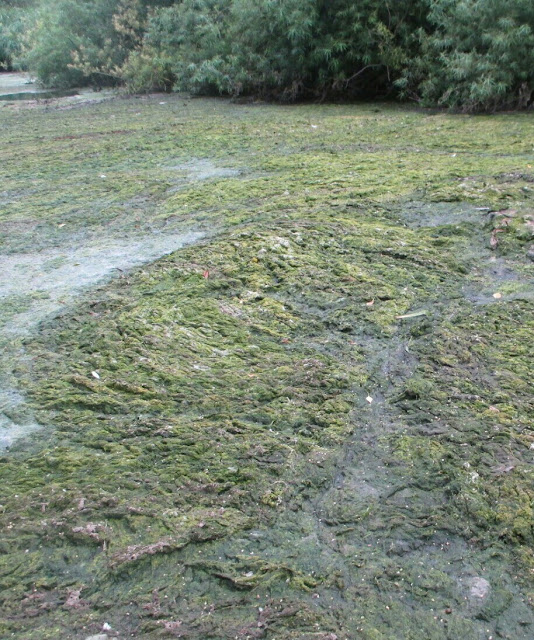 Three weeks earlier I had fished that peg and it looked like this. 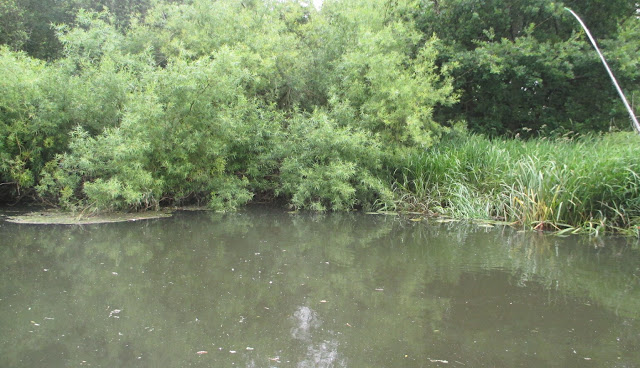 I continued downstream and fortunately the river started to open up. Clearly there was a blockage in the river, but beyond it there was some flow and a bit of hope. Crucially we feasted our eyes on the clear signs of feeding fish - some of the most intense bubbles I have ever seen. Spirits quickly lifted.

I never really know what to do when fish are clearly grubbing around in your swim. Should I ball it in and risk spooking them, or is a softly, softly approach better? I went on the cautious side and eased the bait in throughout the session.

I started off with corn and switched to maggot, but over 30 minutes in and we were both biteless. I had been laying on with the stick about 6 inches overdepth. I took the extra depth off and tried again. First cast and the float buried.

It didn't feel big to start with but then it started to crank up. I thought it might be a small tench, but it was actually a big and very dark coloured bream which was a pb shaker for sure. I could see it was lip hooked so I took it carefully on the 3lb hooklength and banked my prize.

Brian thought it might push towards eight pounds, but with a hint of pessimism I thought high six. Either way my previous best of 6lb 5oz was definitely beaten. Brian loaded the net and zeroed the scales. I placed the fish in and waited for the verdict. 7lb 9oz was the result, so it was pretty much in the middle of what we guessed. 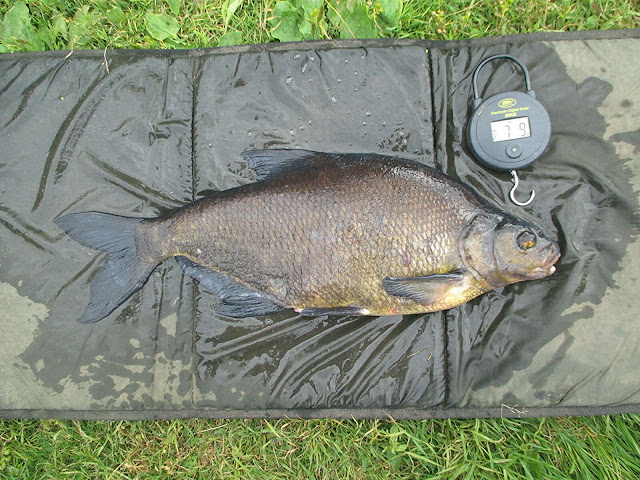 With a willing photographer available I tested out the arms out effect. I don't usually push my arms out when being photographed, which tends to make even half decent fish look less impressive than you'd imagine them to be.

The following two pictures are of the same fish, but one looks so much bigger, yet I remain in a fairly similar proportion in both. 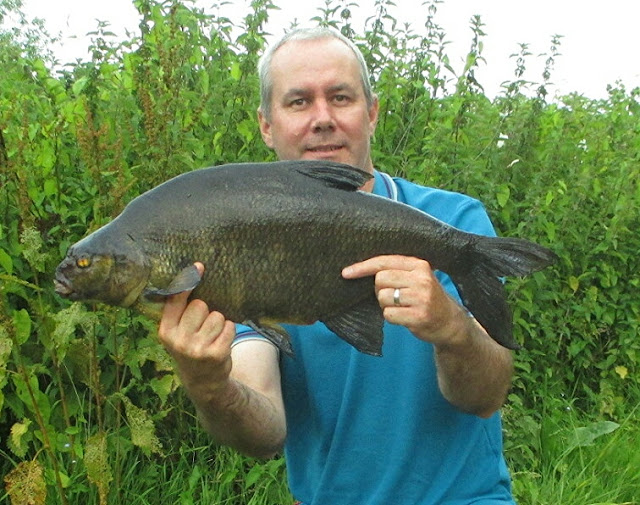 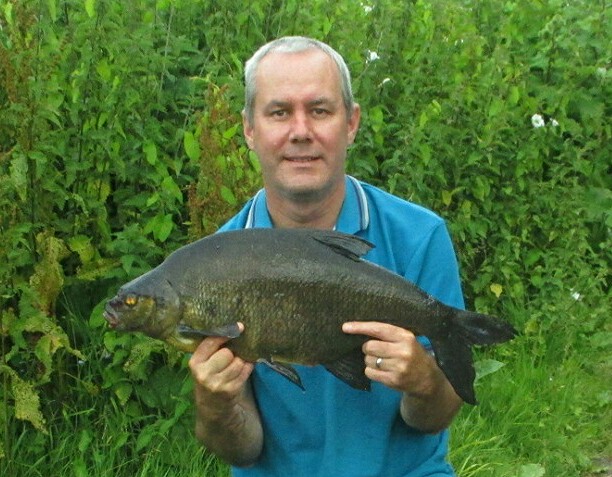 The rest of the session wasn't prolific for me, but I had some roach and perch, with the best knocking around the pound mark. 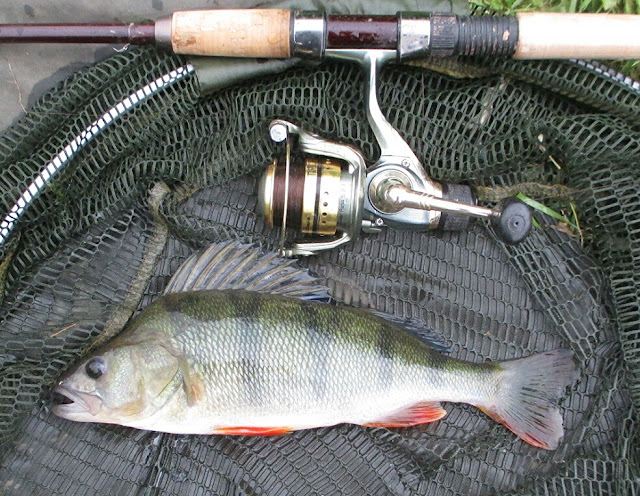 Brian was kept busy with plenty of roach on the next peg, but that in turn caused him to acquire a friend in the shape of a feisty jack that kept snaffling fish throughout.

Late in the day I hooked another lump and I confidently predicted tench due to the scale of the battle. Snagged deep in the lily pads I eventually got it out, but it had now turned into a bream! Brian clocked that it was foul hooked and the mystery was solved. Cranking up the pressure it went into the net sideways on and the hook pulled clear just as the net was lifted. It went 5lb 10oz. 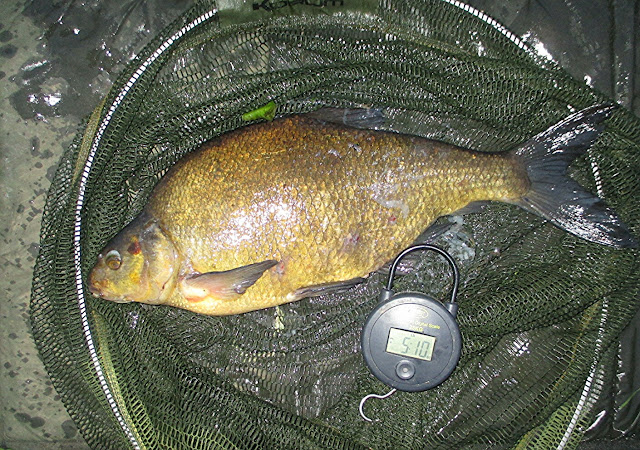 With light fading the last action was left to Brian as he finally got one over the pike that had taunted him throughout. The funny part of it being that we could see the pike wasn't hooked, but was stubbornly ho!ding on to its prey. It eventually let go when safely in the net and both fish survived the experience. 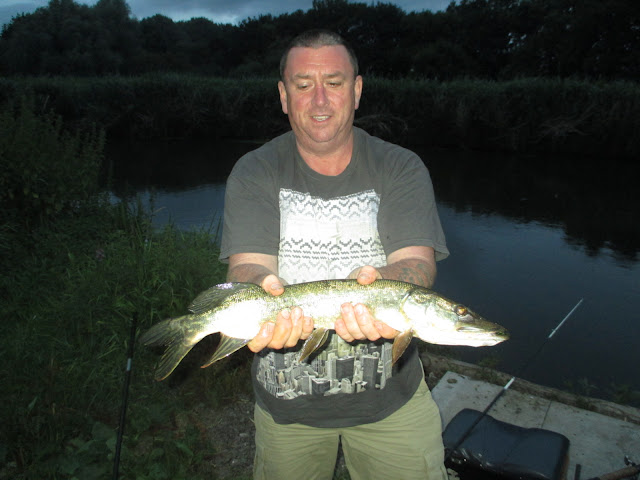 An enjoyable session and I'm learning more about the river now. In hindsight I think I should have been more positive to start with and next time I think I'll ball it in from the off.

The good news for me is that I have a bit of time off this week, so I'll be aiming for a couple of midweek sessions amongst my other plans.

I've also had my eye on an estate lake that caught my attention earlier in the year. After a short period on a waiting list my number came up, so I should be in business soon. It's the wrong time of year for me in all honesty, but the plan is to secure my ticket and then I'll have somewhere to target during the next closed season. I have no idea what it holds, but that's all part of the attraction for me.
Posted by Sean at 13:00 2 comments: