My fishing year ended in a very tame and unsatisfactory manner. No more need to berate the overly dry conditions. The weather had the final laugh to a very forgettable Autumn campaign. Two planned river sessions cancelled for obvious reasons: 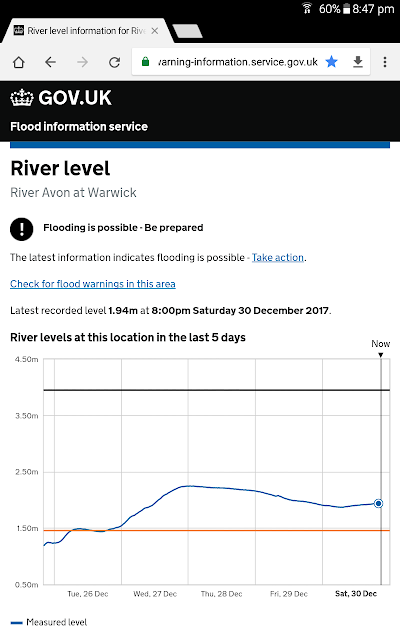 To add to my woes, my long suffering boiler (not a reference to my wife!) finally gave up the ghost in the week before Christmas. No longer cost effective to put back into service, a new one is now being scheduled in. Fortunately we've been able to get hot water via an immersion heater, or it would have really tested our resolve.

Just one quick session to mention since my last post. It was my traditional Christmas Eve session - just not on Christmas Eve this year! My wife had booked me up for that already with family duties.

So, a day earlier than normal, I headed off to a decent looking Avon for a dawn start. No excuses, but it proved a difficult nut for me to crack again.

Martin turned up soon after and wasted little time in getting his spool turning. Not the planned ending though as his hooks went skywards and he was left playing a tree! He soon had a jack on the bank though to make amends.

My blank was avoided with my only bite of the session. A jack with an unsightly wound, so I'll spare it from a public appearance on here.

I called it a day at 11am, by which time Martin had upped his count to three, the best one being around double figures. He went on to add a couple more. 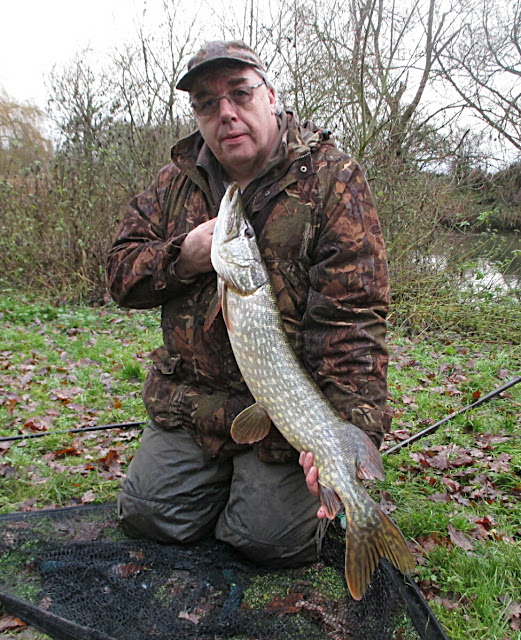 I have an extended break this year and I'm hoping it won't see me consigned to decorating throughout. If the river drops to the right level, I'll continue to look for pike and zander. If not, temperatures permitting, I'll definitely open the year with a session on a stillwater that I was saving for Spring.

2018 promises to be an interesting one for me in many ways. Lots of distractions that will potentially interfere with my time on the bank, but I'll certainly be out at every opportunity. My only fishing resolution is to do more of what I didn't do this year!

I had some good intentions that I didn't follow through on. Quite why I've ignored tench again is just plain daft, given the options I have in my ticket wallet.

It's over a month since I last checked in and let's just say that things haven't quite gone to plan. How bad you ask? Let's try a picture clue to sum up my bankside activity... 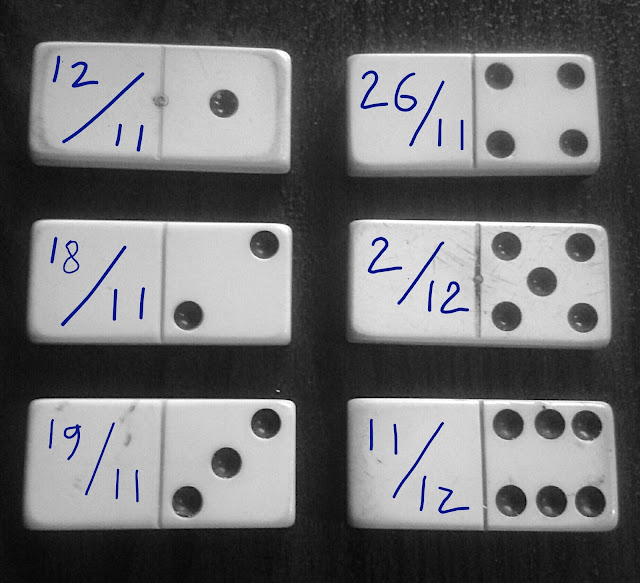 Having only ever suffered a maximum of three blanks on the spin before, I really didn't see this lot coming. Granted, conditions haven't been great, the sessions mostly short and I've perhaps been too blinkered in my approach. Still, I expected a little more than zilch. 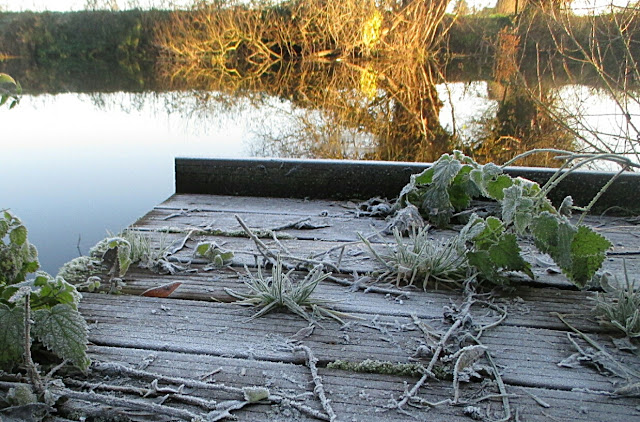 All were predator sessions in gin clear water. Three were actually completely barren - zero bites. The rest had some bites, but frequently all too tentative. A nudge here, an enquiry there, the odd strike into thin air. Occasionally connecting, but then disconnecting, as hooks are spat back in anger. 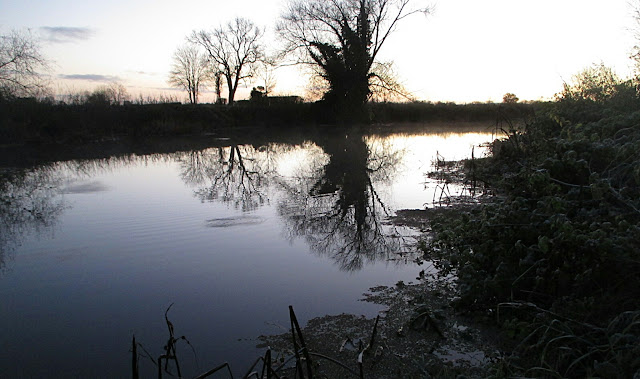 The sixth domino was played out on Monday past. A bonus session borne out of the recent snowfall. I'm lucky enough to work in education, where establishments close when the white stuff falls to any reasonable degree.

This was fate I thought. Finally a chance to get a long-standing monkey off my back - a snow pike. Opportunities for snow fishing don't present themselves all that often around these parts, so I needed to choose well. A tried and trusted venue would surely deliver?

You know the outcome of course. Not a sniff. 4+ hours of zero action. Nothing moving anywhere. Dejected, I quit early afternoon and headed home to do a refresh job on the bathroom. Exciting times! Extra dominoes were being contemplated. 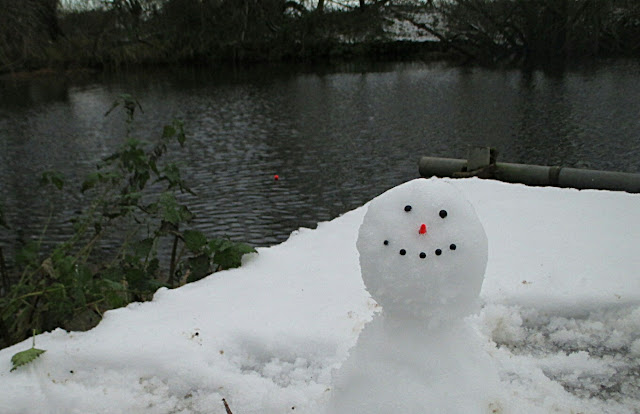 Tuesday dawned and confusion reigned. Employer optimism of opening was quashed, but I was summoned to another campus that had beaten the weather. A useless exercise though, as I had no access to the essential tools of my job. A day of pointless time filling and coffee drinking didn't thrill me. I needed out.

After a brief and sensible chat, a mutual agreement was struck up with my boss. Rather than me lingering around and moaning all day,  I'd bugger off quietly and use up some time owed to me. Much better for all concerned. Snow pike take two was now in operation.

Back to the river, but a different stretch. A more public venue and one I've never predator fished before. I just needed a change to rekindle some fresh optimism. It's a venue I've fished occasionally over the years, albeit not for quite a while. 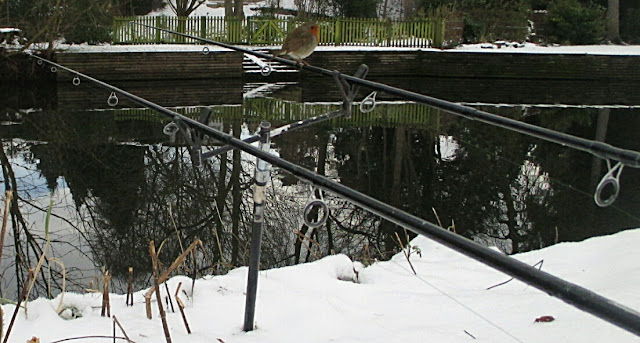 A chilly day at -2C on arrival (although better than the -6C earlier that morning). It didn't rise much either - just tripping around freezing point when I packed in.

I knew a likely area with a mix of depths and features. I'd spend a few hours hopping swims, covering as much variety as possible.

Swim one nearly yielded success just as I was planning a move. A bob of the float on the smelt rig, then a few more indications, before a clear pull away. A strike, slight resistance and then a hook pull followed. Bugger!

I sat it out a while longer than I'd intended, but nothing else showed. Time to find some deeper water that I knew was a few pegs downstream.

Sardine deployed to the left, I then guessed a little conservatively with the smelt rig. The float was around 10 inches out and fully submerged. I reeled in to adjust it and the float fought back!

I must have dropped the smelt bang on the money. I set the hooks and played out the fight. Brisk and thankfully uneventful, I had broken the run of blanks. A snow pike at last and although a long way short of my target, a season's best at 9lb 12oz. Quite a long, lean and clean fish. 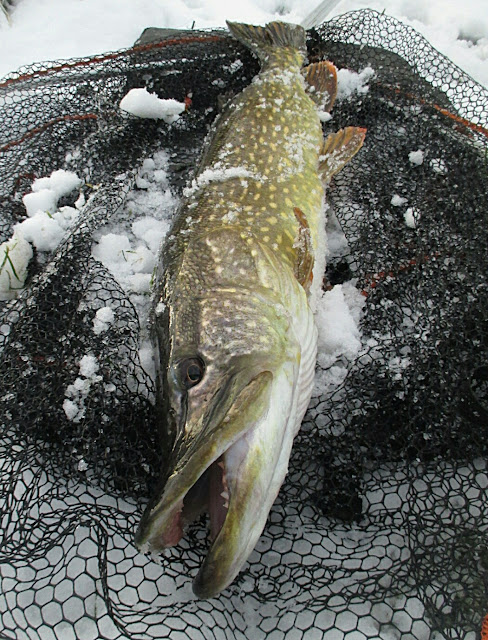 Not the perfect trophy shot I'd have wanted, but the snow was very iced up and pretty solid. I wasn't going to risk damaging the fish through self indulgence.

Nothing else for the reminder of session. Just feathered company that's clearly well practised in the art of scrounging from anglers. 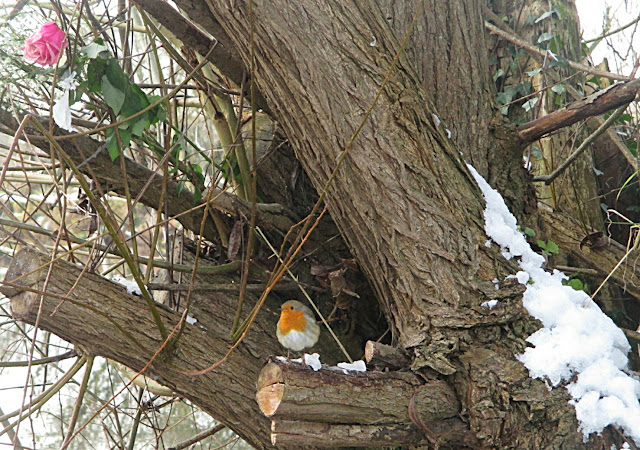 Prospects for the weekend are interesting, with some milder air threatening to push in. The cold snow melt (with added grit) currently in the rivers might be the defining factor. Coloured water will be a rare luxury though.

I'd resigned myself to a weekend off, but with the rivers now dropping, I'm tempted to make a last minute change of mind. The gear is ready just in case, as are the dominoes...

Edit - Sunday morning. 6am, phone says it's 1C. River still a little higher than I'd like for the temperature. Significant rain due late morning. England still floundering in the cricket. Not much to get up for.

A lie in and then finishing off the Christmas preparations was the more sensible option. Plenty of time for fishing over an extended festive break for me this year (around family commitments of course!).
Posted by Sean at 13:17 5 comments: