A Sunday session for a change this week (yes I'm still car sharing!) and with cold weather predicted I decided to pursue Pike again on the river. It was 0C when I arrived and it felt a bit cooler than that with the wind chill.

The river was the lowest I'd seen it in months - perphaps within an inch or so of normal. It was still carrying a nice tinge of colour too. I felt a strange, perhaps misplaced, confidence, on what seemed like a new river. I'd actually been like a child waiting for Christmas morning over the previous couple of days - knowing for once that I'd find the river bang on, rather than having to battle against what it was throwing at me.

I had the section to myself, which is par for the course at this time of year. I went for my usual plan of starting out in one of the banker pegs (also the shortest walk) and then I'd move further upstream taking in a few other pegs, before working my way back over the same ground.

I kicked off with 2 floatfished deadbaits and worked my way around the swim, alternating Lamprey, Smelt and Roach. 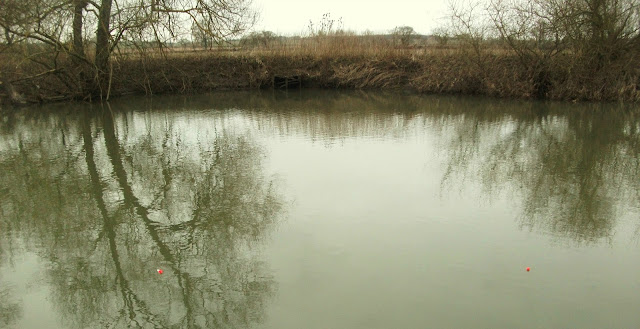 An hour or so in and nothing was happening. I moved to the next peg and repeated the dose. Same result! Things weren't going to plan.

Time for another move to the next peg, which was a tighter peg and only suited to 1 rod. Although halving my options I don't mind giving the peg a chance as it has thrown up a mid double for me in the past. Not today though!

I had one further upstream move in mind, but I before I went for it I moved back a peg and made the best decision of the day. I broke down one of the float rigs and set it up for wobbling a deadbait - just tying on a trace and pinching on a couple of swan shot directly above it.

To cut that wobbling story short, it failed miserably across all 3 pegs I tried it on. So why was it such a good decision you ask? When I settled back down to a static approach on the penultimate peg of the day, I now had a float rig and my wobbling rig. The advantage of the wobbling rig is that it's also ideal for legering deadbaits in the margins.

After about 5 minutes I noticed the line twitch on the legered set up. The line tightened briefly, went slack again and then fully tightened. Fish on at last! It put up a good scrap while it remained deeper in the water and I was thinking it might be a double. It surrendered tamely when it hit the surface though, at which point the double went out of the window.

It was a clean fish of 8lb 6oz and is a step in the right direction, albeit a long way short of the mid/upper double I've been aiming for this year. 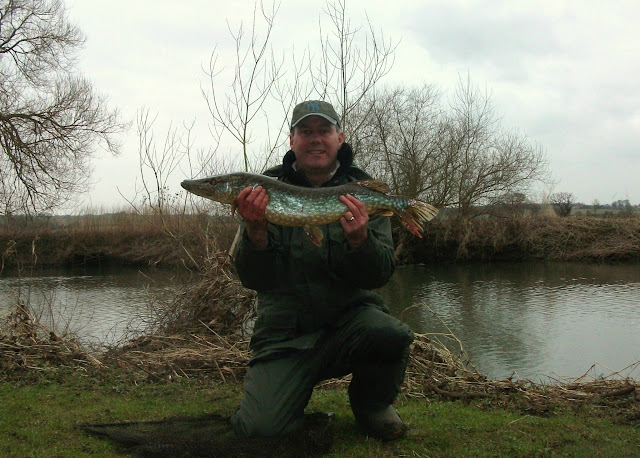 That was the only fish, but on a bitterly cold day I was happy with anything.

It looks like we're in for more of the cooler weather this week, but thankfully not too much of the wet stuff and the frosts aren't too severe either. Dare I tempt fate and look forward to the river being in decent nick again next week?! My car situation should also be sorted out by next week, which will be a great relief. No more asking to be dropped off or having to ask permission to go fishing!
Posted by Sean at 10:22 1 comment:

Just happy to be fishing

﻿
Three weeks have slipped on by since my last post and my fishing has been very much on hold. I fell foul of a very nasty bug a couple of weeks ago that completely wiped out a whole weekend for me.
Around the same time my Mondeo developed an engine management fault completely out of the blue. The repair costs are too high for what the car is worth, so it's being written off. For now I'm relegated to car sharing with my wife which means that I can't just head off when it suits me.
With the car situation I was in, I decided to avoid last week's sleety/snowy conditions, despite the river being somewhere near normal. I decided to get further ahead with decorating the house, which is time well spent if it frees me up for fishing when some half decent weather eventually arrives.
The thought of having three weekends off fishing was a bit too much to contemplate, so I managed to squeeze in a quick session at Ryton Pool. Prior to the session I'd been down to the fishing show at the Ricoh Arena. Once again it was a very decent show with a good range of goods and I stocked up on plenty of smaller items. A fair amount it will no doubt end up in the River Wye later in the year!

Back to the fishing and I had been dropped off by my wife on her way to visit family in Rugby. It was a weird feeling as it's the first time in my life that I've ever been dropped off for fishing and just left to get on with it. When you normally have the scope to drive to another venue at will and to choose when you leave, it's a culture shock to know that you're in one place for a set time. On this occasion the weather was good and the session was only going to be 3-4 hours, so I knew I'd be happy enough anyway. I really want another car soon though!

Given the short session I decided to go for Pike. Ryton can be a tough nut to crack and my two previous efforts to catch one of its big Pike have failed miserably. This session was to end in the same fate. I worked hard and alernated deadbaits between 2 rods, working my way around a large amount of water over 3 pegs. I didn't have a sniff of a fish.

Barry the bailiff popped by and took delight in showing me various pictues of upper double figure Pike he'd taken this season. It's good to talk to someone with reliable information and just knowing that the pool does still hold fish into the low 20s is a confidence booster. He did say he'd blanked on his last 3 visits though, which again shows that the pool is not easy to crack.

Looking at the week ahead it looks like we're heading into a slightly drier period for once. As I write this, the river is already starting to fine down (about 1ft up on the stretch I normally fish) and it should be bang on at some point in the next few days. Hopefully it will be in decent nick for next weekend, as time is now running out for the rivers.

I can't recall such a lengthy spell of dire fishing conditions for quite some time. Looking back at my posts, I've only managed 4 sessions on the river since the end of October. I managed more than that in January alone last year!