Since my last post I've managed 6 sessions. Being honest, I've turned up for 6 sessions and the fish have largely had a ball at my expense. At a time of the year when I was expecting a bit of a bonanza, it's been the total opposite.

The first session on an untapped stillwater threw up plenty of fish though, but to no great size. It was a pleasant session though and the Crucians decided to show up. The half a dozen I caught were of a similar stamp, but I only weighed the first one, which went exactly 1lb. Aside from that I had plenty of Perch to a shade over 1lb, along with some Rudd and Roach. This was about as good as it got all week! 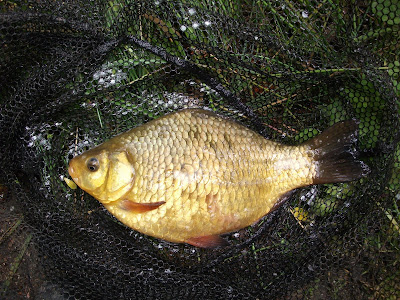 The second session on a Hinckley stillwater threw up a fair number of small fish, but nothing over 6oz. It's a water that probably needs a bolder approach than I gave it, but as a first session it's given me a better idea of what to expect next time.

The third effort saw me back on the Avon at Alveston for a short session. I had a real shocker this time on a peg I am confident with. The problem is that I hadn't tackled it in the summer before and the bottom weed was worse than I'd imagined. Memories of early season sessions from last season on other pegs, sprung to mind. The whole stretch seems to suffer badly with weed and I need to do some more groundwork. I had a few Perch up to 12oz when I changed to a trotting approach, but it wasn't a wasted day, as I spent a fair bit of time bank clearing to open up some pegs on the faster water upstream.

Part four saw me back on the same stretch of river the following day in the faster water. I had a pleasant couple of hours trotting a stick float and catching mainly Dace, with a few Roach, Perch and Chublets thrown in. When the bites dried up I switched to the lead and found weed again! I concocted a rig to get the bait above the weed and winkled some more bits out. Eventually it became hard work, so for the last hour I nipped back to peg 5 where I'd had a Carp the previous week. I'd dropped a bit of feed in earlier in the day and was hoping something big might show up. I was wrong of course, but I had a fun hour catching more Dace, Perch, Roach and Chublets on the float.

Next up was the one I'd been waiting for - the River Wye. It turned out to be a total disaster for me as I blanked. I did briefly make contact with a fish, but the hook pulled. I have no idea what went wrong on the day and it wasn't down to a lack of effort, planning or mobility. I can't really blame the conditions either - the river was rising, but not exactly at an alarming rate. Having achieved the magic ton on this river (different stretch) last year with similar tactics, I left very puzzled.

Still, it was a lovely place to be and blanking is a lot less painful in such inspiring surroundings. I was with Brian for this trip and he wasn't having much luck either. 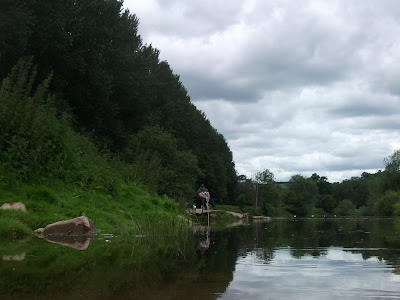 The final move of the day just before the heavens opened, proved to be the crucial one, as it resulted in Brian connecting with a fish. 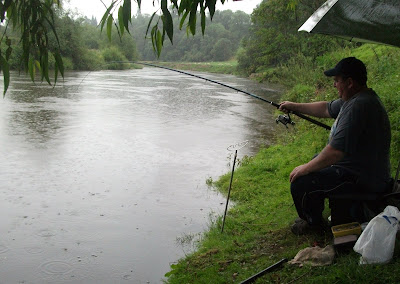 After a fair old scrap, he won the day and banked himself a personal best Barbel of 7lb 3oz. Well done that man! 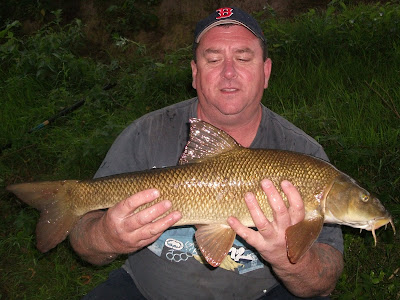 Then it was back to the camp site to spend what was left of the evening trying to cook food and have a beer under a couple of fishing umbrellas, while it totally pissed it down with rain. The joys of angling!

The less said about the next day the better. Double blank for both us on the River Lugg. Again, I was left scratching my head, as the river looked good and I was totally confident with the swims I tried.

I now have a few days to contemplate my failings before tackling the Avon again.
Posted by Sean at 12:41 1 comment:

I've been a bit quiet with my fishing recently, but I've been busy behind the scenes making plans and giving my tackle a much needed tidy up. However, June 16th saw me kick off a hectic 10 day spell which sees me spending more days on the bank than off it.

I only had a short morning session to play with and it also had to be worked around a 7-45am drop off at Coventry station. Still, 3-4 hours of fishing time was worth the effort and I knew the Alveston Club section (which I've rejoined again), would be fairly quiet.

The pegs in the area I usally head for were occupied, but I had the choice of pegs 1-7, so I settled on peg 5 which is feature packed peg I've managed to overlook in the past. There's a fair depth close in, with plenty of lily pads and an overhanging bush. There's no flow on the inside, but it moves at a steady pace down the middle and there's the bonus of a far bank tree along with more lily pads. 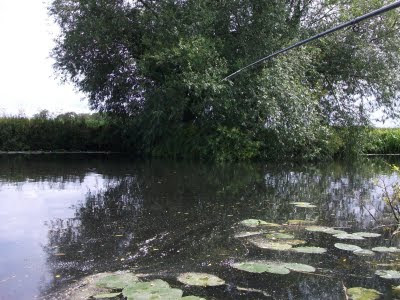 I caught a few small fish quickly on the inside using a home made stickfloat and centre pin set up. Bites dried up quickly though and I needed a rethink. I fed in some groundbait on 2 lines and set up a straight lead rig. After a barren half hour mid river on the lead, I noticed that the inside line I'd baited up beyond the pads, was bubbling away like a witches cauldron. I switched the lead to the inside line, but nothing seemed interested.

I decided to change the presentation and within a minute I'd hooked something that felt quite decent and bolted off into mid river. I was cursing at this point, as the straight lead rod I had just discarded had a slightly beefier set up. Instead I was now left to play a hard fighting fish on a lightish hooklength in a snaggy swim with a size 17 hook. The fish was a strong favourite to win this battle.

With a dose of luck, a bit of skill (?!) and a lot of patience, I won the battle and netted one of the resident Carp - a Common of 6lb 6oz. A rather ordinary fish in Carp terms, but only my second ever from a river, so I was more than happy with it. 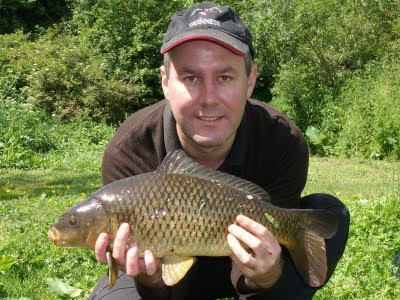 I had a few Perch up to about 12oz to round off a short but pleasant morning.
Posted by Sean at 08:06 1 comment: