A strange month comes to an end. The weather has been quite diverse at times. Hot, cold, windy, but not really much rain to shout about in the Midlands.

It's the lack of rain that has rather dented my enthusiasm. I've been hoping to catch the river in prime condition for a shot at a double figure barbel,  but it remains on the back burner.

Since my last post I had a short (2 hour) after work dabble on a new stretch of the Upper Avon. Great to see it, but with weed still relatively thick, it's a tough cookie at this stage of the year. Best left a while longer, although one particular peg really grabbed my attention. A return is planned for mid November if conditions are OK. 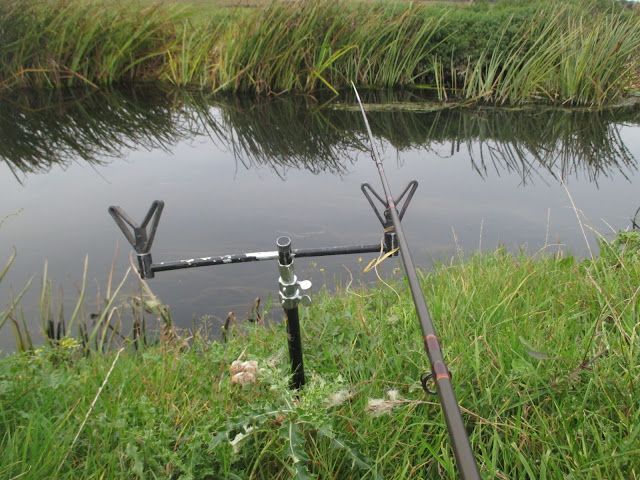 A lazy Sunday afternoon trip to the Anker didn't throw up a great deal from the gin clear water. Just the odd silver fish to the stick float rig. Pike didn't want to play - or more to the point, they didn't play fair! 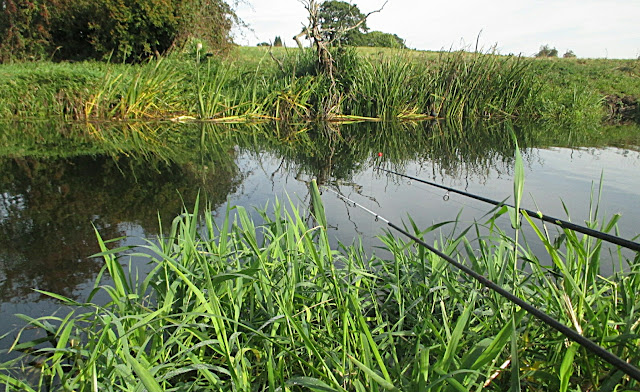 I'd had a deadbait out all session. Not a sniff. On packing up I jettisoned the bait with a sharp tug, leaving it clearly in view on the bottom just beyond the margin.

I packed the gear in the car which was just behind me. A quick check before moving off to make sure nothing was left behind. Yep, all good - even the deadbait left beyond the margin was no longer littering the river bed. Hang on?! I've been done over while my back was turned, 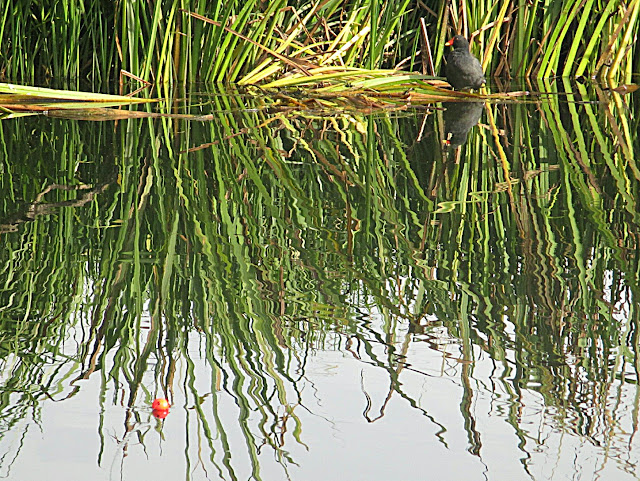 Pike rod back out with net and another smelt was dropped out. Two minutes later a pike goes nose to nose with the bait, staring it out for 2-3 minutes. It then flipped the bait on its side and chomped down on it. I struck, but all too early. I knew that we'd likely be parting company and after a brief tussle, the hooks were ejected. Not a huge fish thankfully, but it would have saved my day.

A week later I didn't even get out at all. A rare soggy day that coincided with my only window of opportunity, did nothing to inspire confidence. With alcohol excess also being a factor, a simple decision to stay at base camp was taken.

Next up was a rare foray out to the far flung pastures of the middle Avon. Lots of legwork required, but I had high expectations for this venture. It didn't transpire into a real rod bending session though. Just the one bend as it happened, but boy was it a belting battle.

Spotting an opportunistic pike mullering small fish on a regular basis in the oxygenated water, I trotted a smelt fairly shallow. I just allowed it to drift around the natural eddy. It didn't take long to get snaffled and all hell broke loose.

After several runs and some careful avoidance of near bank snags, I eventually guided it into the net. A decent double at 13lb 5oz, which eclipses anything I caught all last season. Better to come in the season ahead I hope, but I'll take that for starters. 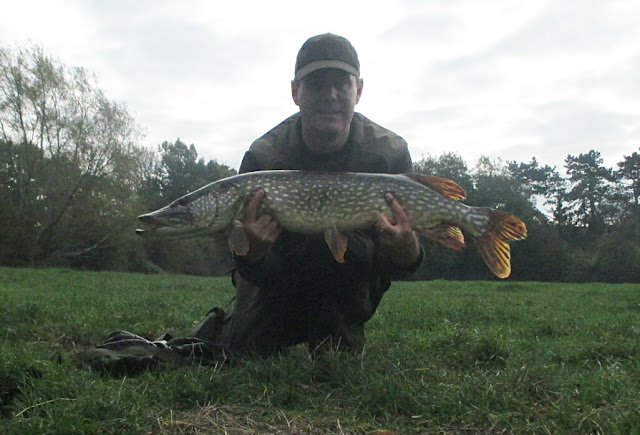 The big hope for the month was still to come in the shape of the River Test. The main mission was simple - get the grayling monkey off my back. Big pike, roach or chub were also on the short list. 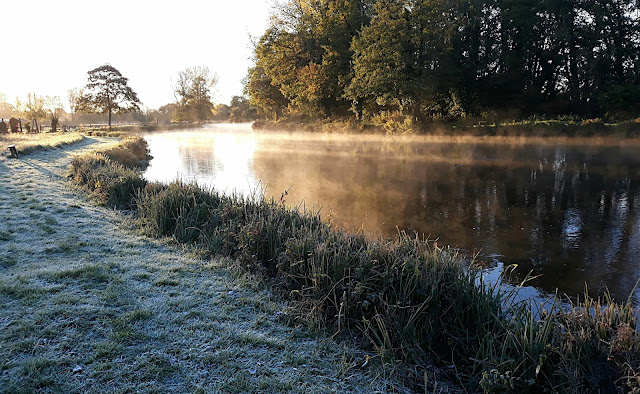 I love these indulgent days out. A day ticket costing more than some of my season tickets, sounds obscene. However, we just don't have this type of river within easy reach of me, so sometimes you have to treat yourself. I work hard enough all week after all!

The weather wasn't kind to us though. No recent rain, coupled with a big drop in temperature on the eve of our visit. Throw in a biting northerly wind, a sharp overnight frost and a multitude of  excuses were on standby. 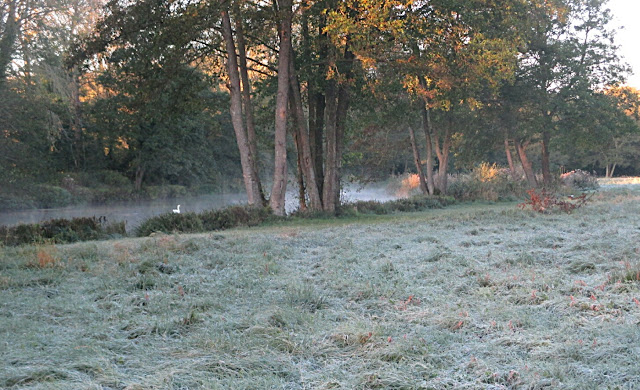 I began trotting maggots just below where a carrier joined the main river. An early bite saw a bumped fish, but then nothing after several more runs down. Did I spook them perhaps? I moved above the carrier for a longer trot. Still nothing doing.

Plan B saw me ignoring the biting downstream wind on the main river, in favour of the more sheltered carrier. I arrived at the top of the beat just as Charlie had worked his way around from the main river. I left him to tackle the first pool while I plundered a small run towards a bend.

A couple of casts and the float dipped. A small fish, but unmistakably the lady of the stream. My first ever grayling was in the bag - all of 4oz maybe. Who cared though? I didn't! 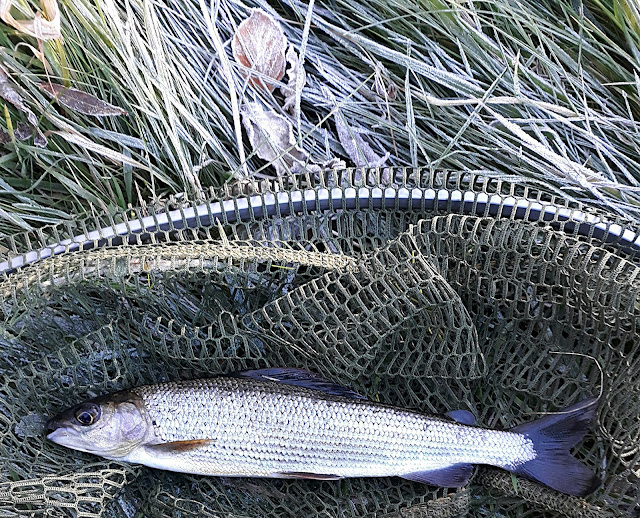 Job done and anything else was now a bonus. I almost banked a second - even smaller - one, but some comical handling of my 15ft rod saw me grappling with overhanging tree and fish in tandem. The fish slipped away while I retrieved my rig with my net. And then the swim died.

Despite plenty of endeavour it wasn't proving easy. Charlie managed a grayling and lost a better one. He was also picking off the odd small trout. Brian was battling with his centrepin, trying to get to grips with non-fixed spool angling. A tough ask in the conditions and he abandoned it as a bad job.

For the post lunch session I wanted to head for deeper water. Unfortunately my preferred area was spoken for, so we settled down elsewhere, bedded in and chucked our feeders out. Trotting was banished. A suicidal trout gave me the runaround, but nothing else showed for any of us. 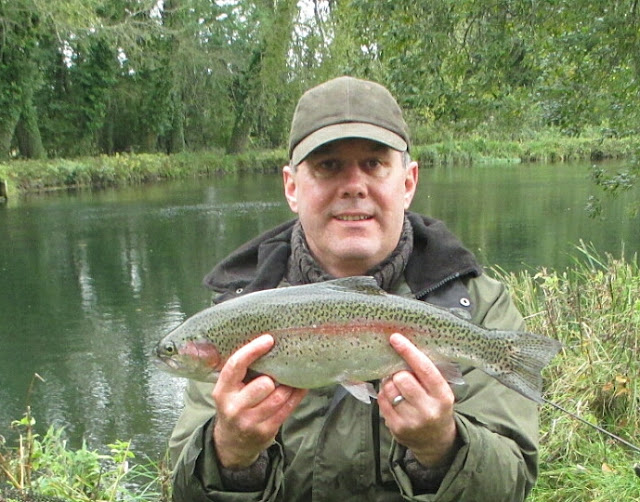 Eventually all of the downstream rods moved back above us, and, with nothing to lose but a nagging wind, I headed off alone to seek shelter and renewed hope for the last couple of hours.

An hour in and I'd had nothing. Deadbait motionless, maggots untouched. I'd been feeding liquidised bread through a feeder, so I switched to flake hookbait for one last fling. Straight away I had a bite which I duly missed. Straight back out and the tip banged around almost instantly. No mistake this time, although not quite the chub I'd hoped it might be, but a 4lb 1oz pb trout. 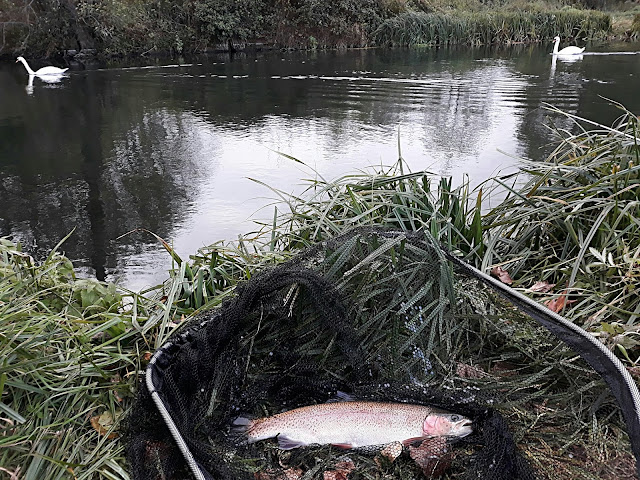 Next cast, rod barely put down and the tip was pulling around again...

And so it continued with another 3 trout in a short mad spell. I lost one too as it jumped around 2ft clear of the water, ejected the hook and the feeder narrowly missed my left ear! The last fish fell to a deadbait rather than bread. 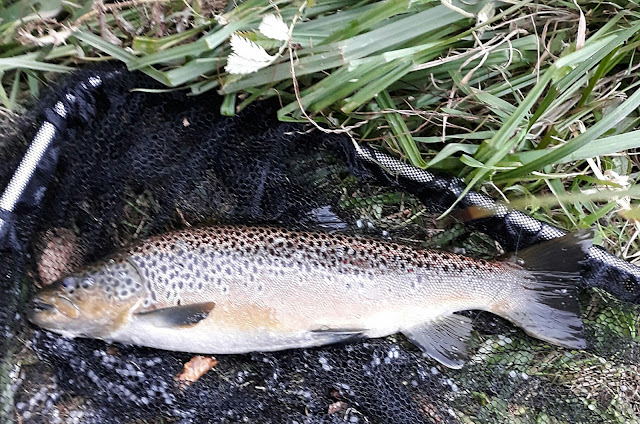 Not quite the coarse fish bounty I'd hoped for, but as a one off it made for a fun experience in tricky conditions.

Closer to home I had a week off work to catch up on home improvements. A short fishing window opened up on Halloween afternoon, so I headed off to the Anker for predators. I changed my mind on the way though and ended up on a small pit instead!

It's a backup water I don't fish very much, as it lacks tranquility due to its location. It's a nice water though with pike to low twenties and zander nudging double figures. It would be quiet midweek. 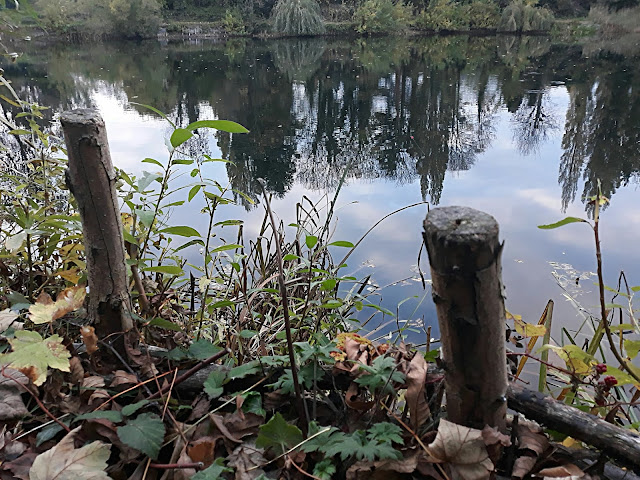 With only 2 hours to spare I hopped between a couple of pegs using smelt deadbait. Initially I started with a heavier weight in the deep water, but I eventually scaled back to a single SSG shot to give a slower drop. That change triggered an instant reaction and my only fish of the session. 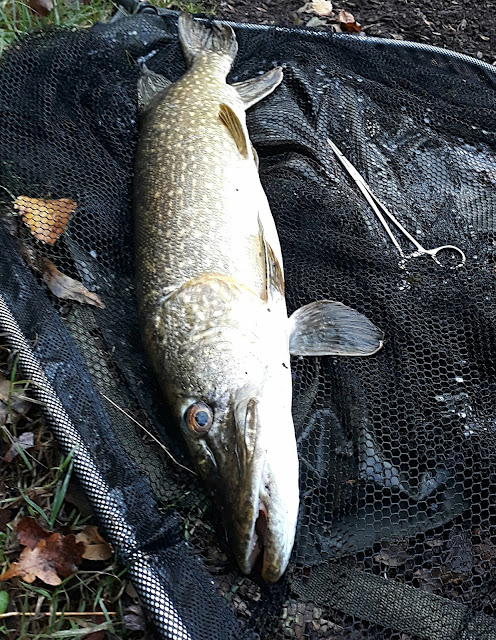 A nice clean jack of maybe 6lb that gave the dullest fight ever! My first predator from the venue though.

I have no idea what's next. Family matters are dominating things at the moment, but I'll be looking out for any chance to wet a line as soon as possible.
Posted by Sean at 16:41 2 comments:

The Big Blank Off

Two men with a passion for rivers. A day's work under their belts, they'd join forces for a couple of hours in pursuit of predators. Who would earn the bragging rights?


A painfully clear Avon was the venue. However, with a good depth and dipping light levels, a degree of optimism was daring to surface in both camps.

In the red corner, Mick had the run of the pegs down to the weir. In the blue corner, I took the pegs towards the upstream limit. Our paths never crossed, but updates were shared throughout. 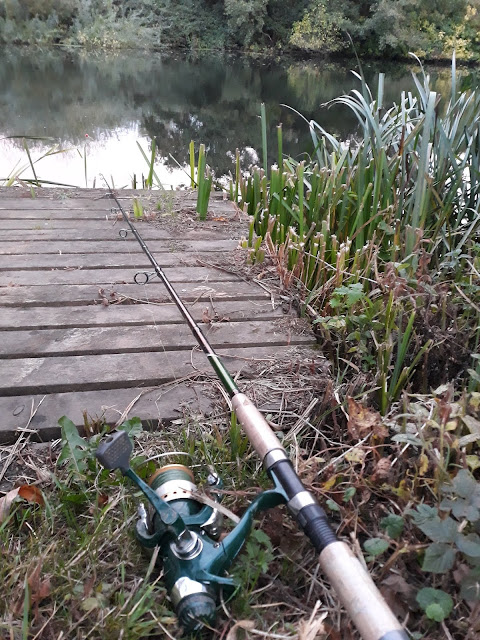 It wasn't exactly a thriller down the river. A single chomped smelt dropped take for Mick. I'm claiming a single tentative enquiry that saw two solid short dips on the float about 30 seconds apart. That was it! A no score draw.

Still, it was a nice enough evening for early October and much better than staying on at work. Even I'd take blanking over working any day!

Later in the evening I acquired some of my late father's old fishing tackle. My brother was having a clear out and offered it to me rather than just dumping it. 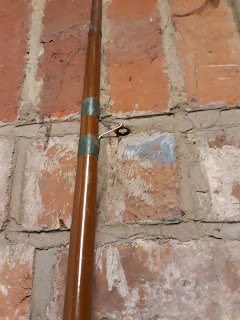 My dad didn't have much gear and what he did have was rarely of any great quality.  Part of a large Irish family, brought up in the 1930s / 40s, he had a strong make do and mend attitude.

He never bought a rod in all the years I fished with him. He only had one and it hadn't seen the light of day for maybe 20 years. In his latter years I'd always encouraged him to use my gear - largely to stop him carrying his own, due to his health issues.

Taking his old rod from a damp and musty rod bag, I expected it to be rotten. Not so though. The blank itself remains in good nick. Some eyes have been knocked about and the cork handle is a little warped.

It's not a rare or valuable high end blank, but the joints all slot together perfectly.  It feels reasonable enough and theres no structural damage.

The tip section looks like it's suspiciously short of a few inches though - evidence of the mend mentality no doubt. The handle is too long for my liking, but that's soon remedied (and would conveniently eradicate the warped area).

All things considered, it would probably still give some reasonable service as a heavy float rod for species like tench or larger bream.

And so a plan is born. I've been looking at more and more retro / vintage tackle on Ebay recently and quite fancied a restoration project for later in the year when the dark evenings hit. This has dropped into place nicely, so I'm going to strip it back and attempt a full makeover.

Hopefully I'll be putting it back into service sometime next year. It wouldn't feel right just consigning it to the local landfill site. That would surely amount to betrayal.
Posted by Sean at 13:45 No comments: