﻿
I didn't post anything last week as there wasn't much to to say. It was a strange old day which started with me clearing a layer of ice off the car just before 7am. By the time I'd reached the A46 barely 15 minutes later it was raining!

The rain eased off but started again just as I was parking up. Thankfully it passed over for just long enough to allow me to walk down to the river and get tackled up. I hate getting soaked before a session starts, but once set up it doesn't bother me - which is a good job because it then chucked it down for a good 2 hours solid.

The river was also pushing through with over a foot of extra water on. I hedged my bets with a straight lead rig and Pike rig. It turned into a gruelling session with no Pike and only a few Roach and Dace to save me from a total blank. I didn't stick it out too long. Sometimes you know when you're beaten and this was a sound thrashing!

On to this week and I'd been anxiously watching the river levels all week. At one point the gauge I use as my reference point was showing about 2.5ft of extra water on. I started to think of other options, but luckily things settled down and by Saturday morning it was just 6 inches up and looking bang on.

Fish were topping throughout the whole section and I started out on the wide section which I've neglected for quite a while. I hedged my bets again between a feeder rod and a Pike rig. As it turned out this was a bit of a mistake. I defintely suffered from trying to do too much on the day and I would have benefitted from concentrating on just one type of fishing.

I had a few Roach on the feeder set up but then hit a patch of missed bited which got me frustrated. Amongst that I landed a small Pike on a Smelt deadbait. 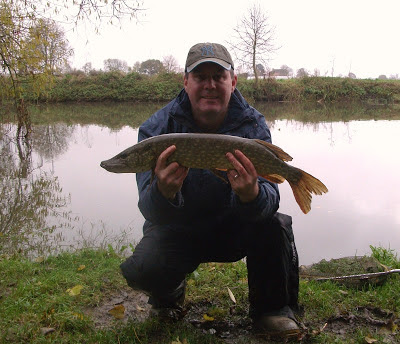 I eventually upped sticks and moved back down to the lower section for the last couple of hours. I spent more time on the Pike fishing after the move and had 3 further runs which resulted in 2 more small Pike on the bank - one on Smelt and the other on Lamprey section. 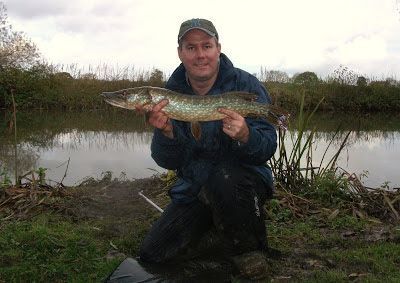 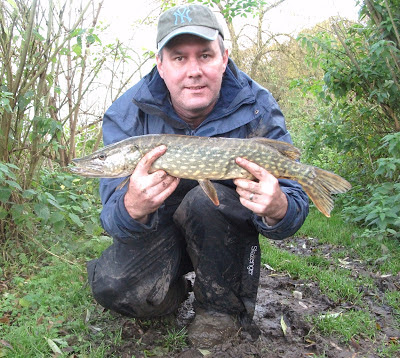 It's nice to be amongst the Pike again and hopefully one of the big girls is going to put in an appearance soon...
Posted by Sean at 13:18 1 comment: