My final session of the season was on the Avon with Brian. Initially we had toyed with the idea of a pool, as I'd checked out the river levels before leaving and it was obvious the river would be up a foot or so. However, with stillwaters still struggling to thaw themselves out fully, it had to be a river or nowt.

Alveston was a fairly easy choice for me. There's a long peg (9), that always has a bit of a back eddy, is fairly deep and it's more than big enough for two. Although the river was tanking through a bit, it was still easy to hold bottom with normal leads / feeders in the slacker water on the inside of the main flow.

Things had definitely changed in the week since my last visit. Previously it was almost 10 degrees cooler and crisp and white all round: 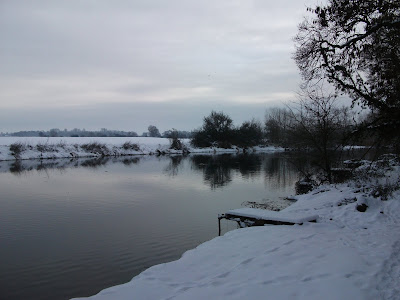 This time things were much greyer and the river about a foot higher and with plenty more colour. Landing stages were partially submerged along the whole stretch and the water was lapping over the top of the bank in places. 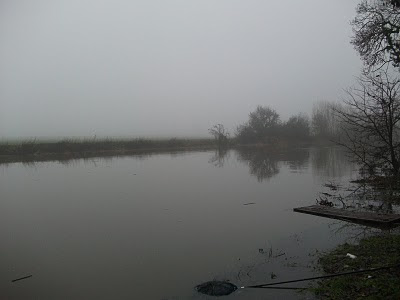 It became obvious fairly quickly that it was going to be a grueller. We both set up two feeder rods and just decided to sit it out for a few hours. Debris was constantly fouling our lines and optimism was waining.

I pulled in a line that had become fouled, only to find a Gudgeon attached to the hook - along with a pile of debris. Lucky for me, that was my first Gudgeon of the year in Brian's presence, so it stuck another point on the challenge for me!

I then made a switch on the other rod and went for bread flake to complement the liquidised bread I'd been feeding. It eventually paid off when I had a proper bite and I assumed I was into a Chub. I was wrong though and the culprit turned out to be a welcome Bream of 4lb 3oz. 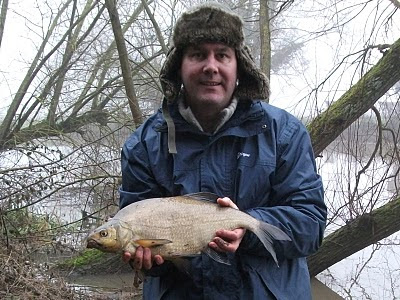 Within 10 minutes I had a take on my maggot rig and this time I was even more convinced I was into a Chub. It was a very dogged fight, but yet again I was wrong and it was a another Bream - this time a much smaller sample of 2lb 9oz. 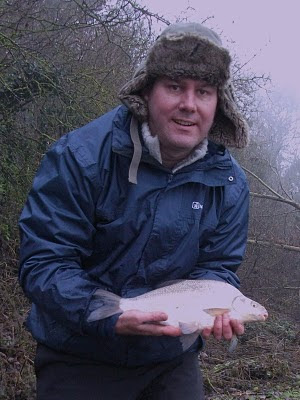 Nothing else put in an appearance and we called it a day at lunchtime. I was more than happy with a couple of fish to be honest, as I thought a blank was a more likely outcome. The river was clearly dropping during the few hours we were there, so hopefully it will soon be back to a more settled and appetising state.
Posted by Sean at 06:02 No comments:

...Those were the words that were hurled in my direction by one of the locals, as I made my way back to the car. Given that it was -2C when I arrived and had only risen to 0C on leaving, coupled with the fact that I was fishless, I could kind of see their point!

The plan for the day was actually totally different. I'd got a free day and with the weather looking nice and settled (if cold), I fancied using up some old maggots and bread on the river. I'd decided on the Lido as it would be easy to access in the conditions and I quite fancied chucking a couple of feeders out from the sank bank area.

Well it all went belly up at 6-30am when I discovered one of our cats had pebble dashed the front room carpet again. The poor little fella had a case of the runs last week, but seemed to be over it. Not wanting a sick cat over Christmas, I had to cancel my plans and take a trip to Nuneaton, to be relieved of a few quid.

By 9-40am we were back home with a sulking ginger tom, albeit he had the last laugh by leaving a deposit in his box for us! Could have been worse - he could have left it in my slippers!

Anyway, it was too early in the day to write it off, so I decided I'd have a couple of hours of Piking. So it was into the freezer for a supply of Morrisons sprats (a bargain at about 75p for two dozen) and off to the river. I decided on the Alveston stretch rather than Lido.

As I mentioned earlier, I didn't bank any fish, but I did hook a Jack. It was on for a few seconds, but slipped off the hook as I bent down to pick up the net. I didn't get any further knocks, but it was just a bonus to be on the bank again. I wasn't the only one fishing - I saw what was either a Mink or an Otter working the far bank late in the session, while the usual Kingfisher put in an appearance too.
Merry Christmas and tight lines to anyone out fishing over the festive period. I'm hoping to get out again myself at least once more before the new year, so maybe there's at least one more fish to be had in this year yet! 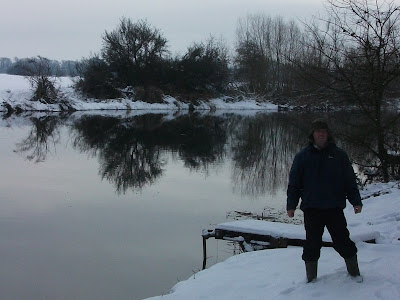 It was very pleasant to wet a line again in somewhat better conditions than we have seen of late. I did manage to get out briefly since my last post, for a couple of hours Piking on the Avon at Wasperton with Brian. For completeness I'll keep the report simple - we double blanked in royal fashion!

Back to this week's activities and we decided to fish a new part of the stretch. During the summer months the stretch nearest to the Wellesbourne to Stratford road has been off limits due to the uncertainty of the parking. It's a bit precarious trying to park on overgrown grass verges and you were never really certain what lay within them and what damage you might inflict of your vehicle.

Cold weather knocking back the growth, coupled with a bit routine maintenance and suddenly parking spots now opened up before our eyes. The plan is to make the effort next year to take my strimmer down pre-season. It will be time well spent because the walk to the river is just 30 yards, rather than the usual 300 yards.

Although it's only a few hundred yards upstream of the village section, it was nice to tackle a new stretch. It's a short section of maybe 15 pegs with a right angle bend right in the middle of it. Most pegs seemed to have one obvious feature on either the near or far bank and we settled on pegs 4 and 5. 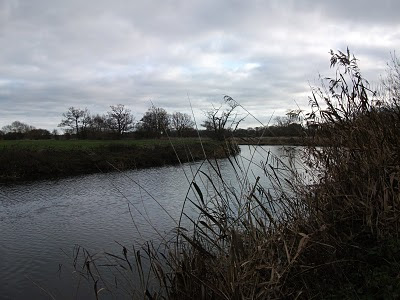 I set up a couple of feeder rods with the intention of using one for bread and the other for maggots, aiming towards a far bank overhanging tree. I also had a stick float set up, to trundle it down the river with a centre pin - something I hadn't done for a while. 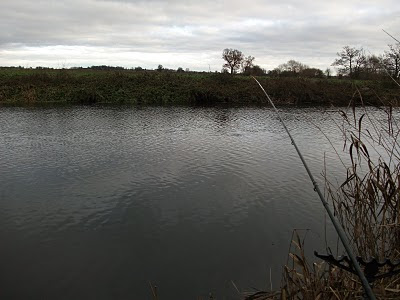 The float line produced just a single Dace, but the feeder rods were getting plenty of attention, albeit the bites were very shy. I had two rods on the go, but with the bites being very tricky to hit, I had to scale back to one rod so I could give it my full concentration.

I lost count of the number of missed bites on both bread and maggots and I couldn't crack it no matter what combination I tried. I managed to winkle out a dozen fish during the session - half of them Dace and the other half Roach. They were of no great size - perhaps 5oz being the best fish, which was a Roach that took a piece of bread flake.

Brian wasn't exactly pulling up trees and he had leapfrogged me, having moved from peg 5 to peg 3. He'd had the odd Dace and Roach, but then struck into something better just as he was about to join the land of nod! Wide awake now, he carefully played the fish in without any fuss and it was a nice Chub of 3lb 1oz. He'd recently acquired some new scales courtesy of his birthday, so they have now been christened! 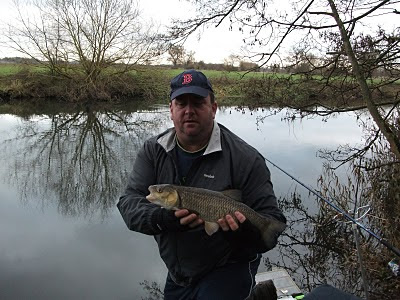 I have to give full honours on the day to Brian - most species, most overall weight and the biggest fish. I don't tend to lose out on all three counts that often on a river, so although today was a long way from a royal blank, it was still an early Christmas stuffing for me!
That said, I totally enjoyed the day and the challenge of trying to get to grips with a new stretch. I'm looking forward to fishing more of it over the next 3 months - weather permitting! The upstream end peg looks like a classic Chub swim, while the slacker water on the inside of the big bend looks nailed on for some Bream. Hopefully I'll prove myself to be right at some point fairly soon!
Posted by Sean at 08:26 No comments: