Back to College Pool, or should that be back to school?! It was a tough day (especially the first half) and the Bream mission I'd started the previous week remains a case of unfinished business. I'm not setting my sights too high for the challenge - there's a fair head of Bream in the 4-6lb class in the pool, along with the odd 7lb+ fish that we know of. One of the larger 6lb+ samples that I've had on occasions in the past would give me a solid mark to work from and I could then target bigger fish later in the year on other venues.

After 2 sessions on the pool though, I can't seem to connect with the right stamp of fish. A few hours in and I'd only had a 3lb 14oz Bream and 3 small Perch. The guy opposite had banked a solitary small Barbel before calling it a day, while on the next peg only a Roach and a decent Bream had come out.

Despite nearly calling it a day around 2ish, I stuck it out for an extra couple of hours and just kept fishing over the bait I'd balled in at the off. In the end it paid off to a small extent, as I took 3 more fish in the last 2 hours. A Bream of 3lb 15oz was first on to the bank, followed by an all too rare (for this pool) Chub of 2lb 9oz. 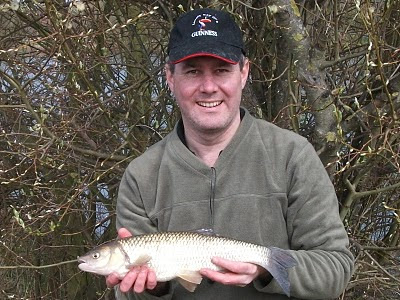 I can recall many years ago when I first fished the pool, it was full of Chub. Very few seem to show up now though, so this immaculate looking fish was a welcome change. I didn't expect to be increasing my Chub challenge score today, but this fish chucked an extra 3oz (or a massive 2pts!) on to my score. The final fish of the day also added 2 more points to my score. It was the species I'd set out to catch, but at 4lb 12oz, it was still quite a way short of my target for Bream. 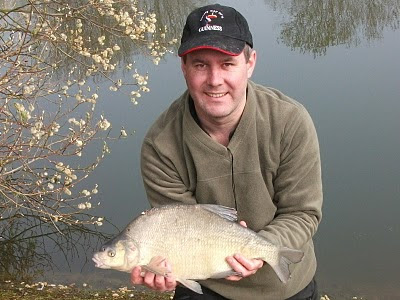 Sadly I had to call it a day at that time, as I had other duties to attend to. I get the impression that I was probably leaving when prospects were on the upturn and I'd have liked at least another couple of hours. Keith J had turned up was fishing the far bank, so I'll be interested to see how he got on.

Next time I think I'll dig out the pellets to see if that sorts out the better fish. I seem to be in the habit of adding to my challenge score each week now, but at this rate it's going to take me until 2013 to get competitive! I don't have that long! In all honesty, I'm just happy to keep extending my number of sessions since a blank.
Brian is back in action next week so that could scupper any progress! He's dared to suggest the Ryton word - or the Murder Pool as he calls it. He's on a run of 4 consecutive royal blanks there now. I've suffered my share there too and I'm not sure if now is the time to tackle the fickle one.
Posted by Sean at 10:18 2 comments:

Spring in the air

I didn't get around to doing a report from last week's end of season river venture, so I'll start with a brief catch up. Despite the temperatures being a lot healthier, the river fished poorly. We were on the section that we're less familiar with, due to a match on the other section. I ended up moving pegs after a couple of biteless hours - a move that brought better fortunes but hardly spectacular.

I managed just 4 fish - all different: Dace, Roach, Chub and something that looked a bit hybridised to me. I thought I'd got a decent Chub, as the fight was fairly spirited, but when I saw a brief flash in the water, I began to wonder if it was a monster Roach. When I netted it, the Roach theory was quickly put to bed (not a red fin in sight), but it looked to me like a Roach/Bream hybrid. I didn't weigh it but it was in the region of 2.5lbs. 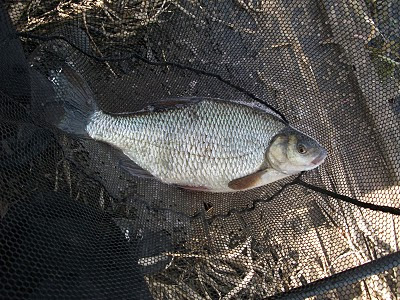 On to this week and the weather forecast promised us a stunning Saturday and it didn't disappoint. That said, I had to clear ice off the car before leaving and I was hoping the chilly overnight temperature wouldn't kill the prospects.

I had been mulling over the Leamington AA opportunities open to me and in the end I settled for College Pool in search of Bream. I'd had a good day for them in March last year, so I figured on a repeat. I bumped into a chap called Paul who I quite often see throughout the season. He was just setting up and reported that fishing on the pool had been slow so far this year with just the occasional better fish showing. I settled in on the next peg. 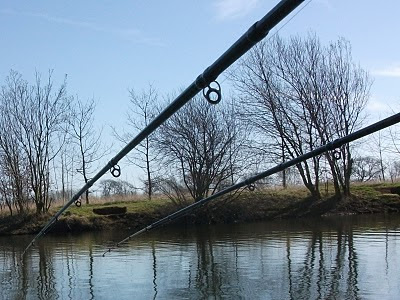 I balled in a few balls of groundbait into the usual 15+ foot of water and fished over it with a straight lead on both rods - one baited with red maggots and the other with bread. It was a slow start, but I'd heard a few small fish being banked on the next peg so I was optimistic.

I picked up a Roach of 5oz to get me off the mark and boost my challenge score by an extra 1oz! I feel like a prize idiot weighing fish like this! 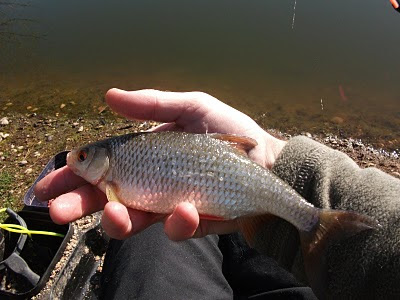 The next fish gave me a strange dull fight. I thought it had to be a Bream and not a terribly big one, but when it surfaced my jaw dropped. It was a big old Perch and a country mile over my pb. It just rolled nicely into the net and meant that I had joined in with the bloggers Perch party! It weighed in at 2lb 12oz, which stuck nearly a pound on my previous best. 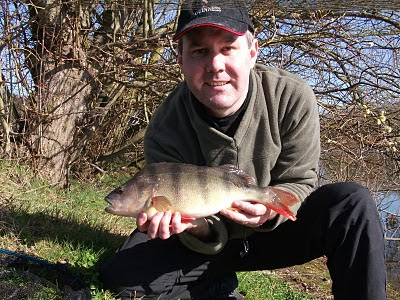 I picked up a few more bits during the day before connecting with a couple of Mirror Carp - both on maggots and both led me a merry dance on lightish gear. Sod's law, the bread rig sat close by was more geared up for the Carp but they didn't want any of that!

Anyway I won both battles and twice increased the weight of my best Carp from this pool - also increasing my challenge score too. It's good to see the Carp in the pool are packing on the weight now 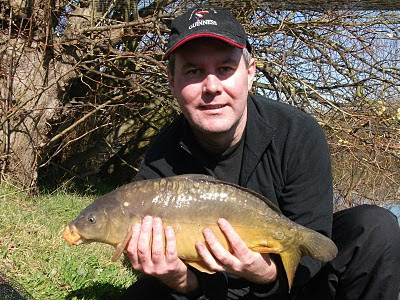 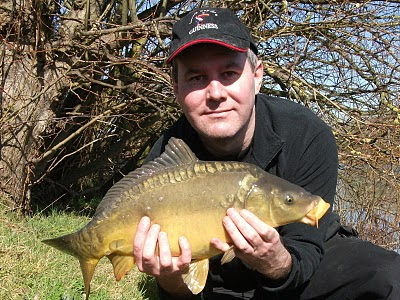 Paul on the next peg had started to get amongst some nice Bream (my intended quarry!) and had banked 6 of them. I was intent on catching at least one and I even extended my stay to try and prove a point. My patience was eventually rewarded, but the result wasn't what I'd hoped for. A Bream graced my net, but at 3lb 8oz it was a plenty short of the required target and didn't increase my challenge score. 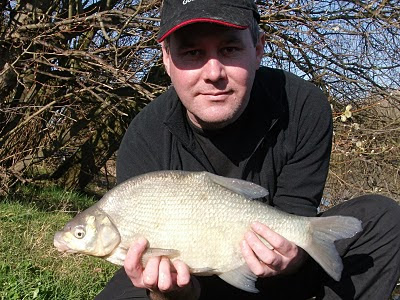 In total I had around 22lb of fish, which was very welcome after the indifference I've suffered on the river this year. I'm starting to subscribe to a theory now though. I've had 2 decent sessions so far this year and what's the common theme? - both times Brian wasn't with me! I always knew he was jinxed!
Posted by Sean at 10:39 3 comments:

With just a week of the river season to go, we returned to the Avon in the hope of a points scoring bonanza. Having had a near 2 week lay off I was itching to give it a real good effort - so much so that I indulged in a little pre-baiting the afternoon before. It was a nice idea, but we failed to reap any obvious rewards from it.

I wasn't overly chuffed with the 0C temperature reading when I got in the car. I've come to learn that whatever it's reading when I leave home, it always seems to be 2C colder on the stretch I was heading for.

I winkled out a couple of small Roach early doors on maggot, while the other rig (on which I alternated bread and worm) remained pretty motionless. With bites drying up, I started to set up a float rod when I saw the maggot rod arch right over and then spring violently back. I grabbed it and it felt like a small fish was on initially, but it then seemed to wake up.

I confidently expected to be attached to a points boosting Chub, but after a brief battle on lightish tackle the fish surfaced and into the net popped a small Pike of 3lb or so. Not what I wanted, but it seemed to set the tone for the rest of the day. 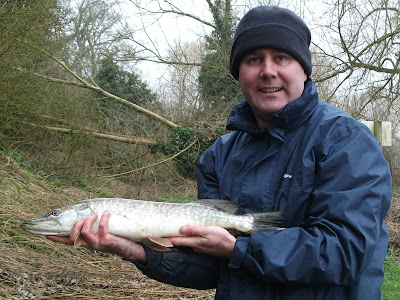 Brian wasn't fairing any better, although he amassed a mammoth 5pts for a 1oz Dace! He'd been after Pike already and I now decided to join him. It wasn't too long before his Lamprey section was on the march and although Brian allowed the take to develop, the single hook rig he's been trying out didn't connect. A few minutes later and exactly the same thing happened again. We got a good glimpse of this fish though before it made off and it looked a definite double.

I was next into the action when my line started to tighten up and the rod tip began to arch over. I connected with this one and thankfully the hooks (I was on trebles) held firm. Although only a small Pike, it stuck a few extra points on my tally at 6lb 8oz. 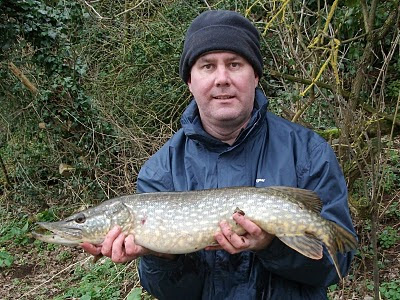 Brian's turn next and this time the single hook connected and held firm - and it needed to! The fish led him a merry dance and went under a landing stage and did a 360 around the support. I think we both figured this was going to end with the fish winning again, but I managed to net the Pike and Brian was able to slacken off the line so we could get it banked. As always, Brian seems to go a bit better than me on the Pike scores and this one went 8lb 5oz. 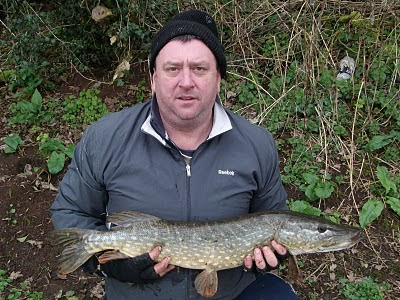 Not the day we'd hoped for, but pleasant enough nonetheless - it certainly beats watching Coventry City trying to play football by a long way!