I'd set my stall out this week for a Saturday session on the river for Pike. I'd been hopeful that the snow would hang around just long enough to avoid the dreaded snow melt entering the river. Right up to Friday evening the river level was perfect, but then the heavens opened and the first stage of the big melt was underway.

I woke up on Saturday morning and loaded up the EA river level site. The Avon had risen 8 inches overnight on my intended stretch and the cold stuff was clearly piling in. I said my goodbyes to my wife, informing her that the river was buggered and that I'd be home by lunch! Nothing like confidence is there?!

The weather was quite glorious actually and it presented a nice sun rise. 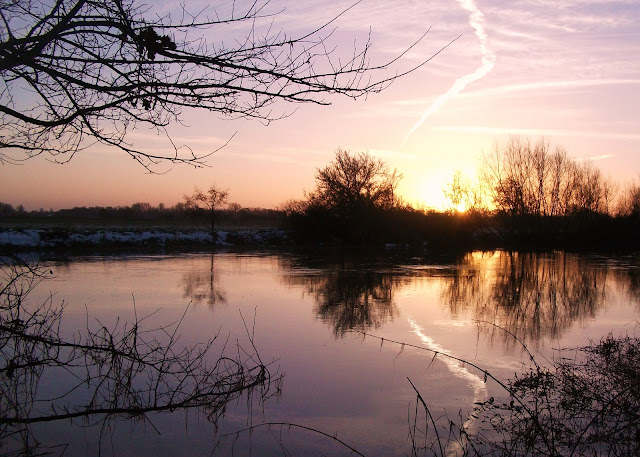 The fishing was as dire as I expected it to be. I fished 2 rods in the slackest area I could find, alternating Lamprey, Sardine, Smelt and Roach deadbaits. I never had a sniff.

The river rose a further 6 inches during the short time I was there and by 11am it was obvious that conditions were only going to get much worse. The predicted blank, the first I can recall for a long time, had come to fruition

One positive I can take from the session was that my new winter attire acquired at Christmas performed admirably once again. I was as warm as toast throughout.

As I write this, the river is now over 5ft above normal and still on the rise. With heavy rain forecast for the early part of the week and potentially more rain towards the back end of the working week, the prospects for getting on the river next weekend look very bleak. At least the stillwaters will be back on limits and will be benefitting from the much milder temperatures we have on the cards this week.
Posted by Sean at 13:23 1 comment:

Back to the Avon this week for a short morning session after Pike. The river looked in decent nick and was only a few inches up, still retaining a healthy colour. I was with Brian this week and he decided to set up in peg 3, which I'd fished the week before. I slotted in next door on peg 4.
It was somewhat cooler this week with a biting wind at times, coupled with some light showers. Conditions under foot were treacherous, meaning that moving around with gear wasn't exactly desirable.
I had an early fish out of peg 4 which took a Lamprey section on the drop. I'd only just put the rod down and picked up my other rod to reposition the Smelt bait, when I saw the float careering off into mid river. It turned out to be a small jack, sporting gill damage from a previous encounter. It didn't seem to bother it though and it was lively enough.
﻿

I then decided to have half an hour on peg 9 which has produced for me in the past. No sooner had I left than Brian was into a fish that took a Sardine. Only when he'd banked it, did I realise that I hadn't brought my scales with me this week. I'd swapped my gear around to allow for a more mobile approach and didn't pack them. Fortunately it wasn't a pb shaker, but it was a solid fish and similar in size to one that Charlie caught the previous week (which went just over 9lb). 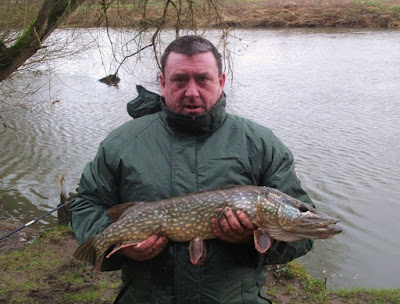 Peg 9 was a dead duck, so I eventually moved back to peg 4 for the last hour. I had one more fish on Smelt. Again, it was another jack. 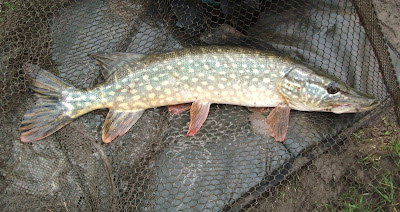 I seem to be cursed with jacks this season and it's becoming a bit of a joke now. I shouldn't moan though because catching anything is better than blanking. I'm sure my time will come and I suffered a similar pattern in January last year before landing a couple of doubles.
Posted by Sean at 09:51 1 comment:

Back on the River...At Last!

I kicked off the 2013 campaign by reacquainting myself with the Warwickshire Avon. At long last a period of dry, unseasonably warm and settled weather had taken a grip and it was clear from early in the week that running water fishing was on the cards for me again.

Having been kept off the river for nearly 2 months and knowing that the water level on this stretch had been around 7-8ft up at its recent peak, I was keen to assess the impact. I didn't have to look too far to see a big change to peg 3. 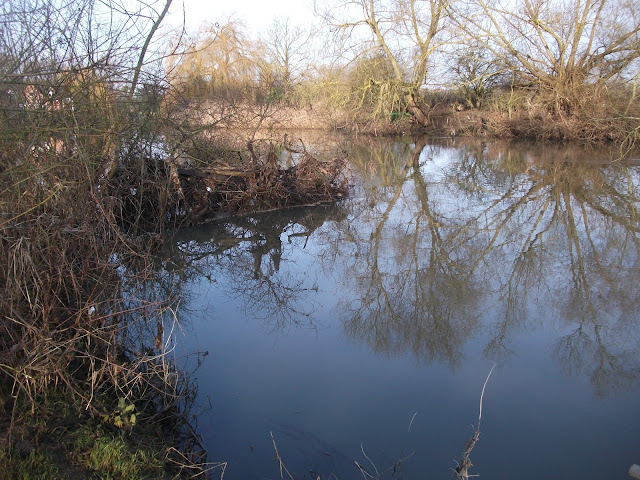 The large snag protruding out from the nearside bank used to be about 12ft nearer to the camera. It's the remnants of an overhanging willow that used to be a feature on peg 3, but has now created an even bulkier feature for peg 2.

I was joined by fellow club member Charlie on this trip and we both decided to hedge our bets by tackling up one rod for Pike and another for anything else that might be feeding. We found it tough going in the main part, but we both found a few Roach and Dace on maggot and caster. I moved on to bread flake and prawns to see if any Chub or Perch would oblige, but nothing showed up. I felt confident of finding a Bream or two in the coloured conditions, but that was totally misplaced.

I managed a couple of Pike, both taken on Smelt deadbait. The usually reliable Lamprey section got zero interest though. Both of my fish were only jacks around the 5lb mark - the story of my winter Pike campaign so far (albeit a very short and interrupted one) . 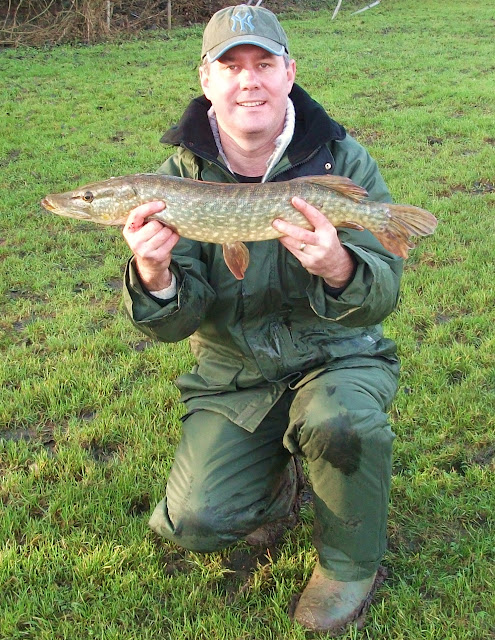 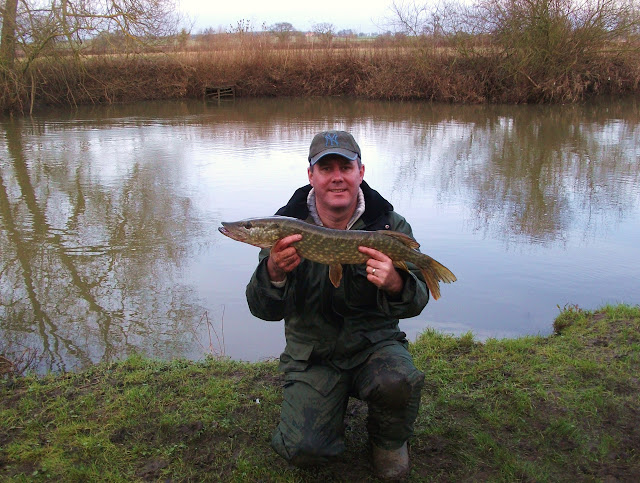 Charlie is a reluctant Piker, but he still winkled one out himself. It was quite a solid fish and the best of the day at 9lb 2oz. You can see from his handling and the almost pained expression that he's not too keen - although he is a Wolves fan, so sporting a pained expression on a Saturday afternoon is par for the course! 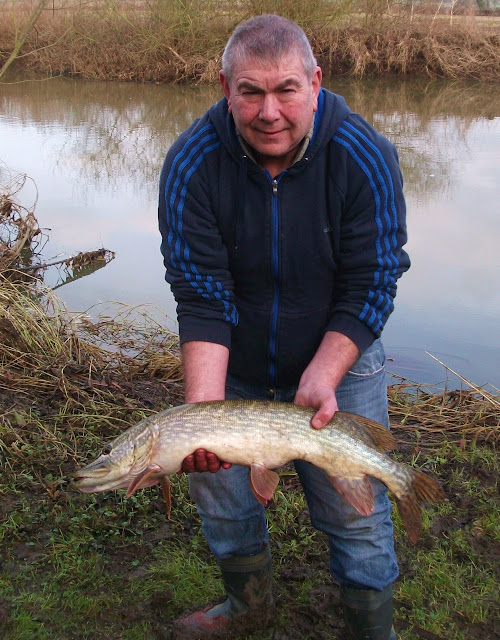 I shouldn't take the mickey about Pike handling though, as I was left sporting some battle scars from one of these feisty buggers! Two months off has left me out of practice - well that's my excuse.

It's good to be fishing a river again. Onwards and upwards from here until March I hope.
Posted by Sean at 14:15 1 comment: