I managed a couple of trips over the bank holiday period, but both turned out to be a struggle.

The first was a largely unplanned effort on the local stretch of canal for about 3 hours. I set up 2 similar lightish rigs with maggot as bait and took a lazy approach of setting up a couple of alarms, while I waited for the fish to home in on the bed of bait I'd introduced. The plan was to mug one of those Silver Bream I've read about in a quick smash and grab raid.

While I was whiling away the hours listening to the cricket, my alarms failed to twitch even once. I moved 100 yards to try a second area and the result was similar - the only benefit being a slightly better reception on my personal radio! After 3 hours I slipped off home with tail between legs and not even a token suicidal Perch to show for my efforts.

On Monday I went back to Ryton with Brian. Sensibly we'd already agreed that the morning was a write off due to a solid band of rain being forecast. I can stand a bit of rain, but if they forecast it will be wet when I start, wet when I plan to finish and very little let up in between, then I tend to avoid it unless there's something special to fish for.

The revised plan was a 2pm start to catch the back end of the rain and then to fish until gates closed around 8pm. The flaw in the plan was that it didn't seem to fully dry up until 6ish, so we suffered more rain than expected.

It was a tough old session with Brian managing one Tench in the 2.5-3lb class. I had two fish of that stamp myself and one better sample that went 4lb 15oz and fought like a demon, along with a solitary Perch. 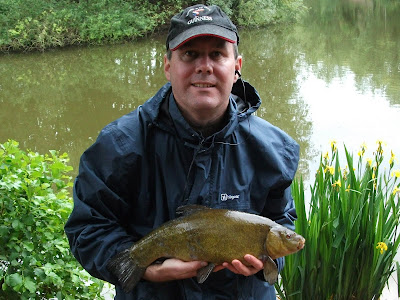 Barry the Fly was also on hand again and he was struggling too - just a Tench and a Perch for his efforts.

Not the best of fortunes over the holiday period and I even gave up listening to the cricket (test match) early on Monday afternoon, having declared it a bore draw in my own mind. Listening to 8 wickets crashing in next to no time (and an England win) would have been a nice tonic while waiting for the Tench to sniff out my bait!
Posted by Sean at 13:56 4 comments:

Inspired by the recent reports of other bloggers who've visited Ryton Pool recently, I twisted Brian's arm for another crack at it. Bear in mind Brian was on a run of 4 consecutive blanks at Ryton, I was pushing my luck a little, but he agreed to give it a go.

It was an early afternoon start and I was expecting to find a few others on the bank, but the place was deserted. We took the customary walk around the back of the island and doubled up on the largest of the pegs on offer.

We both balled in on a similar line before setting up our rigs. I set up a straight lead rig and got it up and running, at which point Barry the Fly popped by for a chat. It's quite weird talking to someone I've never met before, who doesn't figure in the anglng press and yet I knew quite a bit about him. He was a very refreshing and honest guy to talk to and I have to admit to sharing his various simplistic views on fishing. Anyone who can catch a 10lb+ Bream and 22lb+ Pike from Ryton is worth listening to. I'm yet to encounter either of these species at Ryton, let alone bank fish like those.

The session went pretty much to plan for me and I took a steady stream of fish throughout. The first few Tench were of a small stamp, before a few better ones moved in. The first better stamp fish went 4lb 6oz. 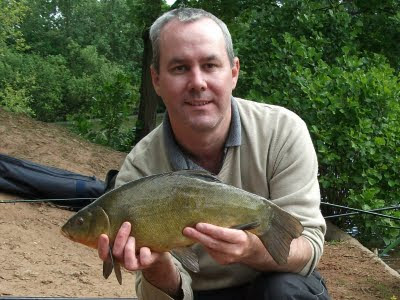 The next Tench caught me a bit by surprise in that I didn't appreciate its size during the fight. I knew it was a 5lb+ fish, but Brian seemed to be talking it up quite a bit and when I lifted up the net, I knew it was a pb. It went 6lb 12oz, which is over 1lb on top of my previous best (also from Ryton). Having had plenty of 4's and low 5's over the years at Ryton, I was a bit chuffed with myself to finally crack the 6lb barrier- and by quite a way. 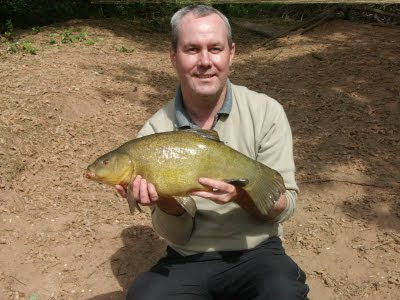 In total I caught 10 Tench, which is a record for me in a single session at Ryton. Pick of the others were: 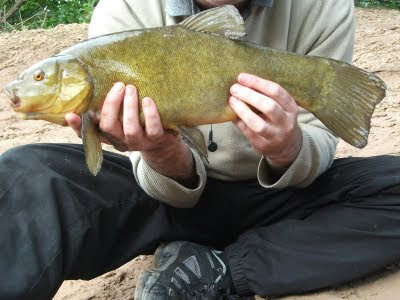 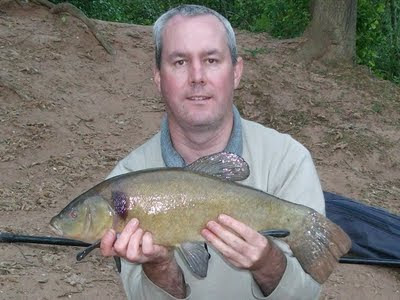 I didn't actually notice the large blemish on the fish until I looked at the photo afterwards! This one also equalled my previous pb too.

I had a few Perch up to about 12oz and in total I had around 35lb of fish. The really good news was that Brian didn't blank either. He did have me worried for a while, but he managed to put 3 Tench on the bank and I think his faith has been restored - if only a little!
3lb 8oz 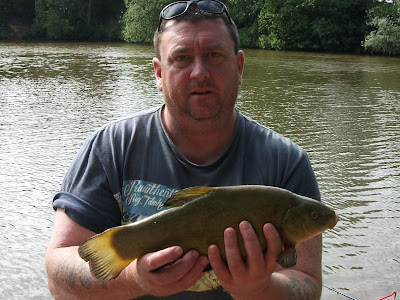 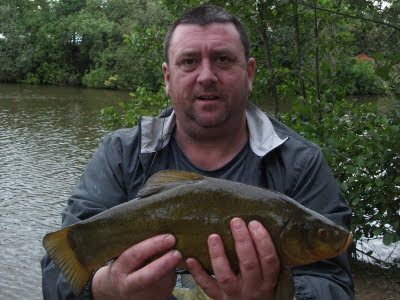 The larger of the two fish led him a merry old dance and I think Brian was a bit surpsried as to how much power these fish have.

A very enjoyable session and on the way back to the car we passed Barry who said he'd taken 6 Tench himself. They are definitely getting their heads down.

A Brief Catch Up

Since my last post I've managed 3 trips, but all proved to be fairly uneventful.

The first effort was a return to Snitterfield Reservoir in search of Crucians. I started off OK on the Roach and Skimmers, but I never managed to get a sniff of a Crucian in a 5 hour session. Charlie, fishing on the next peg, managed a couple of them - both would have sneaked over the pound mark I'd say.

Bites petered out for me as the day wore on and another failed Crucian trip was the end result.

The next session was an even briefer affair due to afternoon committments. It was at Jubilee pools on the Island Pool. This time I wasn't fussed about catching anything in particular - it was going to be a short session and I was just happy to catch a few fish.

Momentarily I thought I'd got a bonus silver fish, but I ended up with something that looked distinctly hybridised. It was a nice looking fish of about 1.25lbs, but sadly it was neither Roach, nor Rudd. 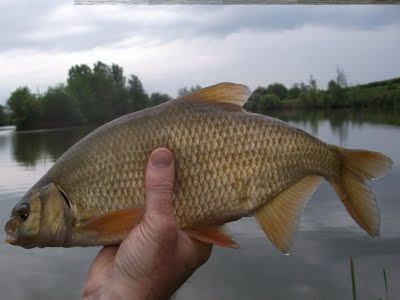 I had a number of other smaller fish on the day and as usual for my visits to Jubilee, it rained quite a bit. I really must make the effort to pick a belting day next time when the Carp are likely to be going bonkers on the surface!

Brian returned to action after an absence for this trip and plucked out some small fish. The best of his bunch was an 11oz Perch, which we stuck on his challenge scorecard. 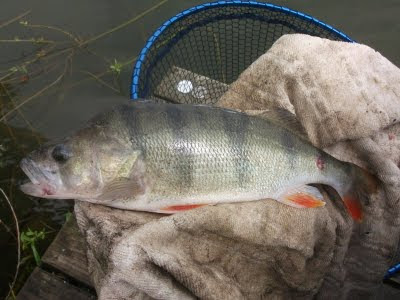 The third trip was to College Pool in the hope of maybe finding a low double figure Carp, one of the elusive Barbel, or perhaps adding to our Bream or Perch scores.

It ended up very similar to my previous visit and it became clear that the fish are well into spawning mode. Aside from the small Perch, proper bites were tricky to come by. I had a fair number of bite indications, but it was mostly line bites.

Brian actually had a bit of early success, but it was to be his only Bream of the session. At 4lb it matched his previous best for the year. If it had managed to retain its fins in better condition it might have made an extra ounce or two though! This fish had seen a few battles in its time I think. 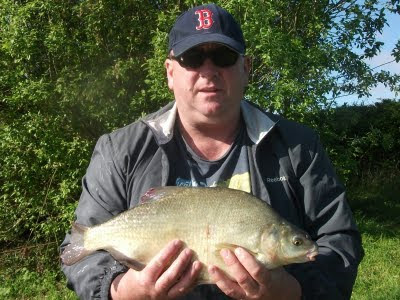 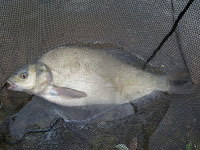 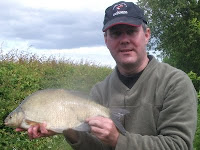 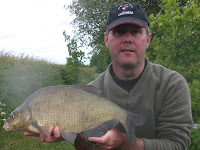 May has proved to be a bit frustrating so far. I'm desperately in need of some inspiration from somewhere...and a lot more hours on the bank wouldn't go amiss either! Only 1 month to go now until things kick off properly again. Holidays have been booked from work in readiness and the an early season trip to the glorious River Wye can't come soon enough. Meanwhile, I should probably be putting my time to better use looking for the specimen sized Silver Bream that live just a short walk away!
Posted by Sean at 12:23 1 comment: