The chance to fish last week didn't materialise in the end and that signalled an early end to my river season (although it pretty much ended in mid December if I'm honest). To rub salt into the wounds I drove out into the Warwickshire countryside this morning and the Avon at Barford was looking in great nick - a far cry from the flooded scenes of recent months.

I only had a shortish 4 hour session planned for today and I was mulling over my options, but settled for College Pool in the end. With its deep water, it was the perfect place to try out a new rod I'd bought a few weeks ago. I'm gradually building up an arsenal of rods to cover various situations and I couldn't resist grabbing a bargain deal of a Stillwater bolo rod (£59.99) which came with a free baitrunner reel and was also sent free of charge. The reel was loaded with braid and was put through its paces a few weeks ago on a couple of pike sessions. It coped well enough.

The rod (just shy of 20ft) was teamed up with a centre pin reel. It allowed me to float fish with a fixed set up rather than having to use a slider approach. Some might question why I don't just pole fish to allow for greater comfort and flexibility, but I've been bitten with those tactics before. The pool contains some hard fighting carp and if you hook one on pole gear, you either need some very substantial gear or a huge dose of luck to get them out.

I prefer to have the back up of rod and line wherever possible and this is where the bolo rod gives me another option. I can fish a relatively light set up in a similar way to how I'd fish the pole, with excellent presentation. The difference is that any bonus carp or barbel would probably smash the same set up fished on a pole, but with the bolo I have a fighting chance. 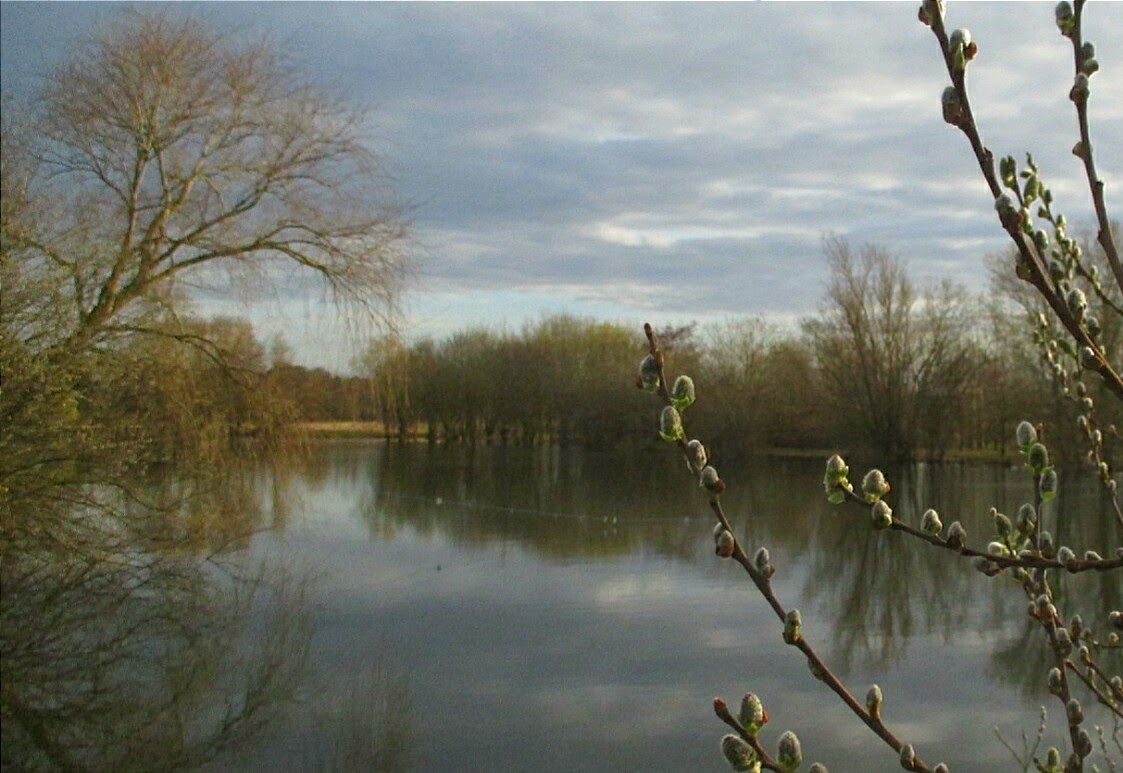 Although I'd turned up with the rod already equipped, I took my time to get started. I balled out some groundbait not too far out (but still into 19ft of water!) and took time to have a wander around the pool, before taking in a coffee, then making some final adjustments to my set up. With no-one around it was just peaceful and relaxing on a gorgeously mild March morning.

It was a difficult start, with a few roach and perch showing, but with no great enthusiasm and bites were slow to come by. I was pondering whether my tactics were right and considering maybe reaching for the quiver tip rod. Then the float buried with more purpose and I bumped off a better fish. That was the signal that bream had finally found the bait and with it my confidence went up a few notches.

I patiently stuck to my guns and managed to catch four bream over the next couple of hours. None of them monsters - all between 4lb and 4lb 9oz. 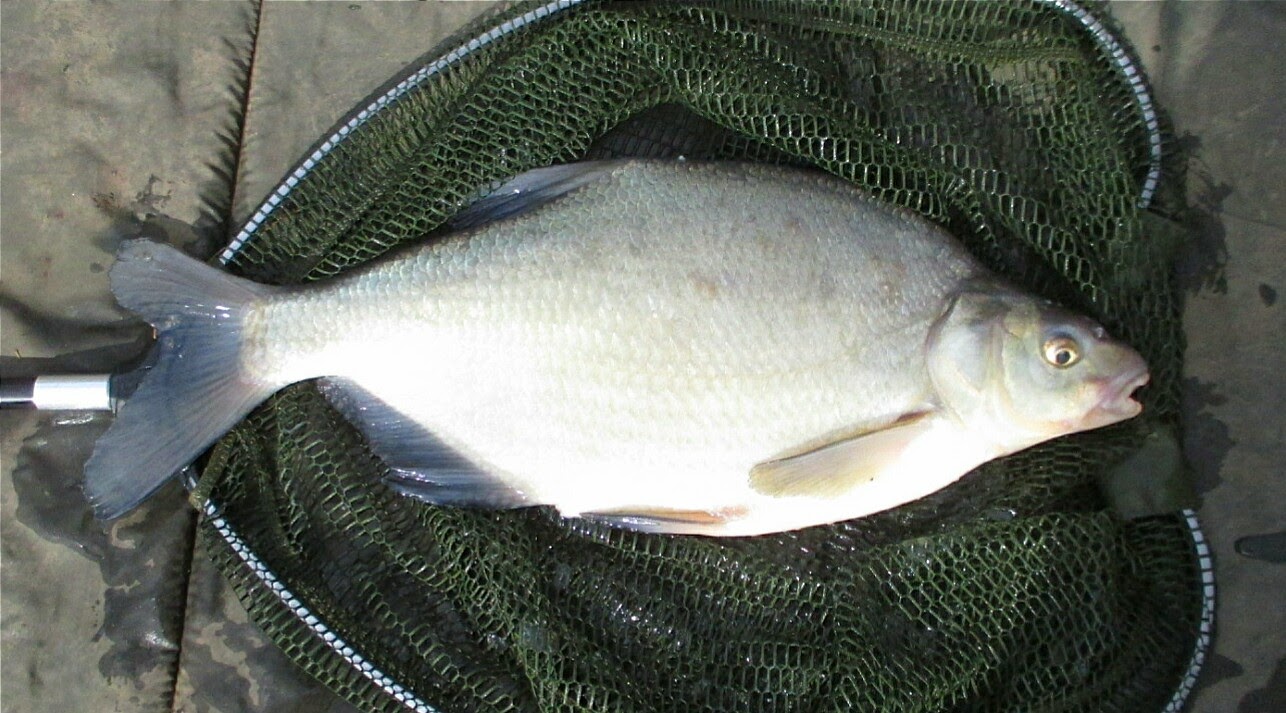 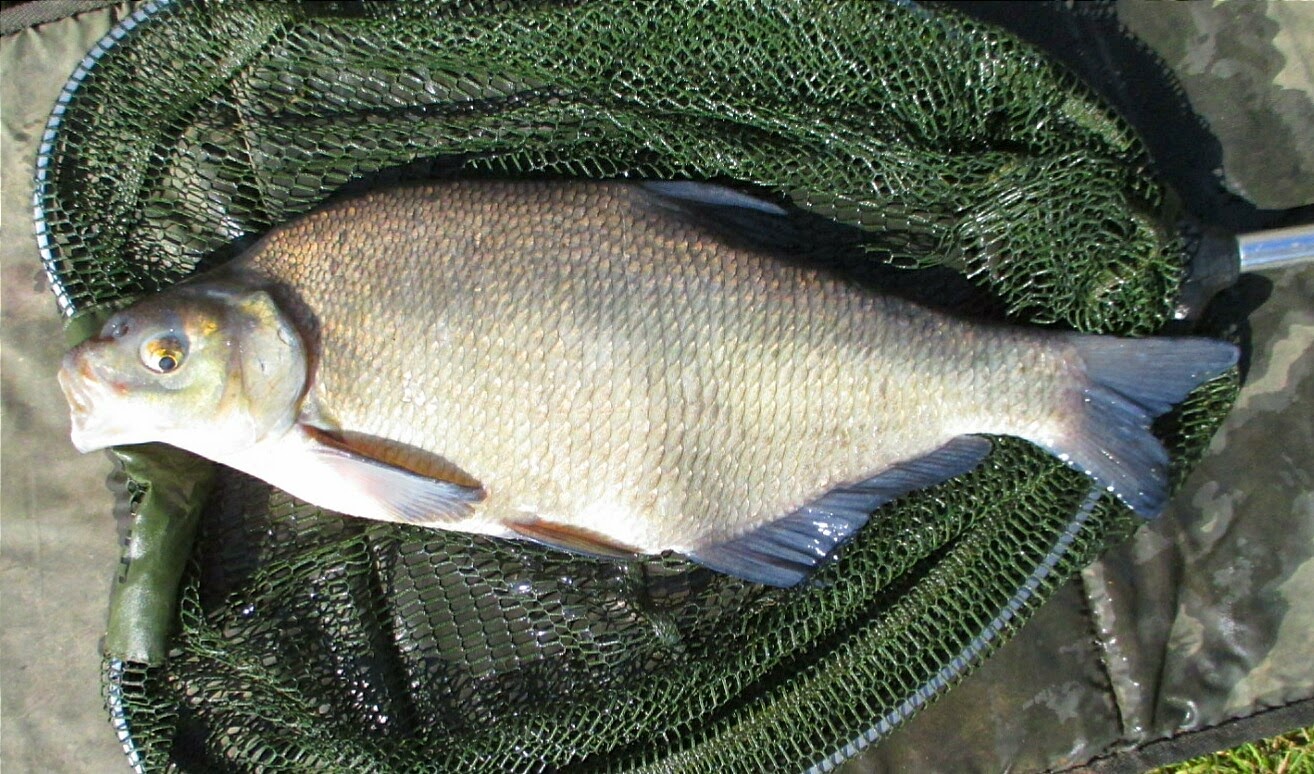 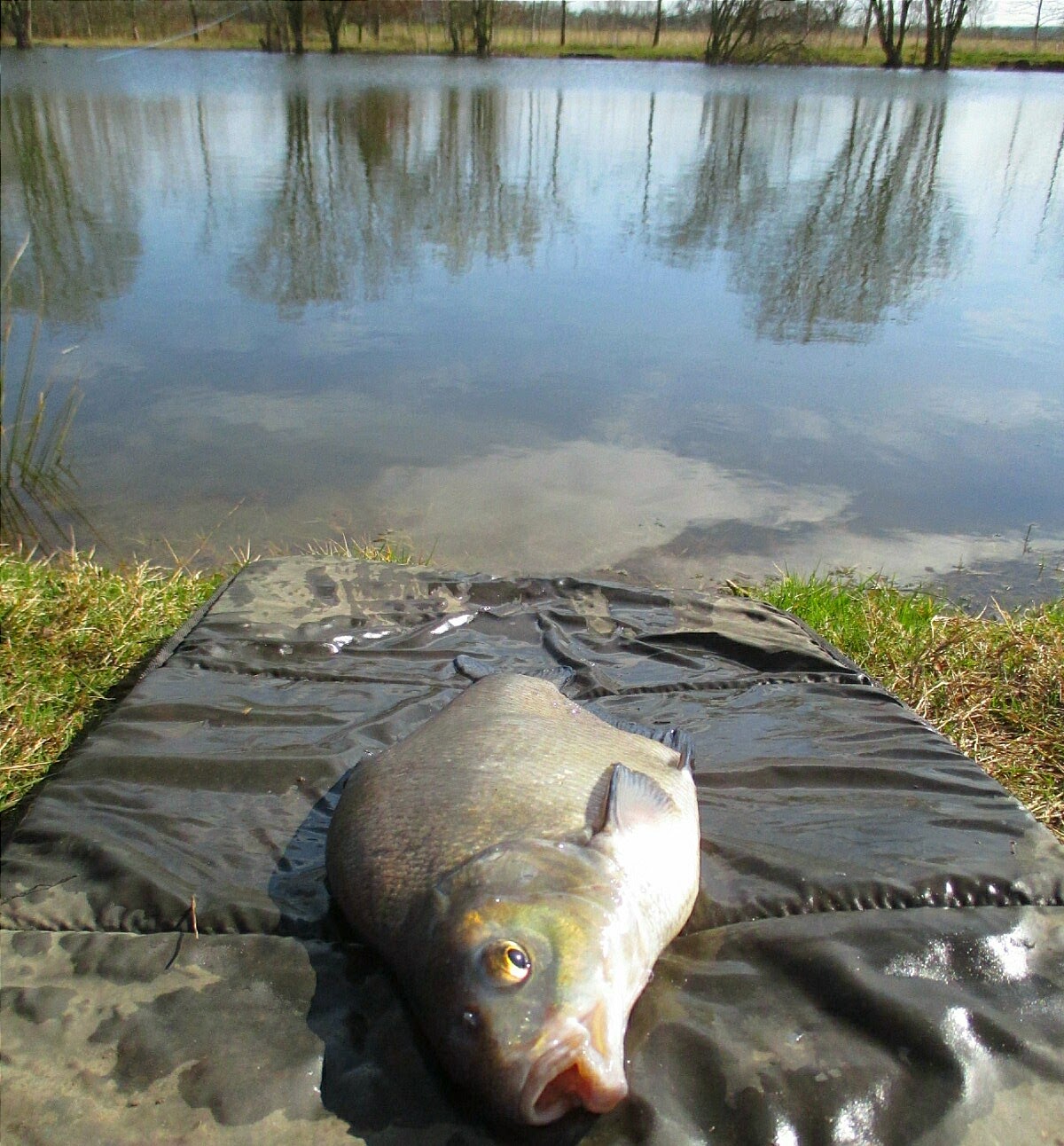 It was a pleasant few hours and I had the place to myself for the whole session - just how I like it. I assume that Jubilee Pools reopening after their winter shut down, perhaps saw a few people taking that option instead. The rod performed well enough on its first outing and it's more than adequate for my needs in this type of situation.

I'm hoping to get down to Snitterfield soon to see how things are warming up down there, while I still have a ticket. I'm reviewing my plans for the season ahead and it's likely that some of my current haunts will have to bite the dust. I'm looking to expand my river fishing to include more of the Avon, along with other local rivers such as the Leam possibly. I just need to acquire a stillwater ticket for back up. Enquiries are ongoing...
Posted by Sean at 14:43 2 comments:

A couple of downpours in the latter part of the week saw the river on the rise again. Nothing too serious though, but an extra 4 inches or so on top of last week's conditions - thankfully it was on the drop during my Sunday session. The forecasters predicted some wet and windy conditions for the afternoon, so I headed off at 7am with the intention of packing in when the rain set in.

It has been a strange old season this time around. Mostly mild throughout, very dry for the first part and then horribly wet for the back end. Winter has decided to have a year off and we seem to have retained a very much Autumnal feel to our weather for months on end now.

For what is possibly my last shot at the river this year I decided to go for roach. With some colour in the water, I figured I'd have a go at putting togehter a bag of redfins. I even brought my keepnet out of retirement - it hasn't seen the light of day for a few seasons now.

I picked a peg where I was both comfortable on the bank and also had a bit of slacker water to aim for. My first choice peg was just too muddy and unsafe, but this peg left me with plenty of water to go at. 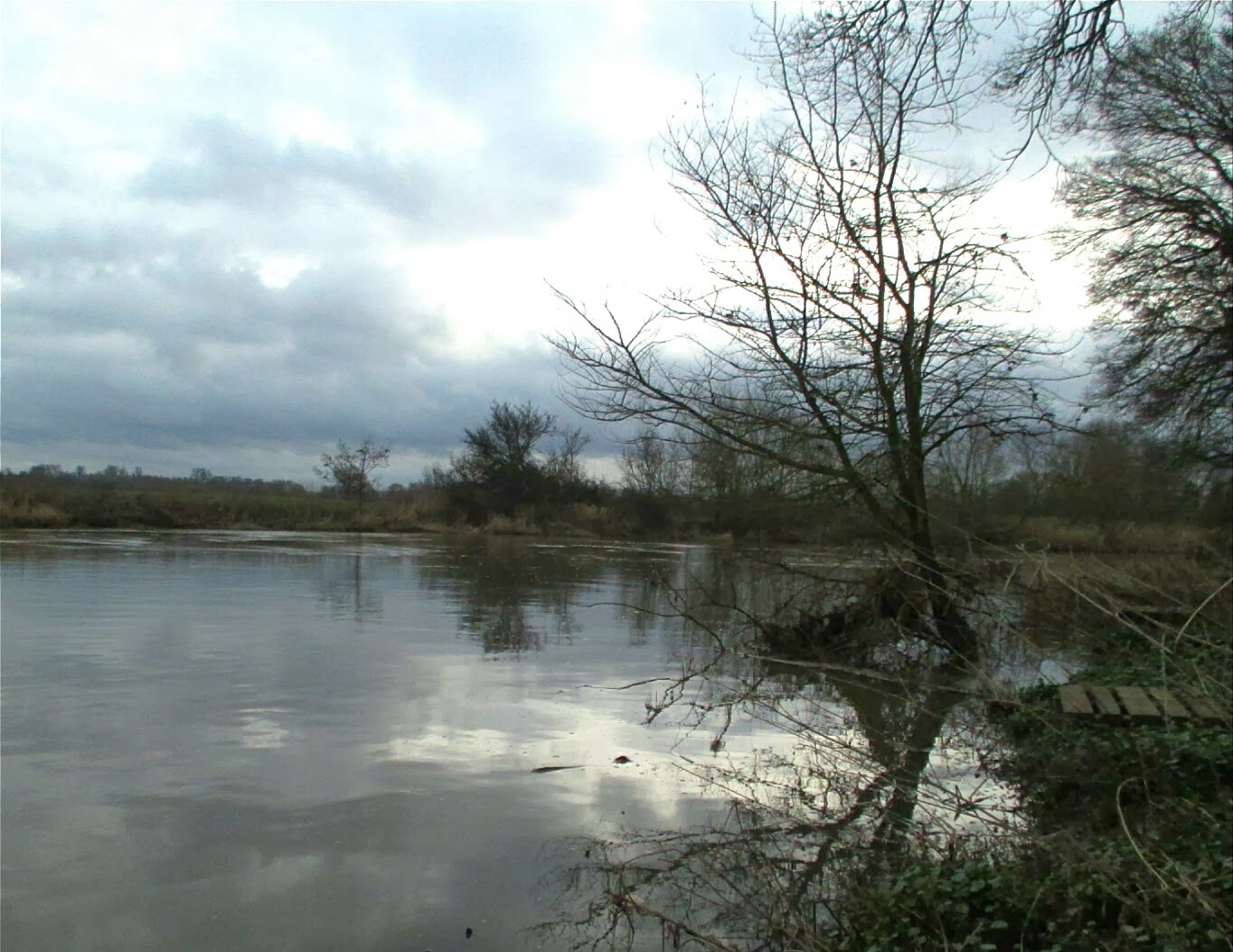 I went for a positive approach and boshed out a few balls of groundbait into about 10 foot of water and kept it topped up with an open ended feeder throughout the session. I opted for braid to help with seeing and hitting the bites. 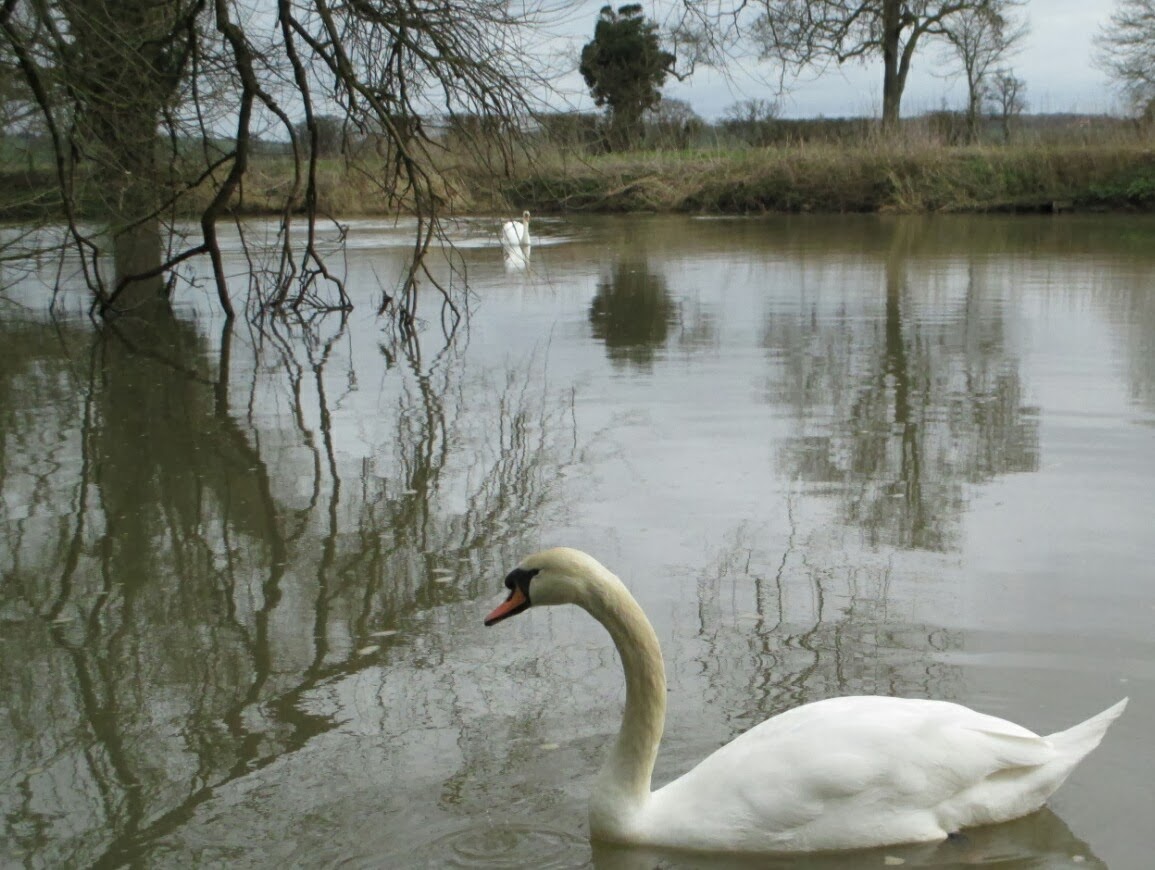 Fish came at regular intervals but were of a small stamp. It was mostly roach, with the odd dace thrown in. I missed a lot of bites that I just couldn't connect with. A more solid thump followed one of my strikes, but a hook pull soon afterwards left me cursing and knowing that bream were now probably in the swim. I managed to winkle one out in the last hour or so - a welcome fish of about 3lb. 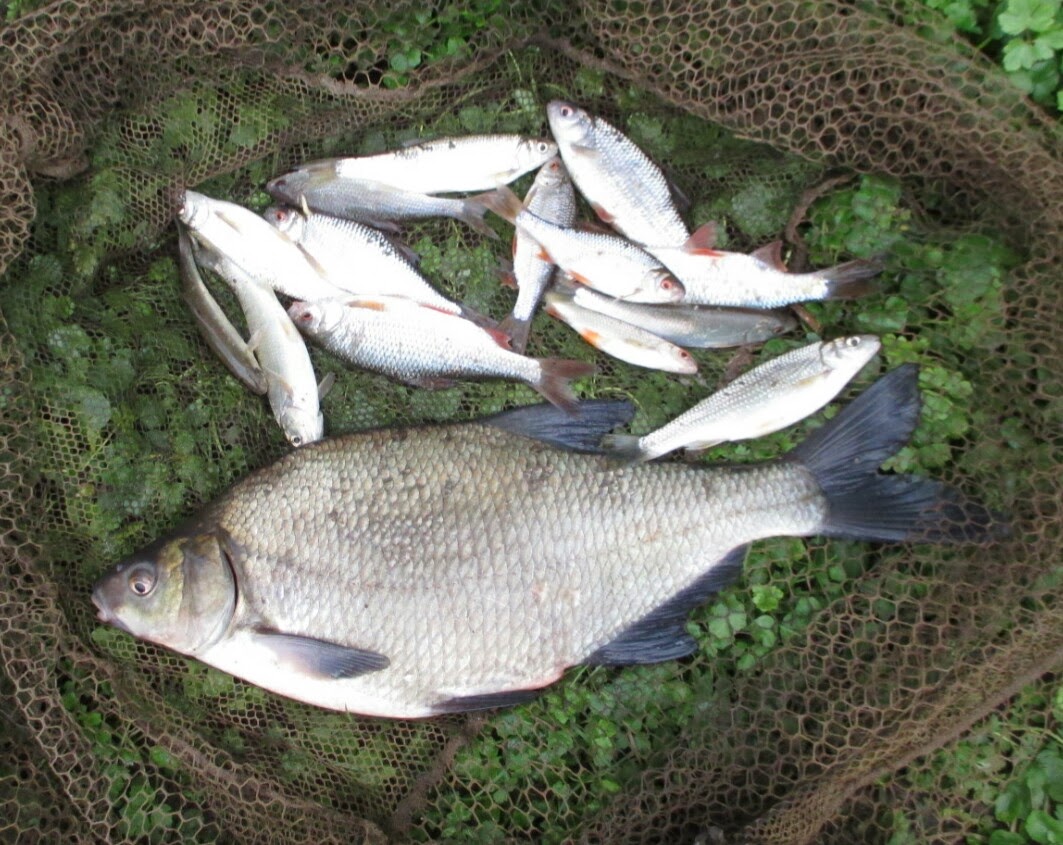 I popped out a deadbait for about half an hour at the very end of the session, but had no takers.

Next week we have some mild weather moving in toward the back end of the week and the river should be fining down again very nicely. It looks like it could be bang on for the last weekend of the season - just a shame that I'm mostly tied up already! There's half a chance that I might get out for a quick session though and I'll be doing everything I can to make it happen. It will be pike for sure if it does happen. I need to use up some deadbaits pretty quickly.

The Ricoh Arena fishing show is also in town again next week - be rude not to pop down!
Posted by Sean at 13:55 1 comment: