Last week I suffered an alcohol induced lay off, caused by a little Saturday night over indulgence. Eager to make use of the good river conditions this week, I crammed in a short afternoon predator session down on the Avon.

With time against me I decided to stay a little closer to home and for the first time this season I reached for my Warwick book. It's actually the first time I've held that book during my blogging years. I was a regular in years gone by though so I know their waters pretty well.

Two venues were on my mind for this session and although I wasn't a predator angler the last time I fished them, I had experienced my share of predator problems while fishing for other species at both venues.

In the end it came down to convenience. Saxon Mill was the closest, so it was always going to be tough to drive straight past it.

I have some fond memories of this stretch dating back 20 years. There are lovely swims where you can just hide yourself away from everyone and enjoy the scenery. The only drawback is the access, which isn't always the best.

One peg that would always feature amongst my all time favourites is the one sat in the shadow of the Guy's Cliffe ruins. Aside from the draw of the ghostly and imposing ruins, the peg itself is a classic. A deep nearside back eddy with plenty of overhanging features, a good flow of water just beyond and lots of far bank cover. 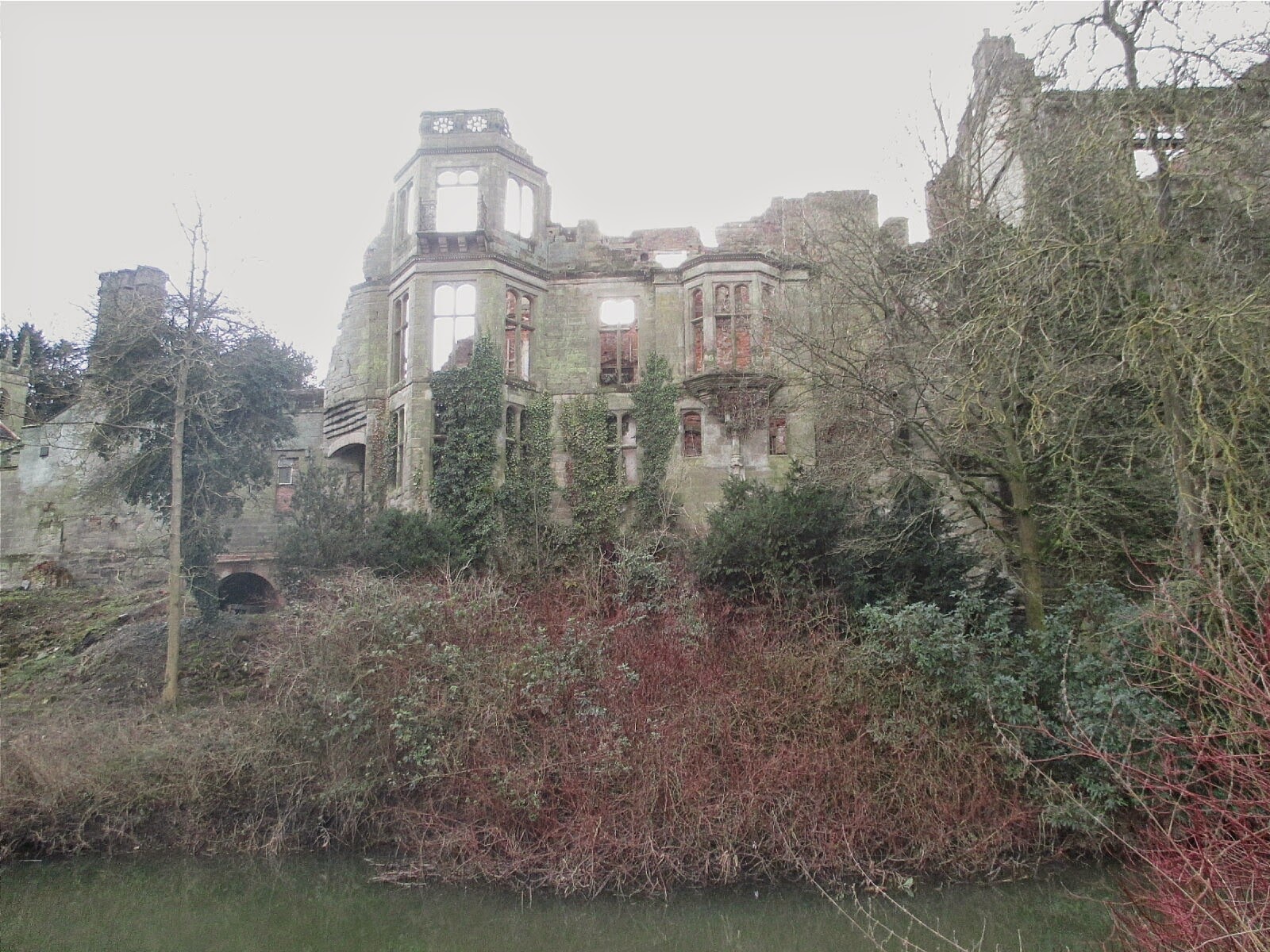 I concentrated on the slacker water on the nearside and dropped out a pair of deadbaits. Sardine to my left and lamprey to my right. 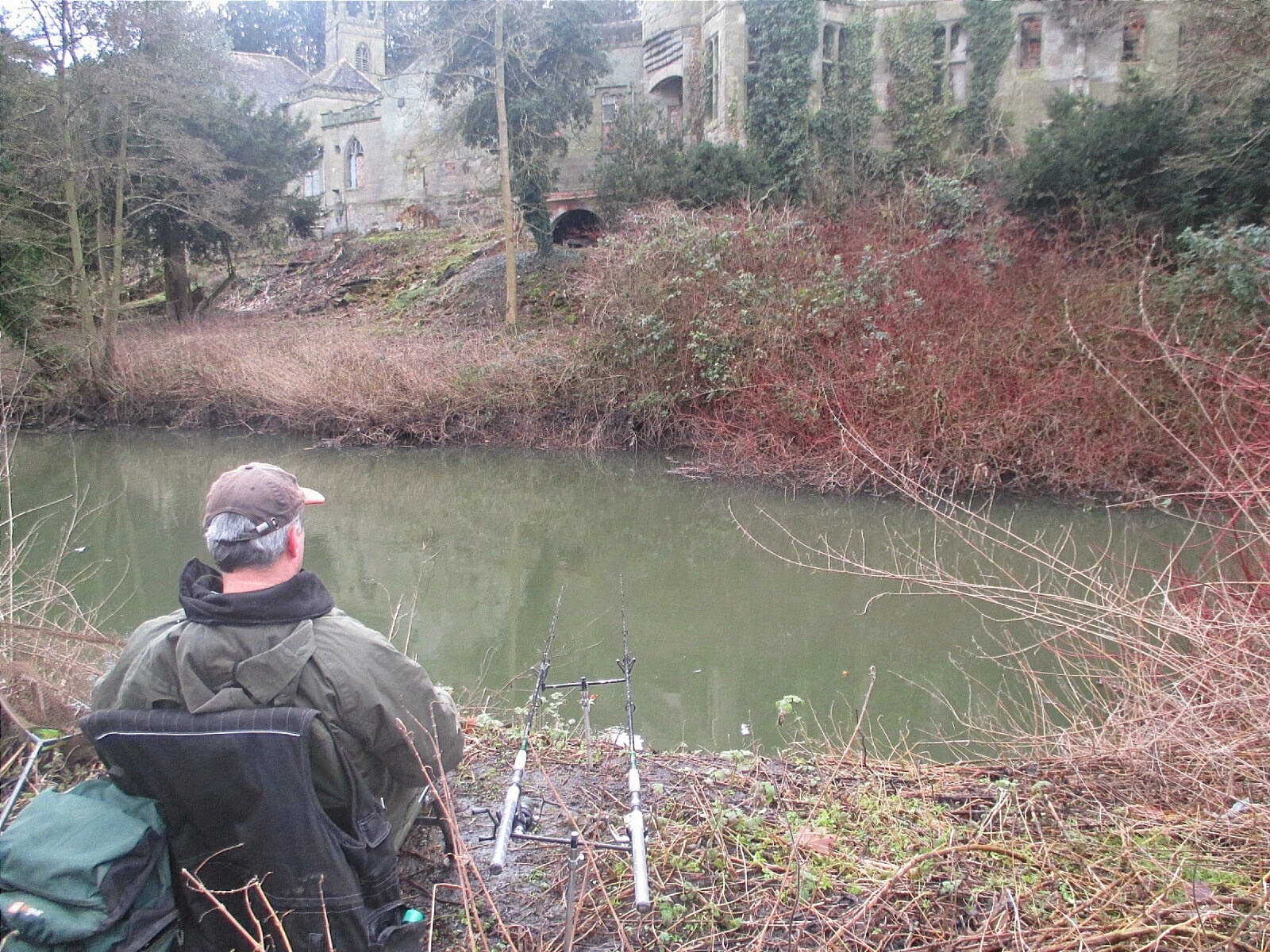 It only took the second move of the sardine to trigger a response. At the time I was just clicking off a few photos for the blog when the float twitched. It then dipped under and I was in business. It wasn't the hardest of fights though and I slipped the net under a pike of 7lb 8ozs. As it's the first I've caught from the stretch it set me a target. 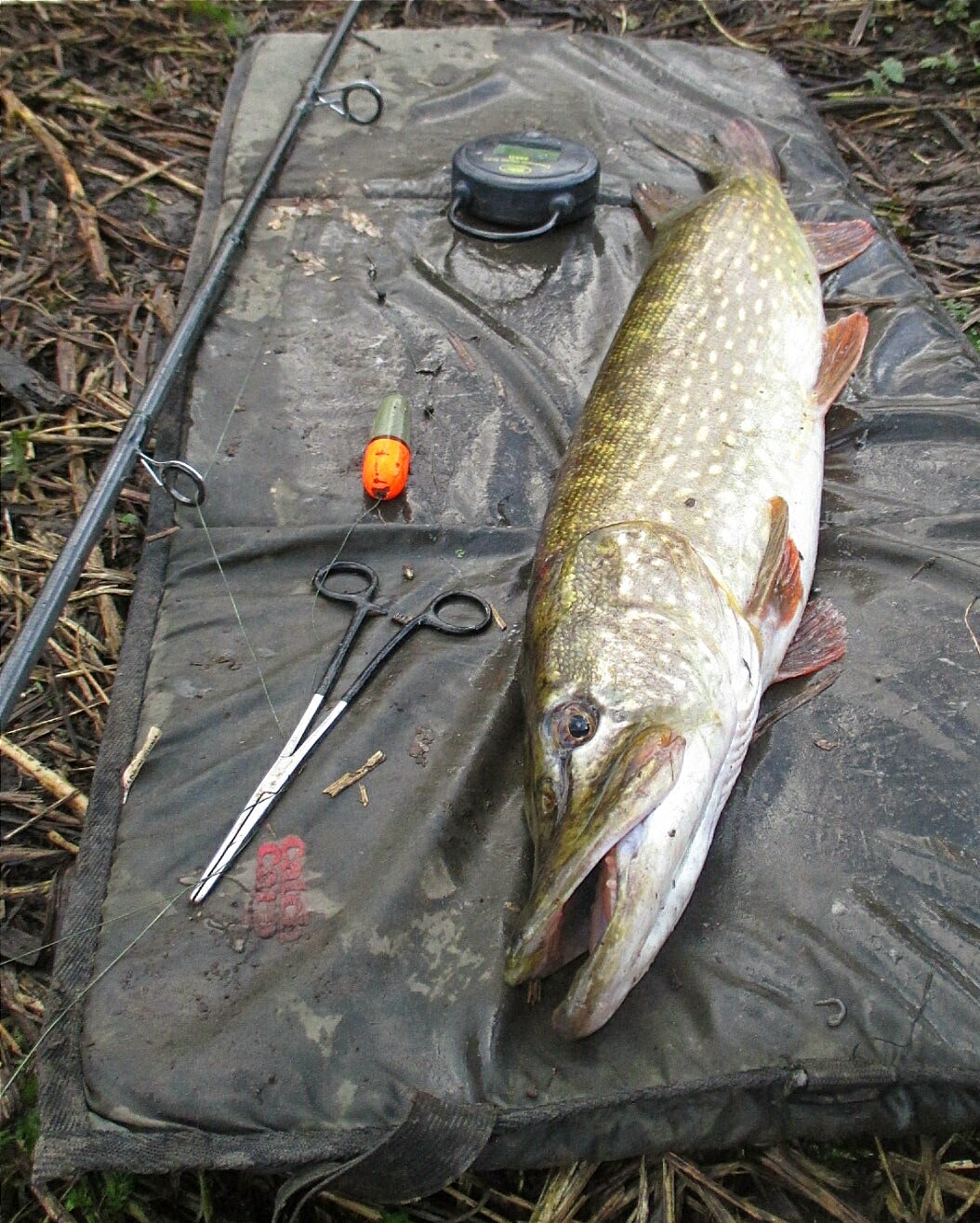 The rest of this fairly brief session was a struggle though. I wanted to check out the prolific mill race above the weir. At times it is stuffed with silver fish and that in turn means predators won't be far behind. I recall having some problems here in the past - not from a pike though, but from the biggest perch I've ever laid eyes on. 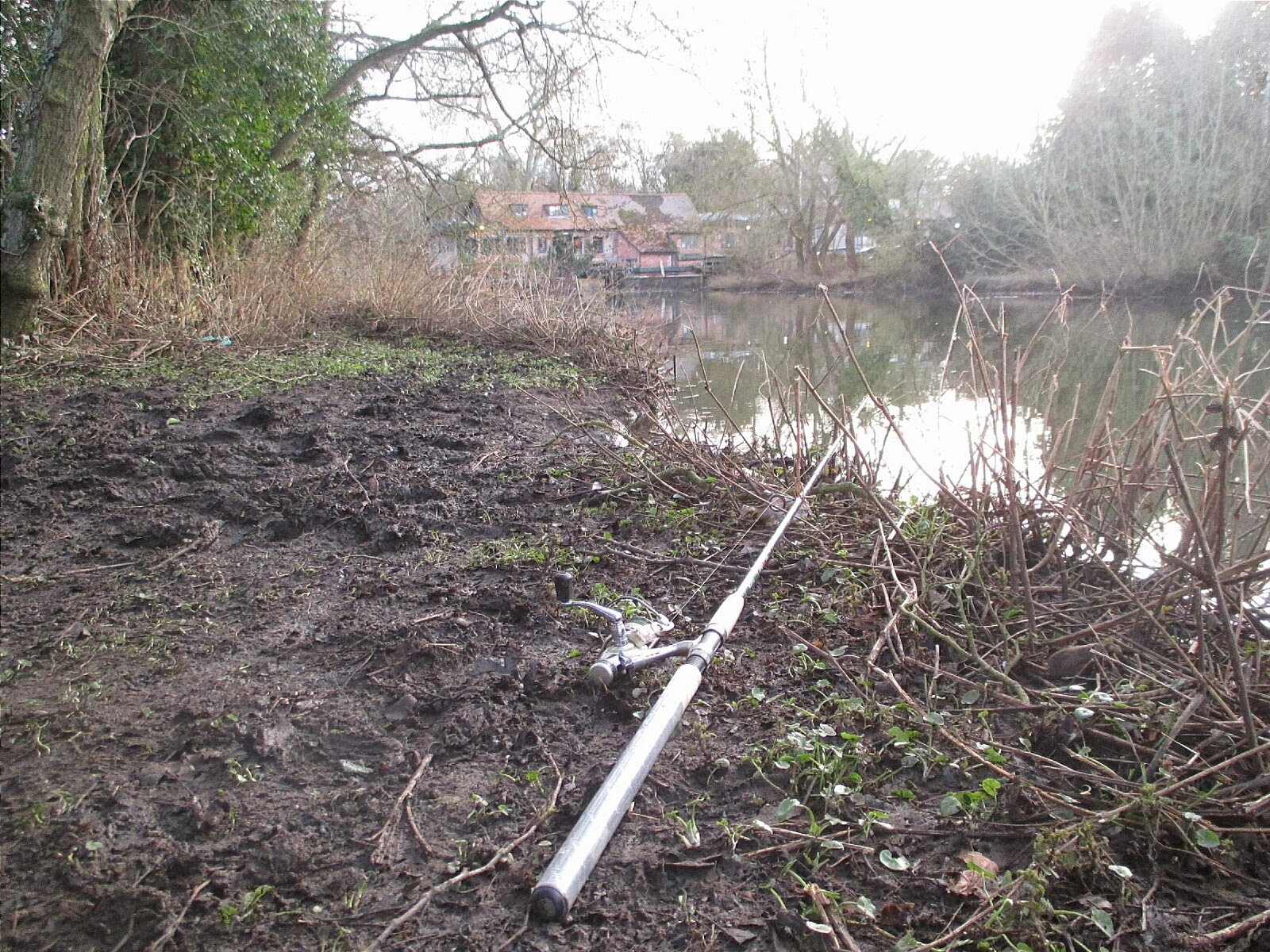 The promise wasn't fulfilled though and I retired to the weirpool for my last attack. It went totally wrong though, largely due to snag after snag taking its toll. I quit and was left to rue my decision to move away from the area near the ruins.

It was nice to reacquaint myself with the mill again, but it might be a while before I return. The weeks are slipping by quickly and other venues are still on my to do list.

The week ahead looks set to turn colder and particularly so towards the weekend, when there might even be potential for some of the white stuff. Maybe my snow pike will be on the cards this year after all?
Posted by Sean at 11:29 9 comments:

I wasn't really sure what to fish for this week or where to go - or if I'd even manage to get out at all. As it turned out the Avon had dropped down much better than I thought it would (to about 6 inches up on my normal stretch), while the Leam was struggling a little more to shift the excess water. I gave the nod to the Avon and headed off for an afternoon session.

With a dropping river that was nicely coloured, reasonable enough temperatures and overcast conditions, I opted to go for bream in a fairly sheltered and deep area. A simple feeder rig fished with a braid main line was the plan of attack, with a bunch of red maggots. Five balls of a fishmeal groundbait spiced up with some liquid molasses was used to kickstart the swim. A sleeper rod for pike was also dropped into the right hand margin 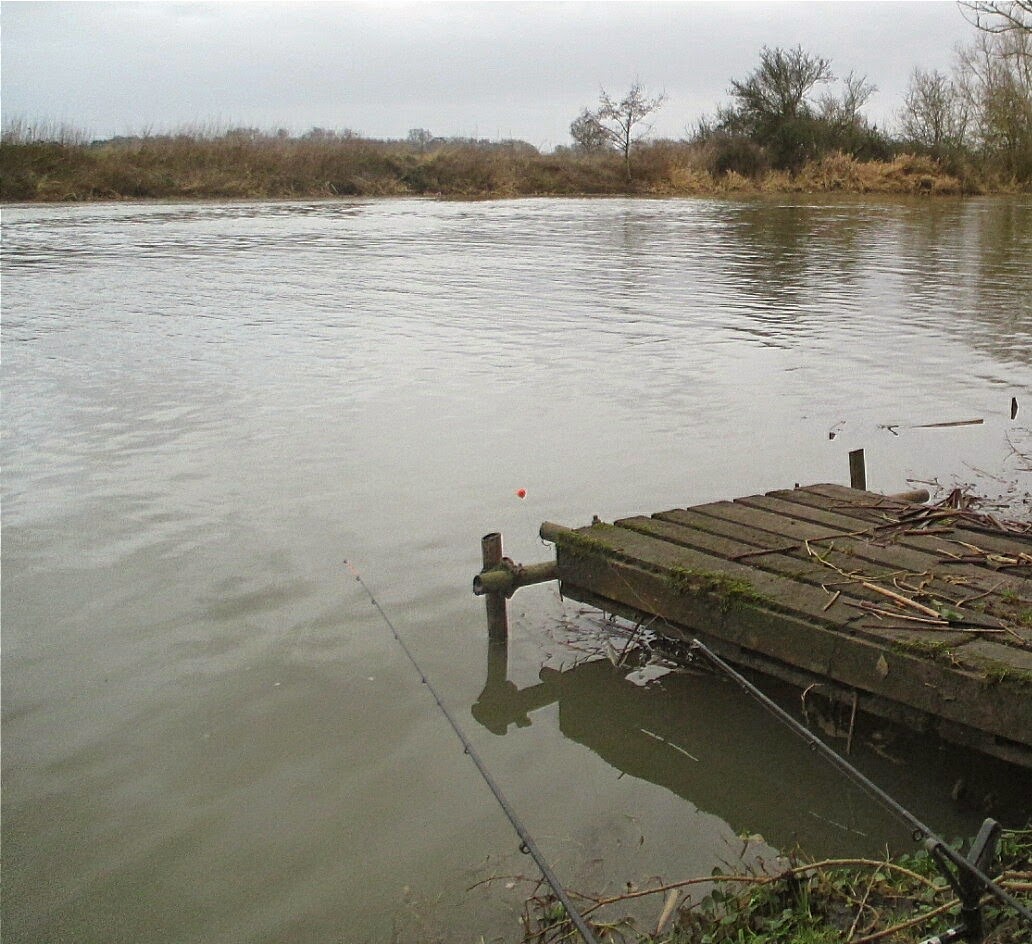 Initially the bites weren't as frequent as I'd hoped and so I scaled back the terminal tackle and lengthened the tail. It seemed to pay off as I started to connect with a few fish. Mostly dace to start with, but then a familiar slow thudding fight signaled that a bream was on the way in. It was actually a venue best for me at 5lb 1oz (ignore the scales in the picture - the net weighed 1lb). Excuse the poor photo - I discovered soon afterwards that the lens needed cleaning. 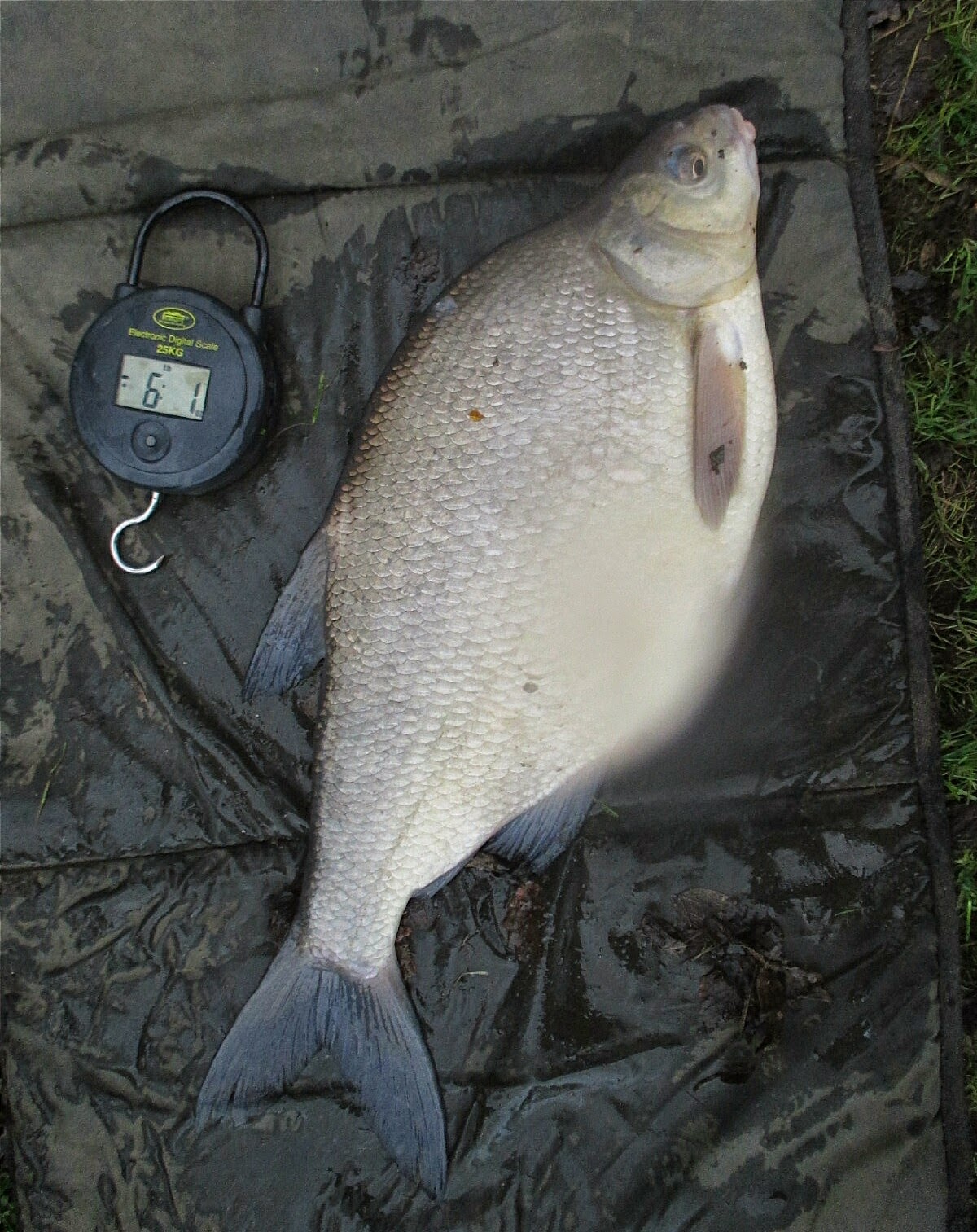 It was the only bream I had though and I missed far more bites than I managed to catch. No roach showed up at all, which was quite surprising. Just dace and more dace.

A new pike float I made recently was being put through its paces - or rather it was doing a good job of staying above water! I had moved it a couple of times, but it was a third move that did the trick and a fish was on very quickly. I find it's often like that with pike and you need to keep changing positions to make something happen. It's easier when you're actually having a dedicated pike session, but less so when you're also trying your luck with the feeder and hoping to build up a swim.

I made a right clumsy fight of it, managing to snag my landing net on an unseen snag beneath a landing stage. Luckily I freed it and then the fish nearly went under stage too. Eventually I got myself sorted out and netted the pike.

It was another very low double at 10lb 3oz - my third low double in as many sessions and all consecutive fish too. It's a strike rate I'd like to keep going! Many's the time when I've been cursed by jacks and can't get near a double. 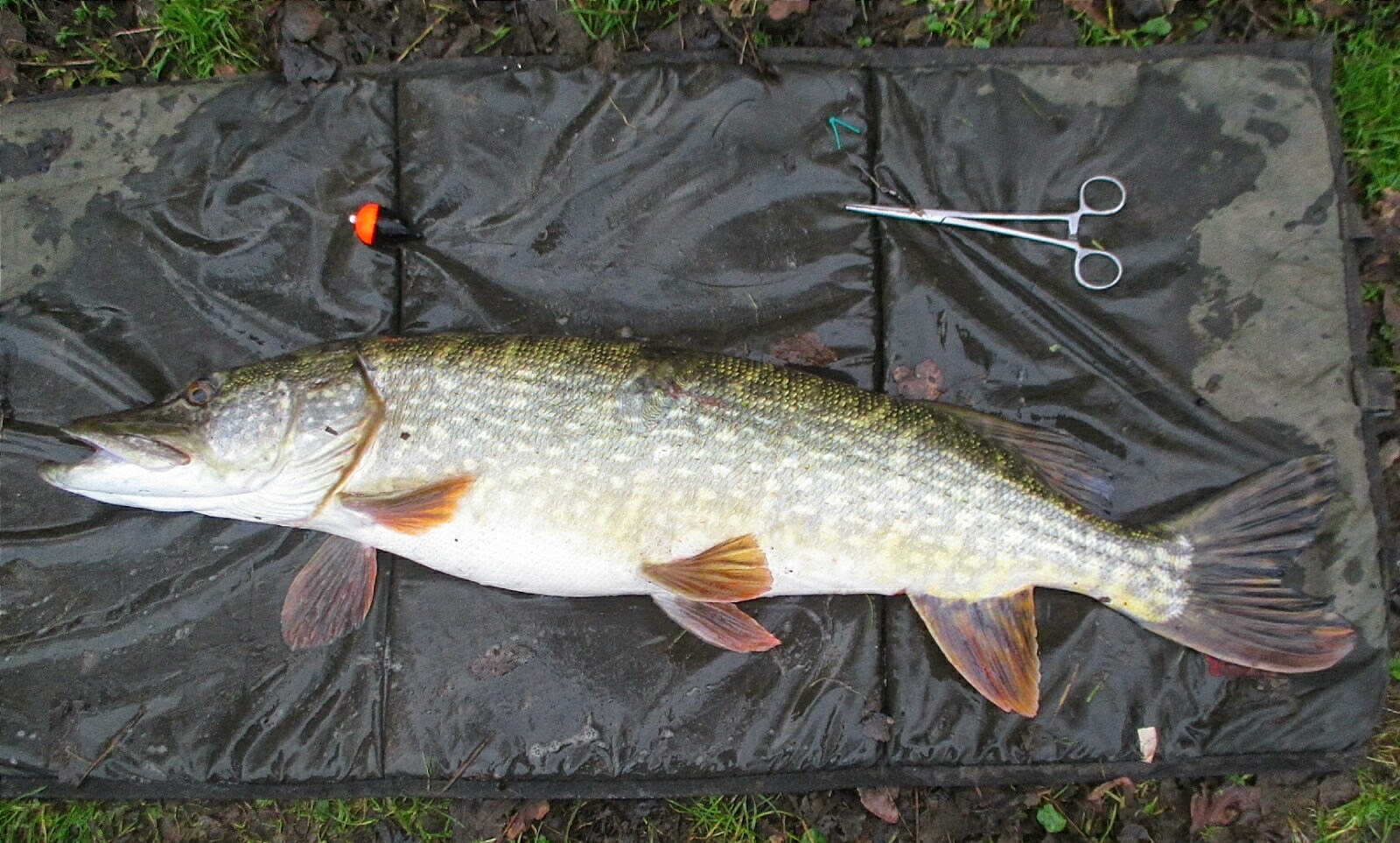 Something was niggling me though and when I got home I took a look through past catches. Sure enough this was an old friend last caught on Christmas Eve and previously caught in September too. Now you might think that I caught it from the same swim again, but that's not the case. I caught it in an area that I don't often pike fish and is about 100 yards upstream and around a bend from where I last caught it. I feel like this fish is stalking me! The good news is that it continues to put weight on - 2oz heavier this time.

I dedicated the final hour of the day to pike fishing and moved up to the banker area, but it failed me on this occasion. I did very briefly connect with another fish, but it slipped the hooks quickly and I never saw it. Quite often when this happens you can fool them again soon afterwards, but not this time. 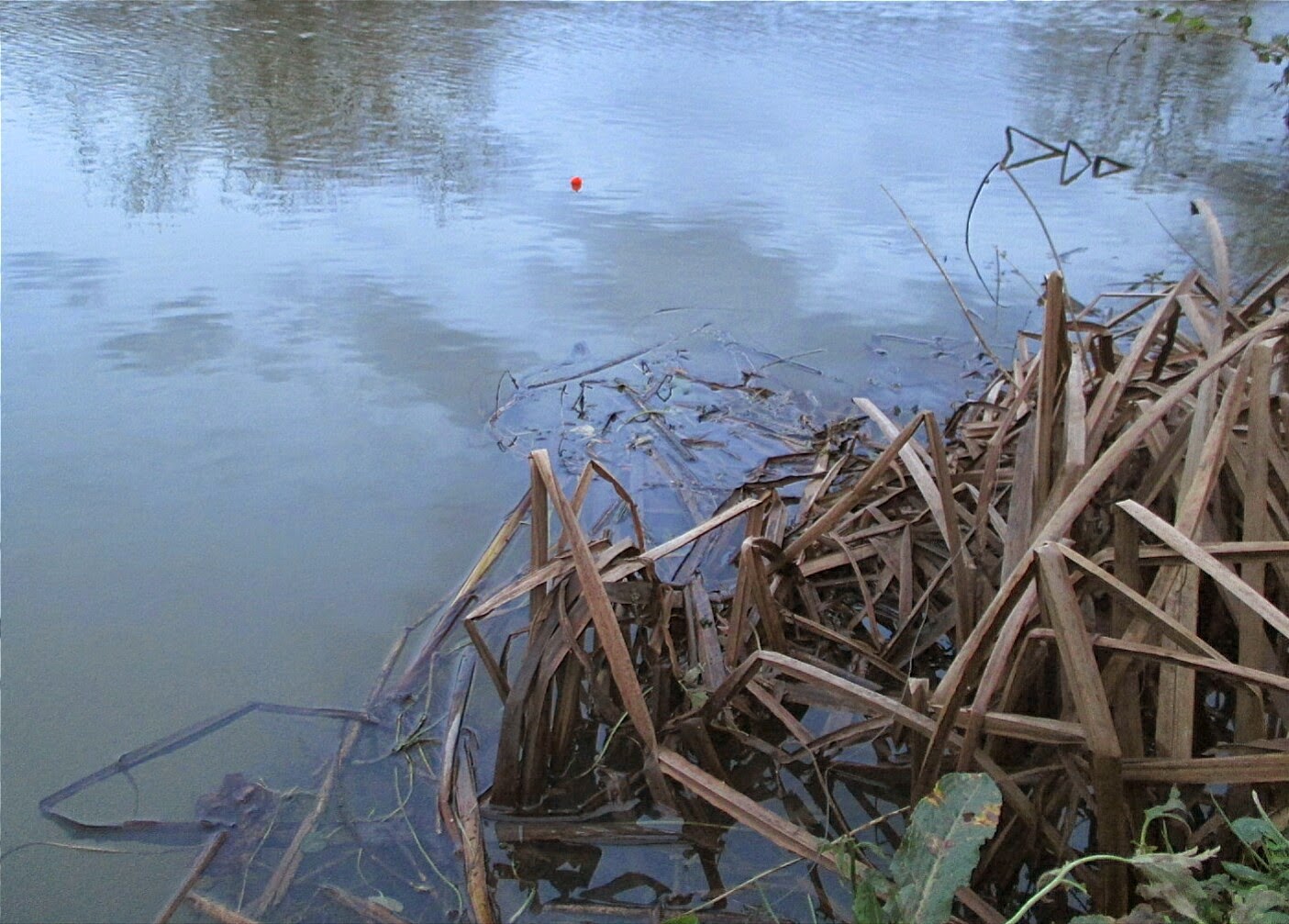 Another unsettled week of weather lies ahead, with temperatures dipping away towards the end of the week and frosts likely for next weekend.

My first outing of the year was on the Leam. The river was fine and the lowest I've seen it in a while, but the wind was howling through and made for uncomfortable conditions. Thankfully I was able to tether a brolly into position to shield myself from the brunt of it. 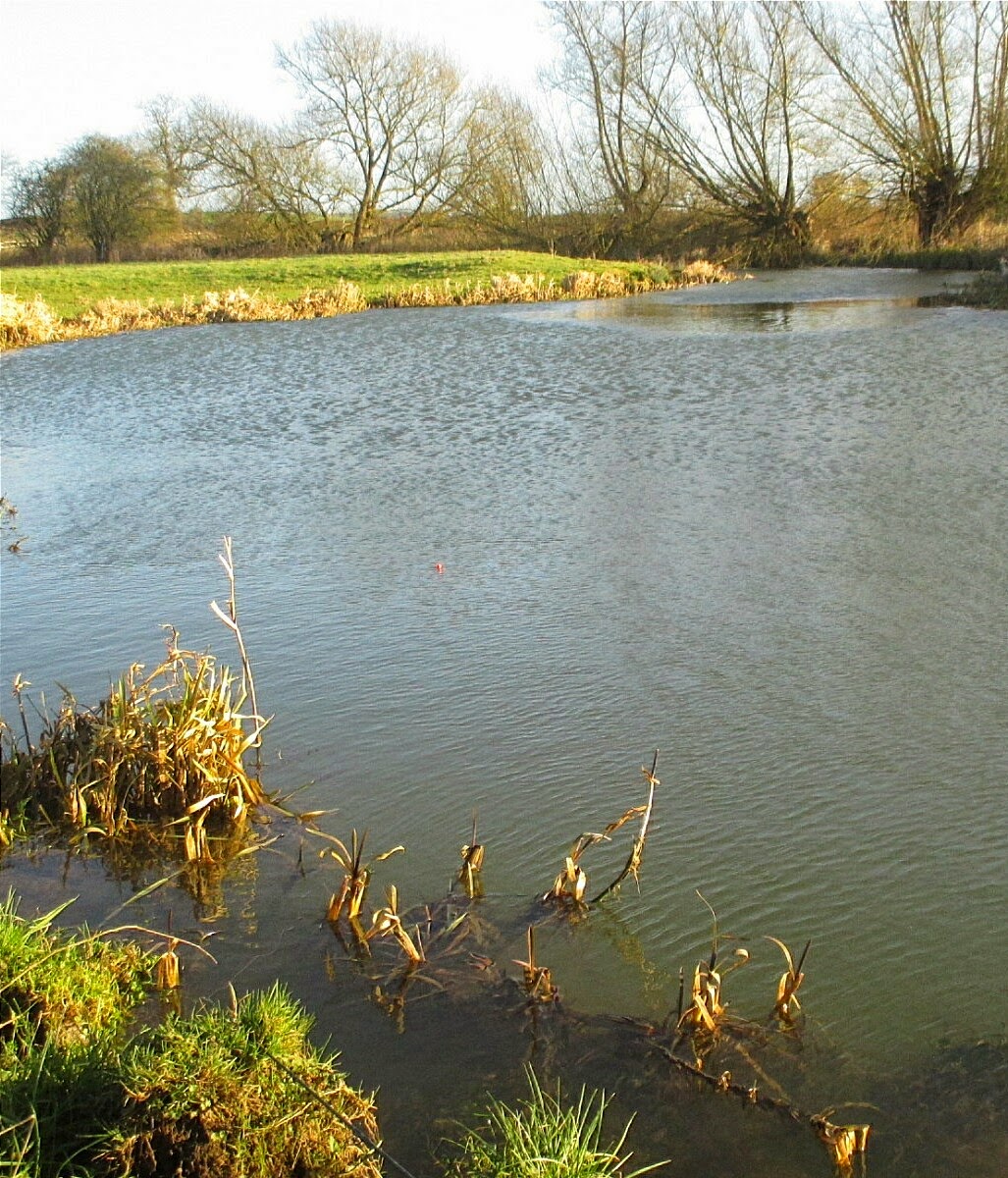 In no mood to mess around with float gear, I decided to go for two feeder rods, occasionally sacrificing one for a pike rod. As is usual, fish were topping all across the river while the light levels were low, but they disappeared noticeably as it got brighter.

Bites were never terribly frequent, but all the action took place early in the session. A handful of silver fish were caught (roach and perch), but nothing above 6oz. My first attempt with the pike rod was more successful though and following the first repositioning of the lamprey bait, the float was doing a dance.

A fairly uneventful fight followed and the fish was quickly in the net. It was a long, lean fish that easily has the scope to be a hefty double, but my instincts were that it was still a single figure fish. Brian helped with the weighing and it just sneaked into double figures at 10lb 1oz.

When I looked back at my blog, I spotted that it was the same fish that I caught back in September when it was 10lb 8oz. It came from the same spot in the same swim - maybe it doesn't get out much?!

Bizarrely, my last post of 2014 also saw me catching a 10lb 1oz pike from the Avon, that I'd previously caught a few months earlier. I'd much rather have caught a completely different fish though - even if it was smaller. 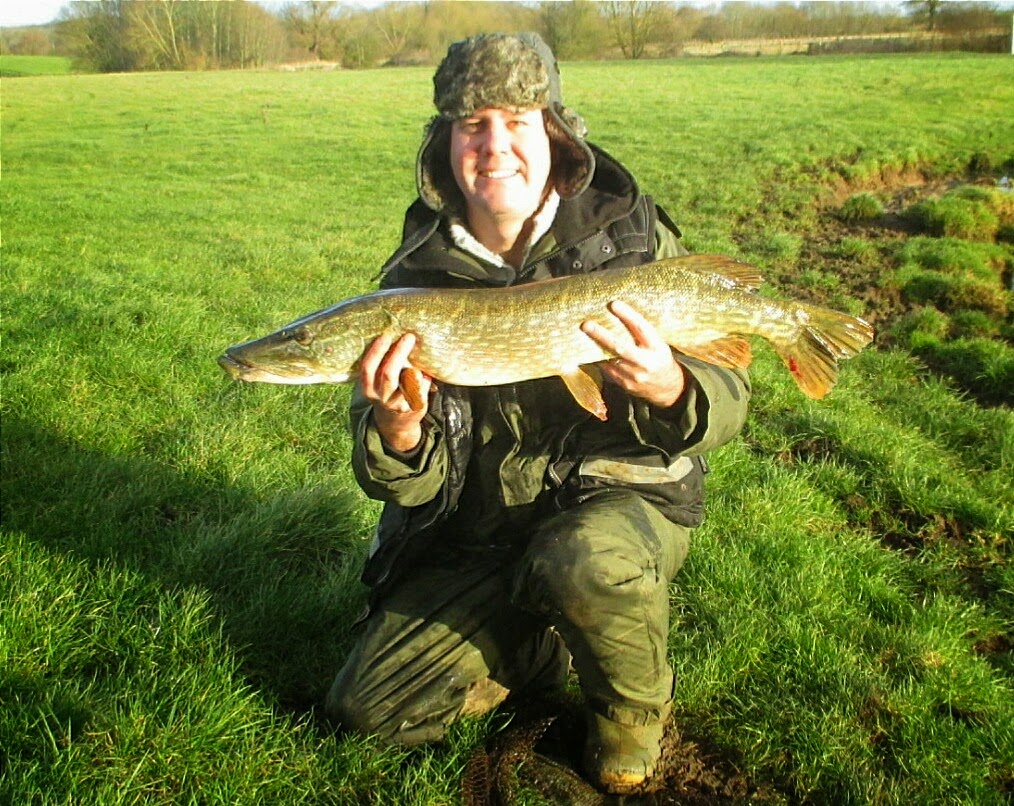 As I'm sure many fellow bloggers do around this time, I've been reflecting over the past year's fishing. It was pretty slender pickings for me in 2014 and I probably spent less time than ever on the bank. A positive that came from the year was discovering the River Leam. I've still barely scratched the surface and have made loads of mistakes in my approach to it, but there's enough promise to keep drawing me back. It's a beautiful location where you can just get totally away from everything and that's how I like it.

One thing that I intend to do in 2015 is to diversify a little more. I spent too much time on the same waters in 2014. So, I've drawn up a list of venues I want to fish and I'll chip away at it throughout the year. Big rivers, chalk streams, canals, lakes and reservoirs are all featured. Many of them will be new to me and that's all part of the fun.

I've also been busy making a few new floats over the festive season, having received a fresh stock of supplies. It's just something I enjoy doing during quiet times when I can't get out fishing and I've done it for about 5 years now. Some are a little bizarre and experimental, but here's a selection of balsa bodied floats that are waiting for their final coats of yacht varnish. They are a mixture of cane and crowquill. 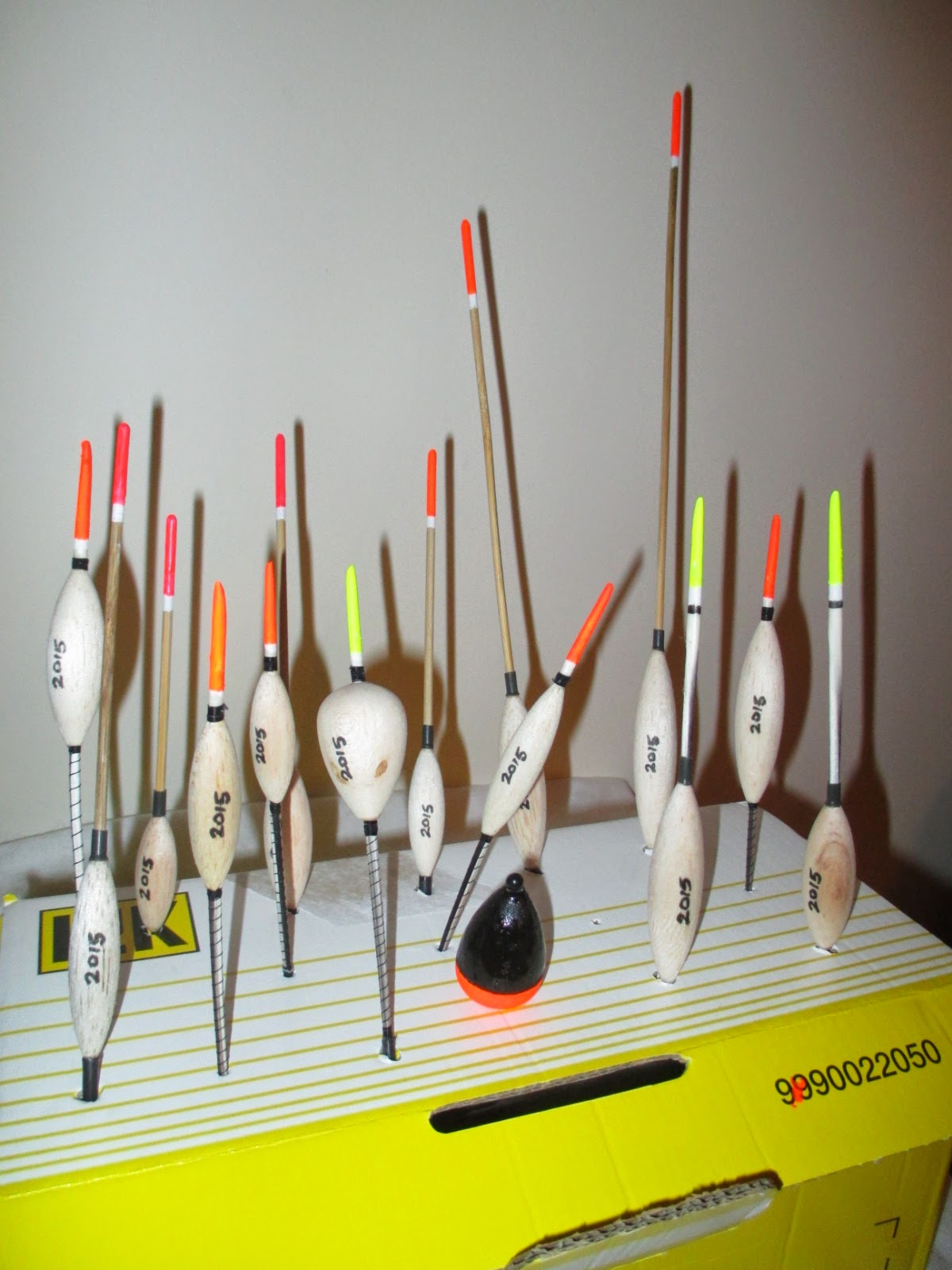 Apart from pike floats and controllers, I only ever use my own floats now. I'm sure the shop bought articles provide greater flexibility and more of a range, but there's nothing better than using a home-made version where every one is unique and built with quality in mind. They also work out cheaper.

Fishing related presents were thin on the ground this year, but one product I received was the Wychwood Solace Bucket Tool Station. 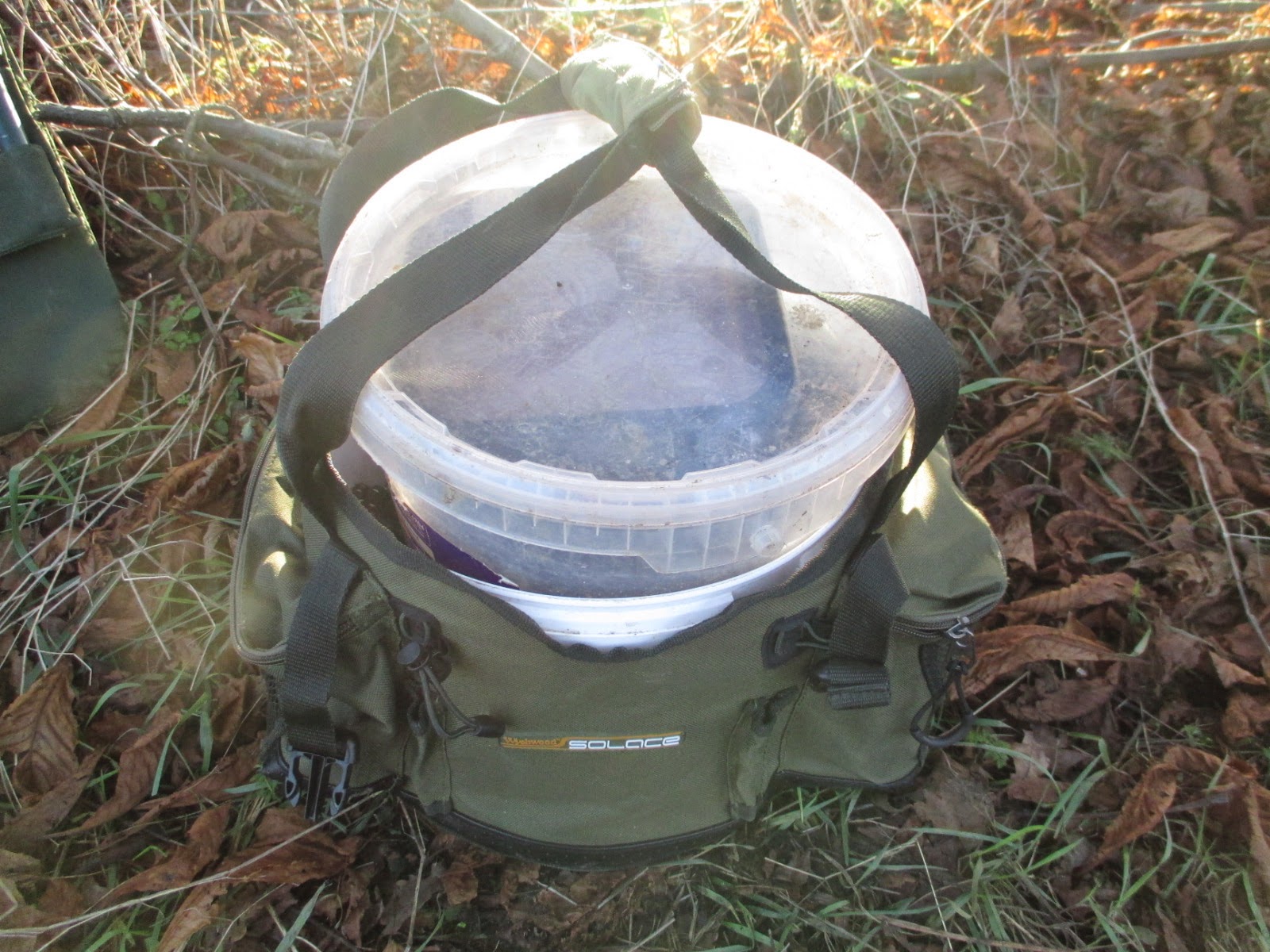 Thanks to Mick Newey for highlighting it in one his past posts. With the handy outer pockets, it's bang on what I needed. I detached the seat cover from mine as I don't really need it.

As I write this, the rivers are now full of cold water again. Hopefully things will settle down during the week and will allow for some decent fishing by next weekend.
Posted by Sean at 10:44 5 comments: