The Hat is Back!

A sharp reduction in temperature saw me delving deeper into the wardrobe this week to recover my winter gear. Colder weather usually brings one thing into focus for me - Pike. I don't need much of an excuse to get the predator gear out and the promise of a bit of frost and a brisk northerly wind made my decision easy.

I like short, sharp trips rather than long drawn out sessions in chilly conditions. My general rule is that when the coffee and soup run out, it's time to go home. That said, I'm known as a bit of a soup freak and my large food flask holds just over 3 tins of the stuff! It keeps me going for a while...

After clearing a small layer of ice from the car (which was registering 1 degree C), I made my way down to the Avon. Today was a morning session of just over 3 hours and for these swift sessions I like to turn up fully loaded to maximise my fishing time.

I have a couple of small telescopic rods that do the job admirably for short range river work. One was rigged up very simply with a couple of swan shot above the trace - this would be for the more mobile approach of wobbling/twitching deadbaits through the swim. The other one had a few more components but was simple enough - a sliding float, a trace, a small lead to anchor the deadbait, with some beads and a stop knot to make it all work smoothly. 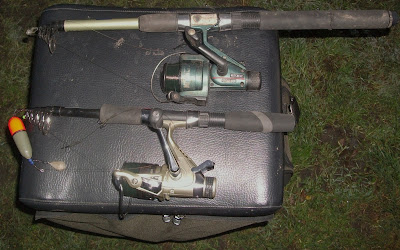 Another part of my Pike set up this year is the TFG seat box. I bought it while it was on offer last year and it's one of those frame type boxes with a canvas covering, which also comes with internal adjustable legs. It's perfect for the amount of gear I need to carry, is plenty light enough and comfortable too.

On to the fishing itself and I kicked off with a deadbait approach - Lamprey to be exact. I have a lot of faith in this bait due to the way it oozes blood into the swim. The first action came after about 30 minutes and was caught on my video camera:


Sadly, the Pike (assuming it was a Pike!) slipped away. It was one of those annoying bites which saw the float twitching for what felt like an age at time. I was waiting for the float to dip away slightly, but it just wouldn't move off the spot. I knew I had a fair sized bait on, but was conscious of not wanting to deep hook it. It's a tricky call sometimes. Maybe smaller baits are the way to go.

I persevered in that same swim and switched to the other rod, but the moving bait didn't get any takes or follows. With under 2 hours to go I moved to the next peg and went back on the deadbait. I avoided the blank courtesy of a single small fish that also had a liking for Lamprey - a smaller section of bait as it happened. 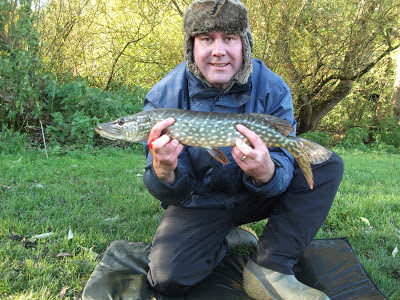 The eagle eyed amongst you will notice the bloody hand. I'm out of practice with my handling skills and this lively little chap caught me out!

I gave it a further go back on my original peg but nothing materialised. The blank was avoided though and I'll look forward to locking horns with the Avon Pike again soon.
Posted by Sean at 11:38 2 comments:

Prior to my last Wye trip, I had been trialling a compact handheld video camera on a couple of sessions. It was actually purchased for my wedding earlier in the year and hadn't seen the light of day since. So, I thought it deserved a trip down the Avon.

With the aid of my trusty little camera adaptor and an adjustable bankstick, I was in business. I'm only in the early stages of experimenting with the camera, but I thought I'd share a couple of my trial efforts.

Bream - 4lb 12oz - taken on a rising and coloured river. One of four Bream taken that day.

The action is on the right hand rod and the fish took bread flake on a straight lead fished close in. I know it sounds like there's a right old racket going on, but the noise you can hear is a pocket radio on a very low setting. It's just that it happened to be right by the camera.

As I didn't get a proper shot of the fish on the video, here's the photo (which appeared in the original post earlier in the month): 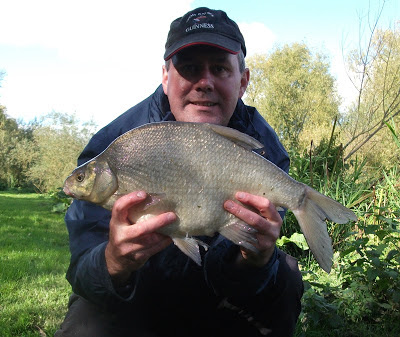 Jack Pike - taken on a Sprat deadbait retrieved enticingly through the swim.

It's my favourite and most productive method for catching Pike on the Avon. Perhaps not the best for  consistently selecting out the bigger fish, but I've taken them to just short of 16lb with this method, so it has its moments.

For anyone who thinks that my landing net was on the small side for Pike fishing, I do always have a larger net on standby. I just pick and choose the net to suit the size of fish.

Hopefully I've now managed to overcome a few permission issues with the video settings and that everyone can view the videos. If it's all successful I'll see if I can conjure up some better action when the mood takes me (and if the fish oblige at the right time!).
Posted by Sean at 15:01 4 comments:

Four of us headed off to the River Wye for the last ﻿time this year. Our trip coincided with a sudden influx of water which saw a 5ft rise over the previous 24 hour period. The river was still in good enough nick though and one advantage of the extra water is that the steep banks become less of a problem with the higher water levels.
﻿
﻿ 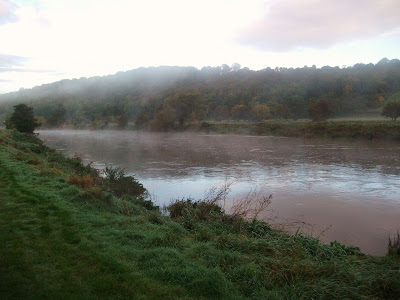 Brian soon settled into his peg and demonstrated the value of having a comfortable set up. The fish had to wait for their breakfast! 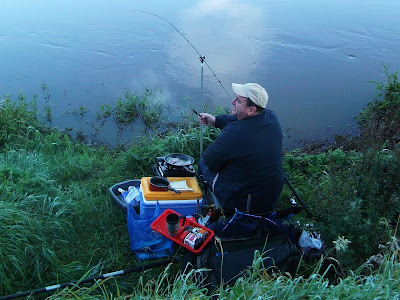 On what proved to be a tricky day for us, Charlie had the best fish - a Barbel of 7lb 11oz. 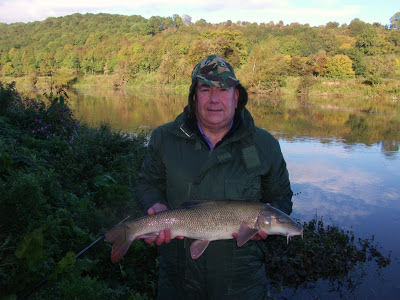 My only Barbel was much smaller at around four and a half pounds, but it saved me what looked like being a blank. 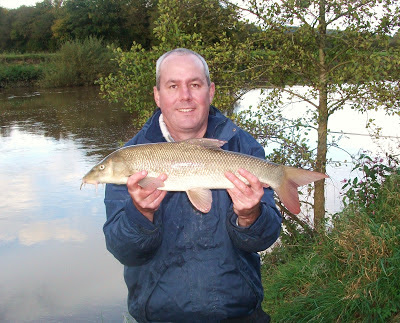 I was also looking after Mark, with the aim of helping him shed his Barbel virginity. He did connect  with a fish in the last hour, but he failed to land it. Brian blanked.

The next day saw us return in much colder conditions than we'd anticpated. Having cleared the ice from our vehicles, it was still barely above freezing on arrival. A beautiful day eventually emerged, although some of our party were struggling to appreciate its splendour. 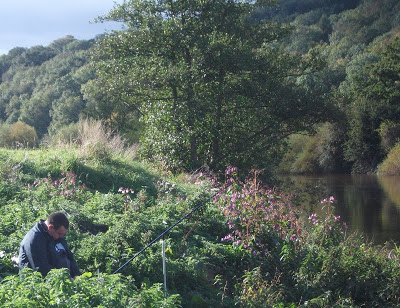 For me it turned into a gruelling blank in terms of Barbel. I spent an hour or so piling in maggots through a feeder in the hope of drawing some greedy Chub into the swim, but all I could attract was Dace. Charlie didn't fish much and instead devoted time to helping Mark catch his first Barbel from the banker peg much further downstream. The mission was accomplished late in the day when he caught a small Barbel of about 4lbs. Mark was rather happy, but sadly I wasn't near enough to get a photo.
The final word went to Brian who banked a cracking Barbel after I'd gone walkabouts in search of Pike on a lure. I got a text saying "I'm in" and despite being about 400 yards away, he'd still barely just got it in when I arrived back. It had given him a hell of a battle and he was claiming a double figure fish. I doubted it (always the pessimist!) on the basis that most Wye Barbel I've seen have been on the long, lean, athletic side.
How wrong I was though and when I lifted the scales they went further than I thought. It just slipped into double figures and I credited Brian with 10lb 3oz - a personal best and a decent fish for the Wye.
﻿ 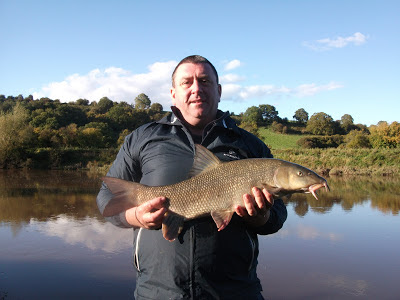 Although not a very productive trip for me, it was good to see a couple of our party achieve some personal milestones. We'll be back for more next year.
Posted by Sean at 13:25 1 comment:

Regular readers of this blog won't be surprised to learn that I was on the Avon at Alveston this week. I make no apologies for that though, as I'm really enjoying fishing there this year and making the most of the conditions.

Having seen it suffer badly with low clear water and excessive weed last year, it's been a breath of fresh air to see it in fine fettle this season. The big flush through we had during May, coupled with a few other decent rises in the water during the season, seem to have kept the river in good trim throughout.

I arrived to find the river nicely coloured and about 8 inches up. I settled for a peg that gave me a slacker area on the inside with 7ft+ of depth just beyond the rod tip. 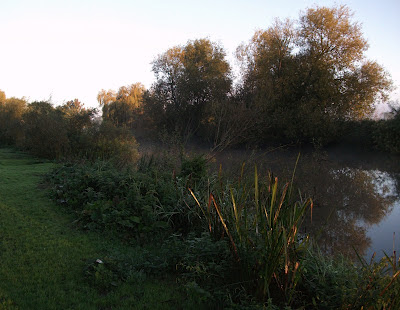 I dispensed with the softly softly approach to groundbaiting that I'd been taking in the past couple of weeks. Instead I balled in half a dozen cricket balls close in and compressed them well to make sure the bait got down to the deck quickly. I followed up with a few big baitdropper fulls of maggots, caster and hemp.

The first fish to show was a small Roach, but the next bite was something more solid and my first Bream of the day was landed. It weighed in at 4lb 5oz. Sorry about the poor self take! 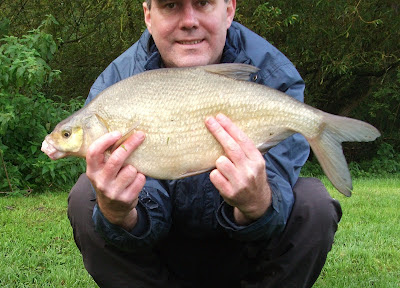 I didn't have to wait long to improve on the self take though, as the very next cast resulted in a better fish of 4lb 15oz. 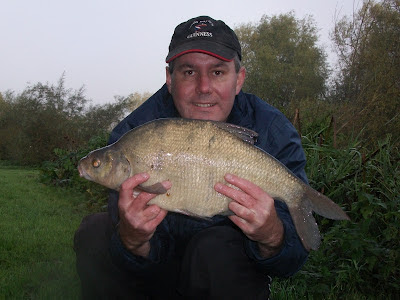 I started to wonder what the day might bring at this point, as I was still well inside the first hour and hadn't even started on my coffee yet! It didn't turn into a procession, but two more Bream were banked during the session. 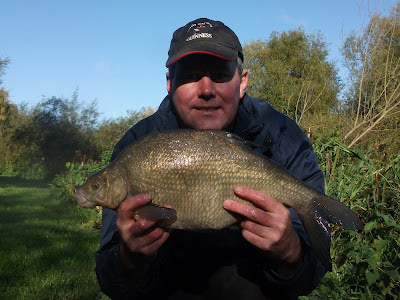 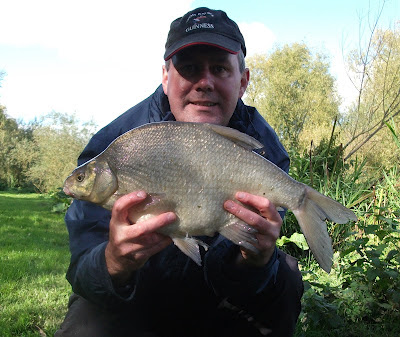 It was nice to be back amongst the Bream again, as I haven't had much luck with them recently. Another old friend turned up again too - the Eel, or more precisely 4 of them! Yet again with a bit of colour in the river, they seem to be on the feed during the day. All 4 were in the 12oz to 1lb range - very much the general stamp of Eel I've seen this season. Reports of their demise seem greatly exaggerated around these parts. I've seen more than ever this season. One of them was caught on bread flake, which is a first for me. 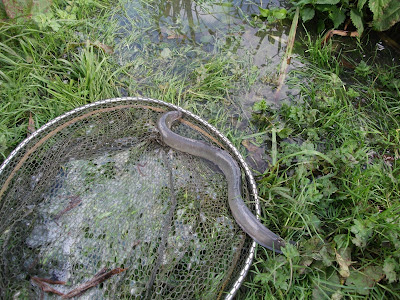 I also had a foulhooking encounter with a suspected Carp. I lifted the rod to retrieve my bait, but it just arched over and a fish powered off into mid river. The hook pulled after a few seconds and when I checked my tackle, I was left with the hook sporting a shiny thumbnail sized scale. 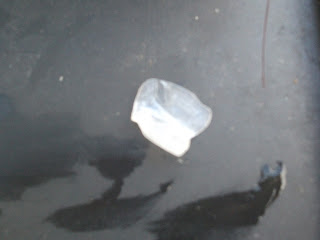 The river continued to rise throughout the session and my choice of peg proved to be a good one as it turned out. I'd very nearly plumped for a peg on the upstream wide section, but the platform I would have been fishing from was fully submerged by the time I was leaving. The water was just starting to creep over the bank around my peg too. 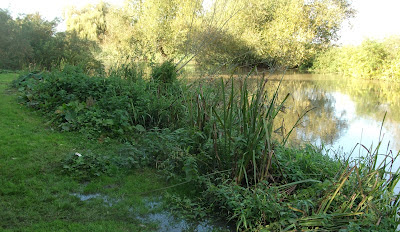 Bites were at a premium in the last hour or so and the debris in the water was increasing. With my feet getting ever closer to the water and ever colder, I called it a day mid afternoon. I'd had over 20lb of Bream and Eels, with a few bits (Roach, Dace, Gudgeon) thrown in. I went home quite content with my day's work.
Posted by Sean at 13:40 2 comments: