Fishing on Christmas Eve has become a bit of a tradition for me. My wife works a half day shift from home and that's my excuse to leave the building, returning for lunch. It frequently throws up some rough conditions though and today was no exception.

Although I wanted to explore more of the Upper Avon, it would have been crazy really. With storm Eva pushing through during the heart of the session, a muddy uneven river bank, high winds and ever increasing water levels was not a thrilling prospect.

I plumped for the easy option of the estate lake and its well manicured flat banks. Luckily the rain largely held off while I settled down and secured a brolly in place in anticipation of a battering. And then the heavens opened... 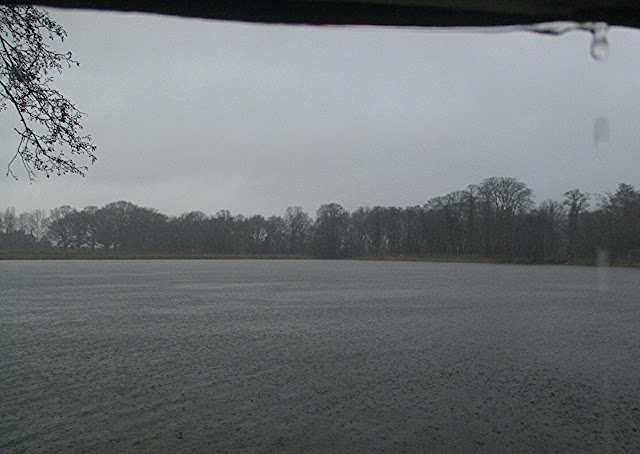 I sat it out on one rod with straight lead over a small amount of groundbait at about 25 to 30 yards. Alternating maggot and corn I scratched around for bites. They were hard to come by but I managed to winkle out half a dozen of the usual stamp roach for this venue. 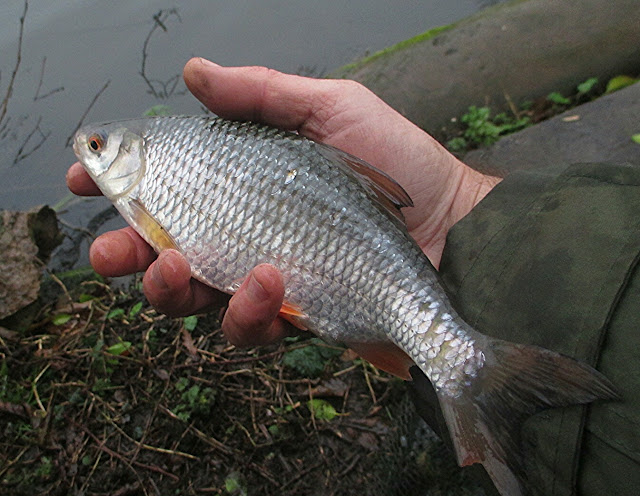 The last hour when conditions improved was actually the toughest for bites. It went colder though - down to 6C by lunch whereas it was 9C on arrival at 8am when there was a bit of cloud cover. 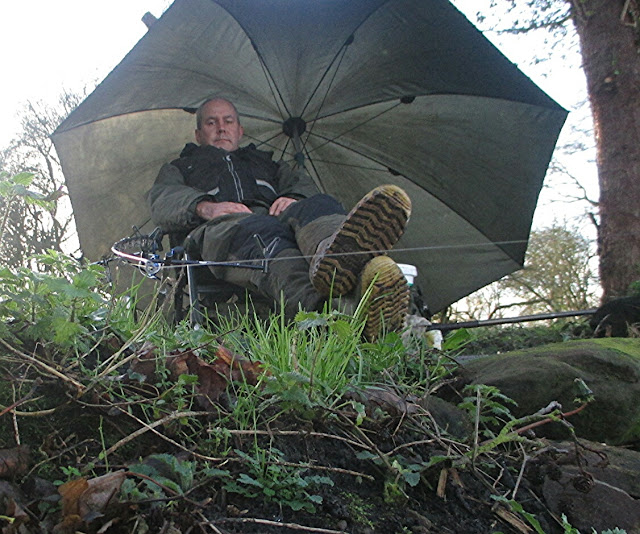 A bit of sport I guess and even with the poor weather, it beat working. I hope to get out again before the end of the year, but it's looking doubtful for the river after today's rain and more on the way. Could be another pursuit of stillwater roach, but I must also remember my pike gear next time. I have no idea what it might hold, but there's no harm in deploying a sleeper rod to check it out.

Have a great Christmas everyone.
Posted by Sean at 10:49 1 comment:

Well it's taken nearly six years to chalk up the two hundredth post. It's not always been easy to keep things going - blanks and struggles don't make for inspiring reading! But, the occasional times when things do go to plan, help to provide enough drive to keep forging on with this little project.

Project is perhaps overstating it a little though. It suggests there might be a grand plan, perhaps even a cunning one. Far from it! It's really just a diary and sharing it (while other bloggers do likewise) helps provide the motivation to keep it ticking over. Onwards to three hundred...

Since my last post I've acquired a late season ticket for a stretch of the Upper Avon. This is a stretch I first walked 25 years ago but had never joined. I have no idea why it took so long, given the number of clubs and syndicates I've been a member of during that time.

My first fishing trip to this eagerly anticipated venue was blighted by rain and a river carrying extra water. I'd covered all bases, which equates to me taking the everything, including kitchen sink. A long old trudge through a sodden field with patches of mud saw me eventually settle on a sheltered swim.

With little knowledge of the pegs, the main clincher was comfort and the ability to get an umbrella in place and pegged down. In doing that I largely sacrificed my barbel chances, but I still fancied it for anything else, particularly pike.

I alternated between maggot feeder and deadbaits and it was tough going. Just a couple of ruffe came to the maggots, but I did sneak out a couple of jacks to deadbaits.

A pretty wet and miserable start really and it was capped off when an angler a few pegs downstream reported having three barbel from a peg I'd passed up.

With unseasonably mild temperatures throughout the following week, I had no hesitation in going for the barbel next time. That's something I didn't think I'd say as we approach the shortest day of the year. I opted for a known hotspot and fed two areas with a groundbait laced with hemp and pellet. I left it for half an hour while pike taunted me. 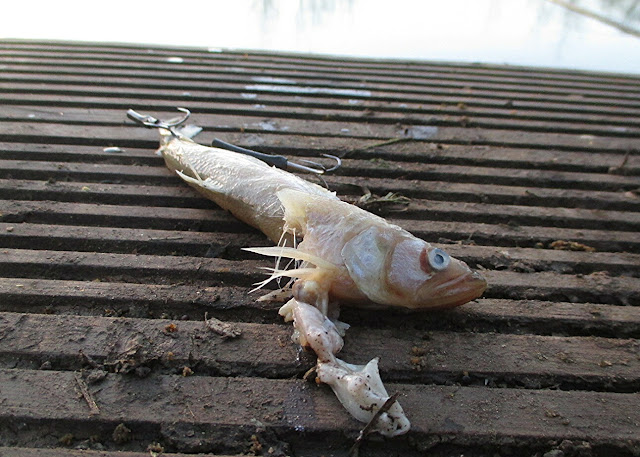 In fact the pike completely got the better of me all session. I'd chucked a small pack of four smelts into my bucket as a back up. I tried them at various intervals and managed to connect with three pike, but all slipped the hook. One of those days... 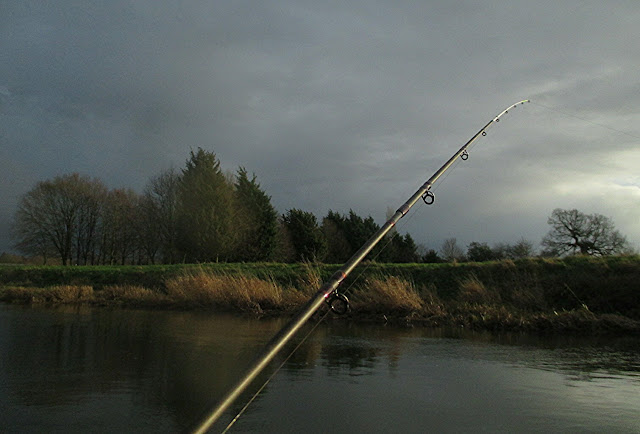 The main attack was maggots to the left, pellet / meat to the right. First bite was a vicious take on the maggot rig that screamed chub. I was about to net the spirited rubber lipped culprit when it turned into a roach! A decent one too at 1lb 2oz and a pristine example to boot. 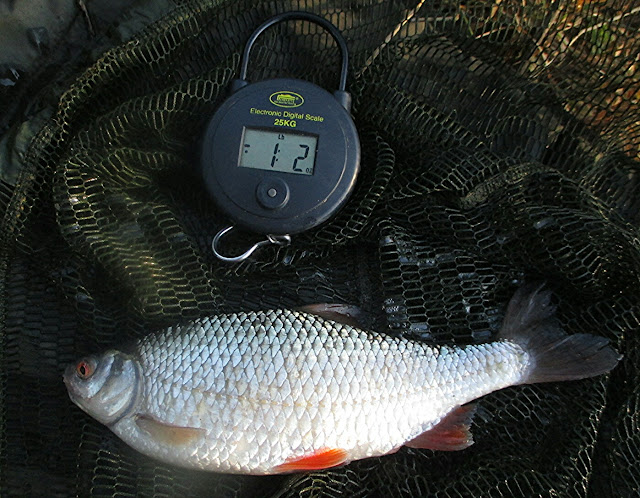 The pellet rod came into play soon after and I'm pleased to report that unlike my October Wye debacle, this time I was conscious enough to apprehend a crunching take. I was actually a little unsure how my TFG All Rounder rod would cope with a barbel, but it did the job quite nicely. After a solid but comfortable battle, it popped into the net first time.

It was a good fish but I didn't think it would be a pb or my first double. And so it proved. Ignore the scales in the picture as they include the net. The final verdict was 9lb 4oz. 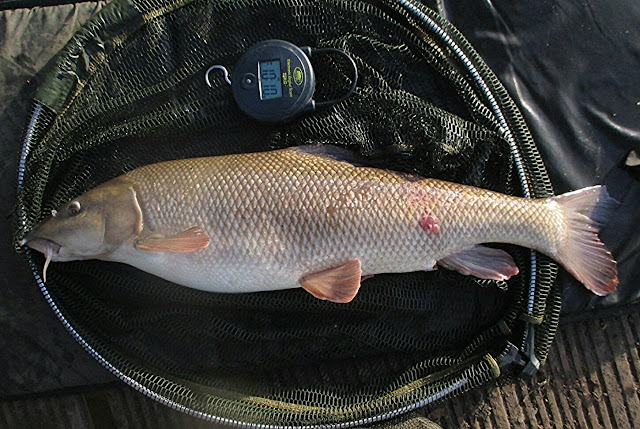 Just a further perch to the maggot rig and that was it for the day. I took the chance to walk some of the pegs further downstream and there's many more enticing swims for other days. Early impressions are good and there's still lots more to explore.
Posted by Sean at 14:14 6 comments:

Not in the immediate future it seems. Apart from a single chilly weekend a couple of weeks ago, we've had a very mild, if breezy, time of things recently. The local rivers have received a dose of extra water, but we've avoided the deluge that has decimated some northern areas.

It's been quiet for me of late. Just a couple of jacks from a previous pike session is all I need to say to bring you up to date from past weeks. 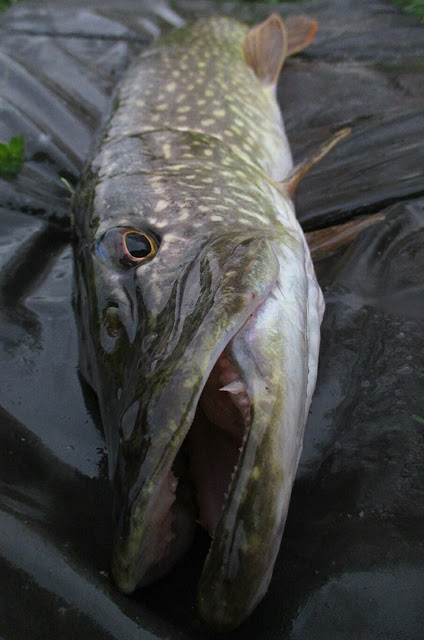 Over the last week I'd been a little bunged up and I contemplated giving the fishing a miss. But, I figured that the fresh air would help and I decided to give it a go.

With temperatures on the mild side and the rivers likely to be pushing a little harder than normal, I settled for a return to the estate lake. I really wasn't sure how this shallow water would react at this time if year. 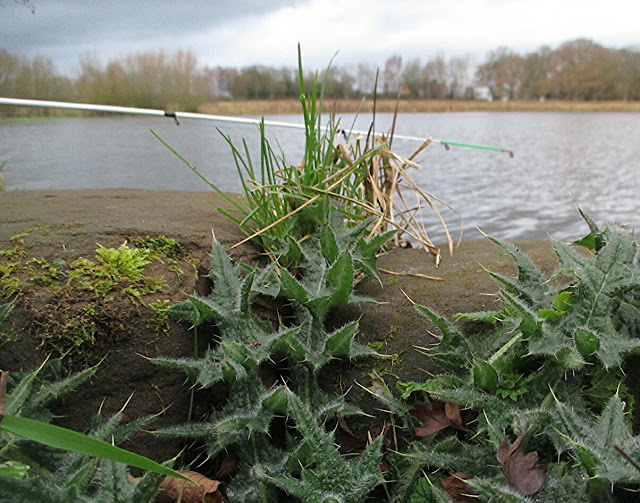 Tethering a brolly down to keep out the wind, I settled in for a four hour stint. Patience was rewarded with a consistent run of bites from the resident roach. Most were peas in a pod fish of around 5oz, with the odd better one stretching up to 10oz. A solitary rudd broke the monotony. 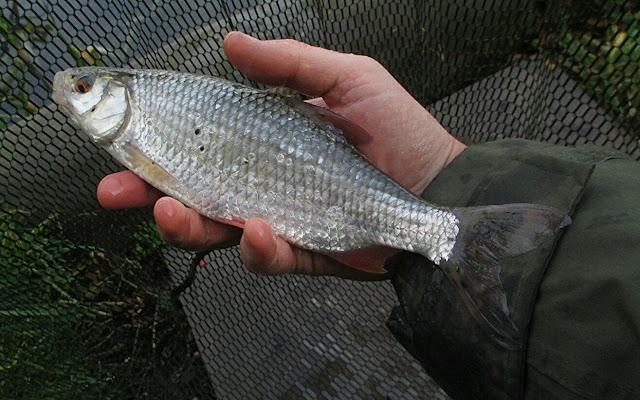 The larger samples (if they even exist here) continue to prove elusive. Still plenty of time though before my time on the lake is up and it's next closed season when I'll be really giving it some stick. 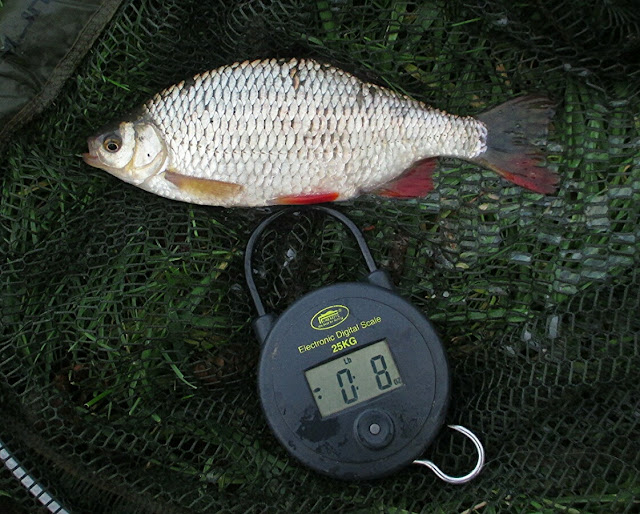 There was an odd sight in the nearby orchard. Amongst a whole selection of completely barren fruit trees was a single tree still clinging on to a huge crop of quite pristine apples that seem intent on defying gravity. 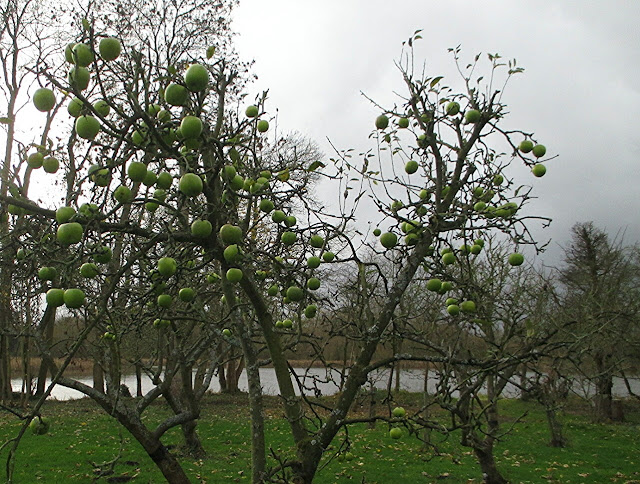 Like a kid in a sweet shop who can't help but be tempted, I've taken the plunge with another cut price club ticket for the winter period. I have walked much of the venue previously, but in fairness it was about 25 years ago. It should give me better options for chub and barbel than I have on my other tickets, but if anyone can screw up a good thing, I can!