February has proved to be tough so far - damn tough actually. The weather has certainly played its part. All over the shop really, but that's winter I guess.

Three sessions to catch up on. The first a bitter cold afternoon with a wind to cut you in two. Bumping into Danny at the fishery entrance, I was keen to hear something favourable from his exploits. No such luck! Predators not showing. Not good when that's all you've come for.

Still, I always like to be optimistic and I was beyond the point of no return really. A full on slop fest across the meadow and I opted for the most sheltered peg in my preferred area. An umbrella for a wind break helped to keep some of the chill off me.

A canoeist appeared just before I dropped in my first rig for a depth check. A quick adjustment and back in for a second check a little further out. Looked OK so I reeled in and it fought back.

Hang on - I hadn't baited the hook! It took me by surprise. The fish were supposed to be scarce afier all - not crawling up my rod!

Only a jack and hooked just above the eye. I was using a large single hook for zander and most likely just dropped it plumb above the fish and foul hooked on the retrieve. Judging by the number of leeches, it had been pretty dormant. 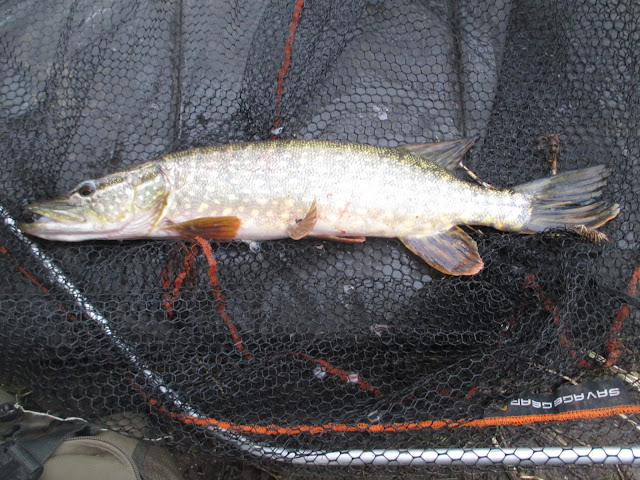 And that was it. With baited hooks, not a single bite to speak of. A pretty miserable afternoon in all honesty. An annoying off road biker (with incredibly noisy bike) was in the fields behind me at various times. Guns were going off constantly too. Not really a peaceful affair. 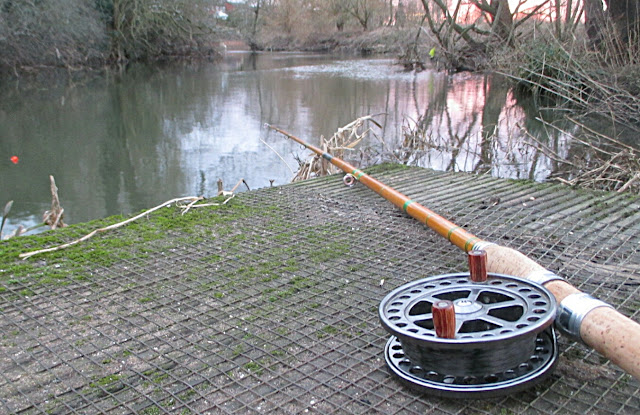 No kingfishers either, but a mink popped through my swim and a ridiculously friendly yellow wagtail seemed to take a liking to my free offerings. The trudge back to the car left me freezing cold. Definitely the toughest conditions I'd faced over the winter.

A week later it was more Sunday action. I wasn't even sure I'd bother, but my wife pretty much kicked me out! She knows what I'm like if I don't get out and after a long old week beforehand, I needed a release. Decorating doesn't deliver that!

Back for more predators, but with an each way gamble for chub. Umbrella straight into position again to reduce the wind chill.

A slow start, but some interest on the downstream smelt rig saw a jack attached. Blank avoided I thought, but it spat the hook as I was getting the net ready.

A move a couple of pegs upstream didn't yield anything and the wind was getting gusty, colder and annoying. Checking out a longstanding trusty peg further upstream, it was almost tranquil. Time for another move.

Returning to gather my gear I looked downstream and I thought I could see smoke. Hang on. A pitch black sky and I can hear the noise increasing. Hailstorm! Time to take cover. 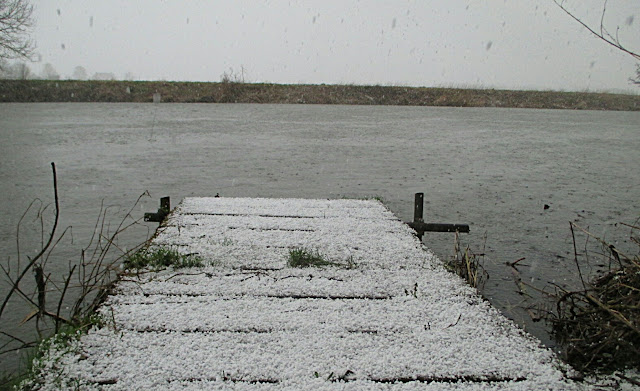 Just the wrong moment to move, but it didn't matter in all honesty though - the hail just bounced off and I remained dry enough.

The move triggered a take though and a feisty 8lb fish became my first hail pike. Not quite the same as snow pike though - most of it had melted! 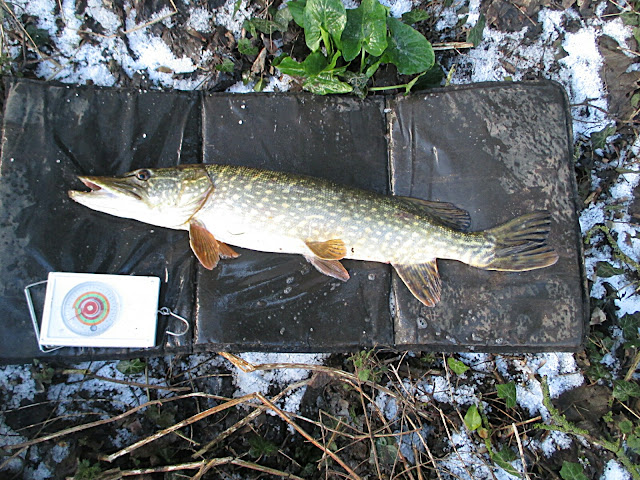 And that was it for the day. I retraced my steps and tried for chub again into dark, but with no luck. 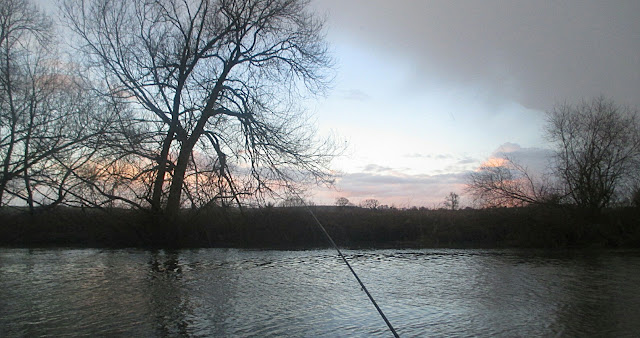 On to the weekend just gone and my Sunday afternoon plans were scuppered. My wife requested my presence for a family meal. Refusal is rarely a wise choice, so I kept the peace. A small window of opportunity was available on Saturday afternoon, so I had to grab it.

I'd arranged to meet up with Martin down the Avon, but he was worryingly silent. Sure enough the text came through gone midday as I was getting ready to leave. He was blanking. Another gruelling session on the cards.

Still blanking when I got there, he was cerainly giving it a good go. He had a section well stitched up with baits, but the pike weren't having it.

I tried a couple of banker pegs with smelt, sardine and lamprey. Plenty of twitching, but nothing happening. Hopes of an extension into dusk and dark were thwarted by the missus. I had to call time and meet her at the station. A bit like a referee stopping the boxing match and sparing the contender from further punishment.

Blanker Martin had dropped in just downstream and turned into bagger Martin! Several biteless hours ended with a brace in the last 15 minutes. The first a jack, but the second a low double to salvage some respectability from a difficult day. 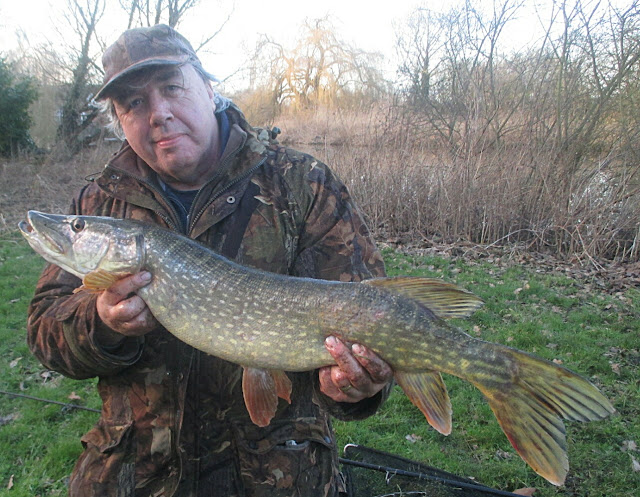 Cold weather seems to be all the talk now - the beast from the east if we're to believe the hype. Got to make the best of it I guess. There's not enough season left to be picky. As long as it's settled I'll take it. Still a few things to try to tick off in the next 3 weeks. Two sessions on the cards this weekend hopefully...
Posted by Sean at 13:18 1 comment: