With lots going on in my daily life and fishing life, I've neglected the blog for quite some time. I started putting some notes down several weeks ago, but could never quite pull it together for a post. A case of writer's constipation I guess!

I contemplated stopping altogether, but I know I'd regret that in years to come. The blog is primarily a point of reference for me personally and I don't want to lose that.  So, with renewed vigour as we move into Autumn, I'll attempt to kick-start it off again and try to be more regular again future.

The summer has whizzed by for me. It will certainly linger in the memory for the long hot dry spell we suffered. Fishing conditions weren't exactly great for much of it, but I've still had my share of trips. 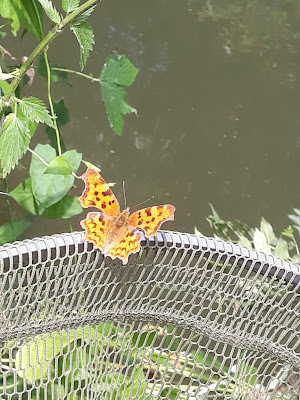 My best laid plans were somewhat disrupted  (in a good way) when George Burton's syndicate got off the ground. Suddenly I found myself with a whole new load of options to go at and I've been busy getting myself acquainted with them.

For me they're mostly new venues, but with one old venue that I last fished 20+ years ago. The real fun in this venture though, is the unknown. Joining something established often brings a degree of predictability with it. This is completely different. Not quite a blind punt - more of a calculated one - but with plenty of uncharted territory and lots of opportunity for discovery along the way.

Most of the summer has been spent just keeping it simple. I wanted to get back to trotting a float more regularly - something I've neglected a lot in recent years. I acquired a late 1960s Bruce & Walker float rod earlier in the year and it has been put to good use on many occasions.

Rather than trying to recount individual sessions, I'll get up to date by sharing some photos from my travels across four counties, five rivers and a couple of stillwaters.


And finally a tale of two Marks, both returning to fishing after long absences.


The setting was a Herefordshire estate lake and I was helping Mark to rediscover the joys of float fishing.

As we moved into the afternoon his reel suffered what we both agreed was a terminal demise and I set him up with one of my spares. While retackling I also suggested a change of float to something heavier, to allow him to make longer casts. With the depth plumbed I attached some shot and asked Mark to flick it out to check the lie of the float.

Out it went, but as he retrieved it I saw the rod seriously arch over. Caught on the bottom I presumed, but it quickly became apparent he'd got a fish on, as the rod tip started lunging. With Mark never having caught anything beyond 3lb before, I assumed my best Corporal Jones (Dad’s Army) impression. “Don't panic, don't panic!”.

Managing to quash Mark's initial natural instinct to reel like mad, he then played the rest of the battle out perfectly. On light gear we managed to coax a pike of 9lb into the net. Presumably it saw the flash of the hook and struck out at it. Luckily the hooklength held out by the slenderest of margins - breaking under minimal pressure when tested afterwards.

It made his weekend - even if he was a little reluctant to handle it! 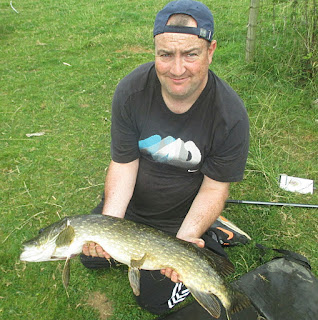 The Avon this time and another Mark returning to fishing. We'd talked during the journey and established he'd never caught a pike. I predicted it might change soon.

He started off trotting maggots under a stick float and given the swim choice, I knew the inevitable would happen soon enough. First strike and his rod arched over. “It’s a decent one” he shouts. I'm hoping chub, but already thinking pike - and so it was. Nearly landed, but it let go at the last.

It took a couple more encounters later in the session before he got lucky and the hook lodged in the scissors of a fish. Expertly played I might add, Mark carefully guided his first pike into the net. Less than 5lbs, but good fun on light gear and we had the happiest angler ever to guest on this blog! 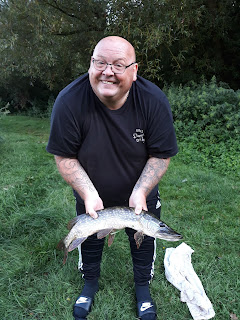 I hope I find the pike this easy when I start targeting them! Great to see others enjoying themselves though - often more rewarding than our own exploits.
Posted by Sean at 15:15 2 comments: