Saturday rolled around again and it was time to end the drought. Both Brian and I had a few things to sort out, so it was a delayed start which curtailed the session into an afternoon one only.

I was less than impressed by the tempertature again though - a mere -1C while I was doing the rounds in the morning and it was barely above freezing when we set out. We had hoped to fish one of the local ponds, but the ones near me were frozen up, so it had to be a river.

We headed out to the south side of the city and I suggested taking a look at a section of the Avon near to Middlemarch Business Park. We parked up and took a short walk across the scrub land and found a very fishy looking bend with enough depth to entice us into having a go. It was either that, or 15 mile drive to the usual areas we fish and with time against us, we went for it. 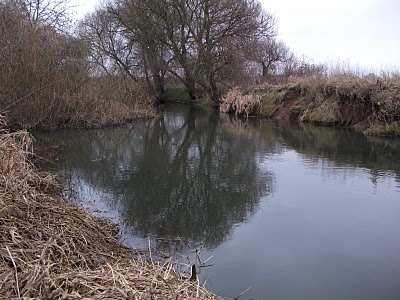 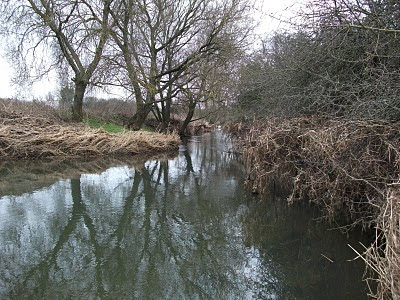 Light feeder / bomb set ups were deployed and even the Pike rods came out for a while. You know where this is going don't you? Yes, we blanked again and in royal fashion. I went on the move for the last hour or so and found another cracking looking run not far from the hotel, but it didn't deliver either.

January has come and gone and I'm stuck on a blank. I thought it only fitting that the blog should be renamed for a while, in honour of this non contact (with fish) pastime I am participating in! I'm still upbeat though and given some better conditions, things will improve I'm sure. On a positive note I'm no further behind than I was at this time last year!

I had a bit of a recce on the Sunday and I've eyed up a couple of interesting new spots on both rivers and ponds. I have a couple of others I want to visit during the week if I can sneak out of work early one day. I'm sure I can blank on them all given the chance!
Posted by Sean at 10:11 4 comments:

With Brian busy with business duties, I took on the seemingly fickle Avon on my own this week. It was a bit of a rush job though. I had to be back home by 12-30 to provide a taxi service for Mads, who was having an afternoon meal and booze up with the girls.

I needed to be on the bank shortly after first light to give myself a reasonable shot at it. I was pleased to see my car free of ice when I was loading up just gone 7am. The temperature was 1C when I set off, rose to 2C as I skirted through the city, but dipped back to -1C on arrival at Alveston at 7-45.

I went for the upstream end peg, which is a totally new one for me. Looking upstream: 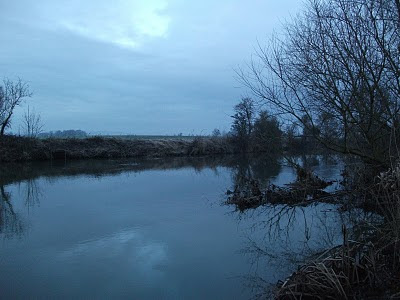 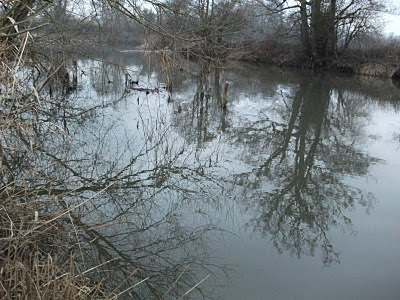 The peg didn't produce though, despite it looking very fishy with the overhanging features on the near bank. I moved a few pegs downstream to tackle the wider section by a big bend, where I could chuck a feeder into a far bank slack.

I chucked feeder after feeder and I all got as a reward was a single bite that I duly missed. One burst maggot represents some progress I guess! 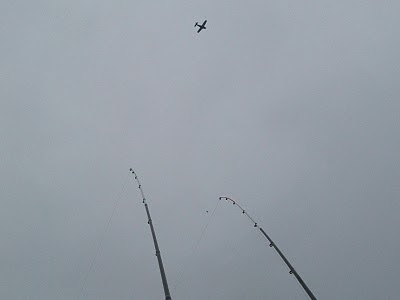 That's now 3 blanks on the spin, although I've probably only spent 10 hours on the bank across them all. I'm remaining positive though and something has to happen soon (please!).
Posted by Sean at 13:16 1 comment:

Q - What have I got in common with Coventry City right now?
A - We've both scored blanks in 4 of our last 8 outings!

Yes, another blank at the weekend at College Pool. It turned into a fairly brief session with Brian, which neither of us really enjoyed. The wind was blowing a gale and and it wasn't pleasant.

I'd hoped the Bream might play ball, but it wasn't to be. I dare say if I'd have scratched around in the margins, I might have got off the mark, but I'm trying to avoid desperation tactics at this stage. Another angler was doing just that and had 5 small Roach on pinkies.

Maybe January just isn't my month - I blanked on both January visits last year! The river levels are looking a lot healthier now and for the week ahead and we seem to be promised some very settled weather, if slightly cooler and more normal for the time of year.

I can't recall the last time I had three consecutive blanks, but it's very much on the cards right now. Expect a few expletives in my next post if it happens!

No photos this week - I just couldn't summon up the enthusiasm.
Posted by Sean at 14:13 2 comments:

The first session of the year brought about fresh enthusiasm with the onset of the bloggers challenge. At 7-10am, my last moments of beauty sleep were interrupted by the mobile going off. Brian kindly informed me it was chucking it down outside and so the session was put back half an hour or so. Back to sleep for me then!

By 8-30 the rain had gone through and I'd joined up with Brian down the cut. After hearing of Jeff's 15lb+ Pike the other week, the choice of spots was simple - down to the marina entrance. I set up a Pike rod and chucked out a deadbait. I also set up a feeder for a maggot approach, but I don't know why and it didn't last long before I opted for a two pronged Pike attack.

To cut to the chase, neither of us had a sniff and after a few hours we decided to try the opposite side of the road bridge, negotiating the rather chilled out swans on the way. 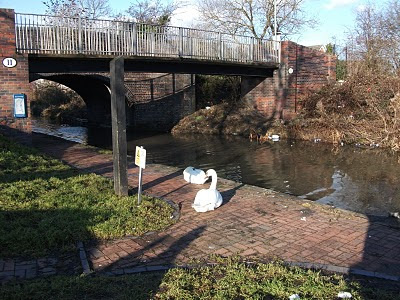 Things were certainly different along this stretch and large parts of it were still suffering from slabs of ice. Of all the places I fish, I think this one wins the least desirable award - here's a delightful shot of my M6 swim: 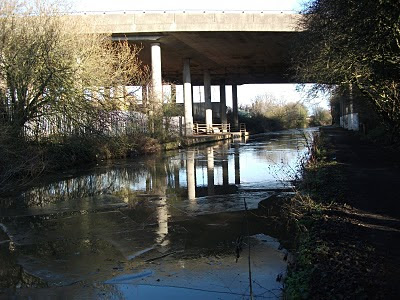 Upstream is marginally better looking. Is it me or does the forlorn figure standing by the canal appear to be contemplating throwing himself in! By this time I felt like joining him I think. 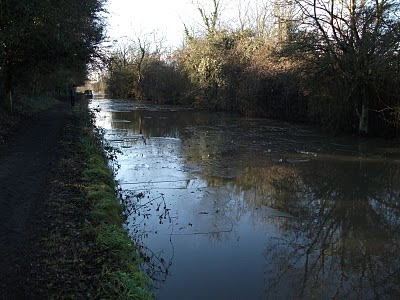 We moved from swim to swim and I left a static deadbait out in each, while wobbling a deadbait through on the other rod. I never had the slightest touch all session. Brian wasn't quite as adept as I was at avoiding bites and he did end up with a chunk out of a deadbait. Over a beer that evening it was suggested that the bite marks in the deadbait, might actually have been human teethmarks! Brian firmly denies such slanderous talk.

So, blankety blank to kick the year off. Simple arithmetic: catch bugger all = 0% - simples! No need for spreadsheets. Memo to Keith - next year don't worry about giving me read-write access to the sheet until at least the 3rd week of February!

Not what the doctor ordered, but there's a long old road ahead. Plans are being drawn up for the assault on the challenge, to the point that camping gear is now coming into the equation and I'm also researching Catfish opportunities - something I didn't think I'd be doing! They are closer to home than I'd imagined though.