Sticking to a Plan

It was another glorious weekend of weather. I fished on the Saturday and the overnight temperature had remained high for the time of year. It was 10C when I left home just around 7am and rose up to 15C when I packed in early afternoon.

I stuck to a plan I'd hatched when packing up the week before. As I mentioned in my last post, I knew I'd had too many things on the go and the end result was pretty poor. This week I was returning to the same swim and would fish it with one rod only.

The river was a shade down on last week and a good deal clearer. Fish were showing though and with the favourable weather, I was confident. The moon was still visible on arrival and the river was as tranquil as ever. 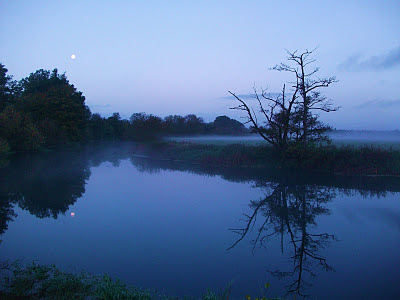 I set up the wand rod and decided to plunder a back eddy to the inside right of my swim. It had produced most of the action the previous week and more importantly, it was fairly weed free. I decided to play the numbers game of fishing with small baits. I knew I would attract the Dace, but I was hoping that bigger fish would eventually move in over the bed of bait I'd introduced early doors. It consisted of a bread crumb & crushed hemp/halibut mix, with a handful of casters.

I soon had some company to deal with, in the shape of an inquisitive bull. He was no trouble though. 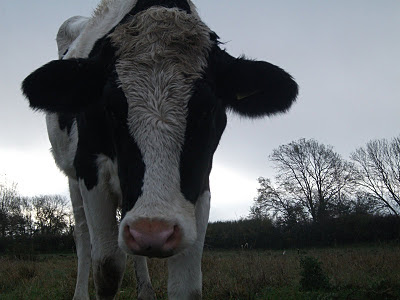 Others soon followed and one of the cows was quite an imposing looking beast - albeit still pretty docile! 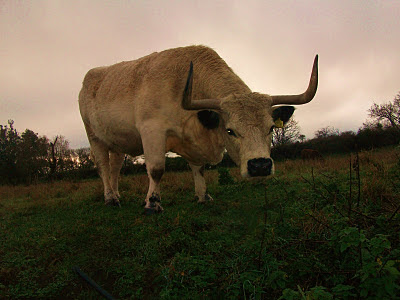 The Dace were there from the off and I started to catch them regularly. A change to double caster slowed things down a little, before the rod tip arched round and held solid. This was no Dace! I could see in the clear water that it was a decent Chub and I carefully played it out on the lightish gear. It popped straight into the net with minimum fuss as it happened and I knew it had a squeak of being a pb, as it was a broad fish. I slipped it on to the scales and it went 4lb 5oz - a new pb for me by 3 ozs and a 4th pb of the year. 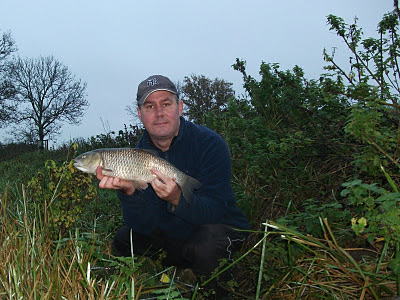 Nothing else beyond Dace showed up and I decided to have the last hour or so on a different swim that was nestled between a couple of overhanging willows. It was a little slower, but again it produced Dace after a bit of feed had gone in. One further Chub put in an appearance, but it was a much smaller sample around the pound mark.
Posted by Sean at 09:16 1 comment:

Well, the heavens finally opened up quite a bit towards the back end of last week. As ever, I found myself tuning into the river levels site to view the extent of the damage and I half expected to be facing a river that would be lapping over the platforms come Sunday. How wrong I was. The extra water had seemingly vanished into thin air - or more likely absorbed by the bone dry ground.

At 3C on arrival it was a tad chillier than I'd experienced recently, but it was a beautiful morning and the first task was to capture a few shots of the mist rolling across a tranquil looking Avon. 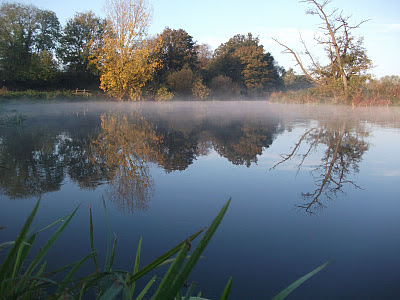 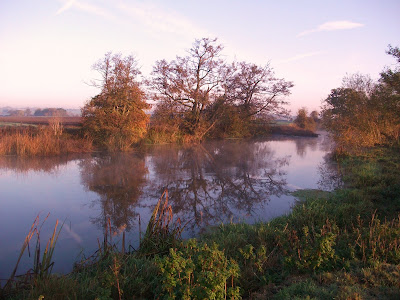 The rest of the day wasn't worth writing about! I had brought everything bar the kitchen sink with me and I proceeded to use most of it. I had promised myself a Chub session after last week, but I totally deviated from the plan and went for trying a new swim with my experimental head on.

Two Avon rods, a wand, a pike rod and a stick float set up later (not all at the same time I hasten to add!) and all I could catch was Dace. I'm actually becoming quite a Dace attractor these days and I had plenty of action from the little critters on maggots, caster and bread. Not a Chub in sight. Considering how many Dace were about, the Pike were once again conspicuous by their absence.

The only passer by I saw all day was mooching on by as I was packing up and he remarked on the amount of gear I'd got set up. I told him that it was a case of plenty of gear and no idea!

Next time I will scale things back and some of the rods are staying at home. I also think I need to step back to one rod only at a time and concentrate on getting everything right. I know I'm spending too much time fishing two rods at a time very averagely, whereas one rod fished half decently might actually see improved results.
Posted by Sean at 12:42 1 comment: