That's the message I'm going to have to drum into myself after my latest Avon flop. I had high hopes this week with the river 4 some inches lower and looking in very good nick. I had a little less choice of pegs this week, with 4 other club members trying their luck too. I settled for peg 4 where I'd had a few small Perch the week before and is a peg that has produced them to over 3lb in the past (not to me though!) 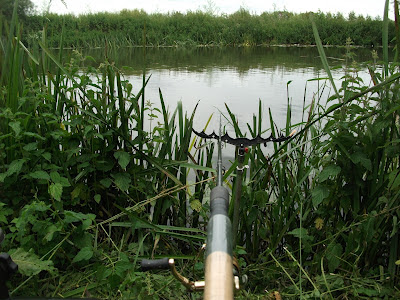 I fished two rods, both on a straight lead set up - one for alternating smaller baits like bunches of maggots, caster or a piece of corn on a size 15, while the other had a lump of bread flake on a size 10. I was fishing a nice slack area about 7-8ft deep just off the main flow. I felt it was bang on for Bream, Tench or Carp.

Bites were hard to come by but my account was opened up with a Perch of 1lb 1oz. 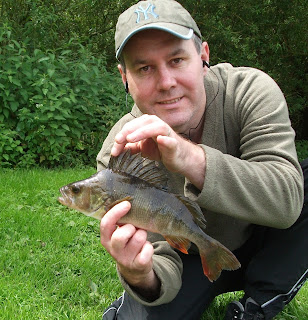 It didn't take off from there though and things just got harder and harder. Being honest, I'd had a delayed start and wasn't on the bank fishing until 11-30 and I had to be away by about 5-00. They aren't the best hours to be on the bank at this time of year, but sometimes you just have to give it a go.

I had a mess around with a float rig for a short while but it didn't alter my fortunes - just the odd small Dace and Chublet. It wasn't until the last hour that my bread rig started to show some signs of action. My first bite on that set up wasn't what I was hoping for though - a Roach of only 4oz or so that had managed to throw itself on the hook. 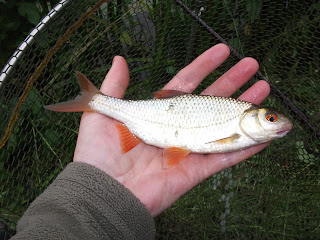 I then had a frustrating end to the session where I kept getting lots of little taps on the rod tip, but nothing really positive. I assume it was more small Roach pecking at the large piece of bread flake.

I'll have to rethink my tactics for next time, but I will be avoiding the own goal of forgetting to bring worms. I'll also be on the bank at a much better time of day. I'm sure there's some decent fish just around the corner...
Posted by Sean at 13:11 1 comment:

June 16th dawned and I wasn't even sure if I was going to wet a line. With the weather forecast suggesting rain and a stiff breeze I'd decided that I'd give it a miss if conditions were poor. I got up at 5-30am and all was fine outside. The EA river levels site suggested that the river would 1ft+ up, so it was still in the right ball park. Game on!

The Avon at Alveston looks idyllic in the picture above, but you can't see the state of the banks. It doesn't take much to flood the middle section and a good few pegs that were recently renovated were out of commission.

I settled for peg 9 where I had nice access to a back eddy created by the extra water. There's lots of lily pads to get over though, so I had to fish from the platform. The water was about an inch below it when I started. Fish were topping all around, which is always encouraging.

After a quiet half an hour the fish became more obliging and I had about 15 from the peg in around 3 hours. There was nothing of any size, but plenty of variety with Roach, Chub, Dace, Bream and an Eel. 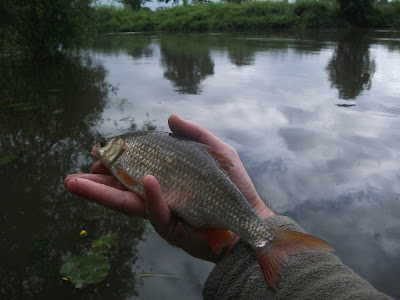 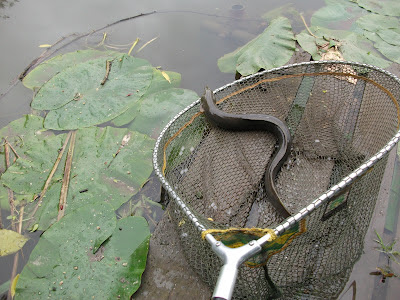 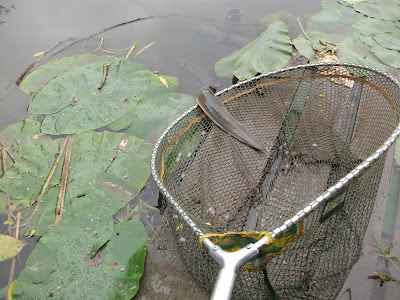 I then moved pegs, but the decision wasn't down to the fishing. It was simply that my feet were now sat in water - in fact the whole platform had now gone underwater. For safety's sake I decided it was best to get off while the going was good. 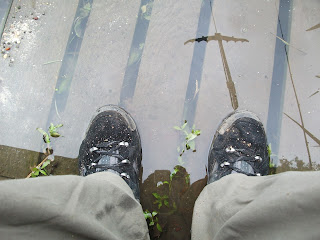 Other platforms were in a similar sorry state. 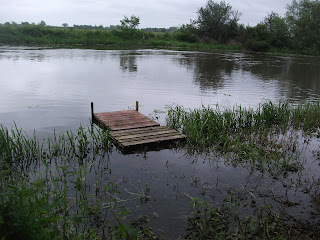 I headed downstream to peg 4 where it was easy to fish from the bank. I added some Perch to my tally and I lost something else on a sleeper rod that had bread on it. It wasn't anything big though. I could see the bad weather was closing in and I decided I wasn't going to take a soaking on this occasion. It's a long season and the fish will be there another day. I called time before midday and went home content with a pleasant morning's work  - and there wasn't another angler in sight!

The good news for the section is that the dense bottom weed that blighted it for the whole of last season (right through into the depths of winter) has finally gone. I'm guessing the floods a few weeks ago played a big part in flushing it out. It's opened things right up again and my confidence in this water has rocketed up. Is it misplaced - time will tell?!

Either way, I'm really looking forward to the river season ahead now. As I write this the levels are settling back down nicely and it should be more or less bang on right now. I hope it's playing ball at the weekend though.
Posted by Sean at 14:50 1 comment:

Not A Turtle Disaster

Back to Ryton this week for another half day session. Conditions weren't too bad - far better in fact than we had seen during the previous week. However, with the changeable conditions and faced with a blustery day, I was less confident on this occasion.

I intended to fish a float rod, but it was going to be much too hard work. My intended swim was also sat in the teeth of the wind and wasn't at all pleasant. I know fishing into the wind is generally the thing to do, but comfort ranks a shade higher on my list. I decided to fish the right hand peg on the sand bank, as it was benefitting from the relative shelter of the island. 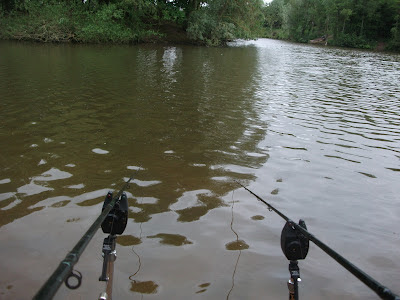 Bird life was strangely quiet around my peg, so I took the chance to sneak some bait in as soon as I could. I then rigged up a couple of straight lead set ups with bunches of maggots for bait.

The first bite was a tentative one and I almost didn't strike - believing it to be a line bite possibly. Curiosity got the better of me though and I lifted the rod, to find a rather dull fight. My eyes lit up for a while, thinking I'd got my first Ryton Bream. It all turned sour very quickly though, when I was faced with something altogether turtle-like and looking pretty cheesed off with me.

I'd heard reports of these Terrapins in the past, but had never come face to face with one before on the bank. They certainly have attitude and it was quite funny when I lowered the net on to the sand bank. I thought it would need some coaxing, but it casually sulked off back across the bank into the water - almost as though it was a regalar occurence.

I pressed on for something more fishy but it was a tough session. I ended up with three Tench to around 3lbs and three Perch. The best Perch might have been close on a pound - it was long enough to be well above that weight, but was the leanest one I'd seen in a long while. I was going to get a photo, but it performed some acrobatics and was back in the water. 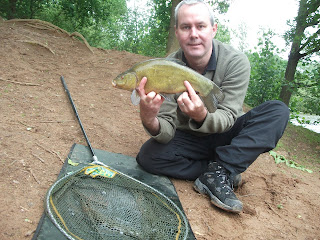 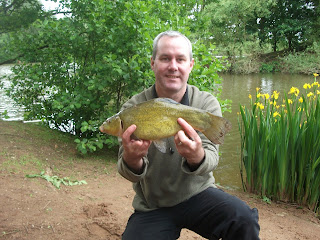 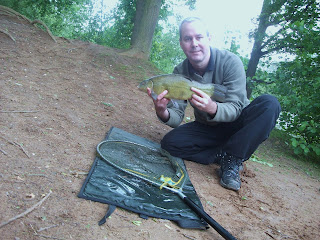 Back to the rivers next week, but it looks like we're destined to face them with a bit of water on. Hopefully they'll stay on the right side of things and we'll have a good opening weekend.
Posted by Sean at 12:27 1 comment:

A Spot of Tenching

Saturday saw me making a long overdue return to Ryton. It was now looking far greener than on my last visit and I sensed that it was going to play ball today judging by the fish I could see moving as I walked down the roadside bank. I wandered round the back of the pool to get off the beaten track and settled into the peg to the left of the sand bank. 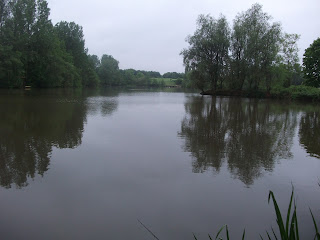 I decided to have a simple day with just one rod, float fishing for Tench or whatever else cared to show up. It's my favourite method of fishing for the Tench at Ryton. The swim was given a kickstart with 7 jaffa sized balls of groundbait loaded with hemp, caster and small pellets. 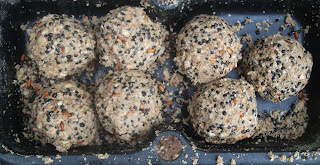 It took about an hour to really get things going, but I then had a fairly solid few hours with fish falling at regular intervals. I had 7 Tench in total, with 6 of them very much like peas in a pod at around 3lb each. 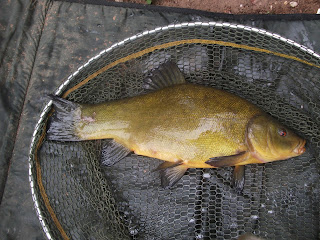 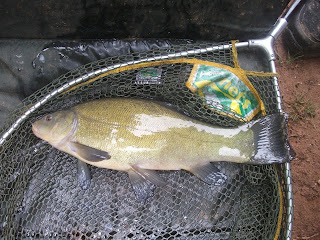 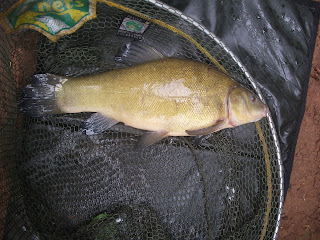 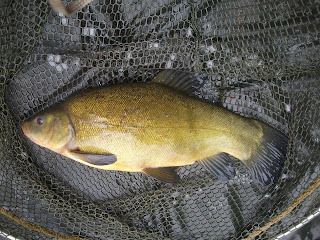 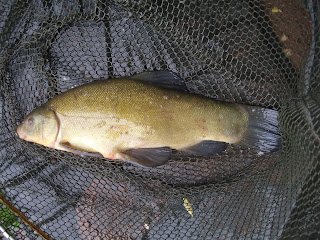 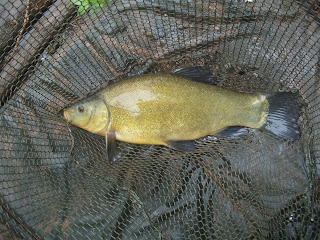 The only fish of a better stamp weighed in at 4lb 14oz. 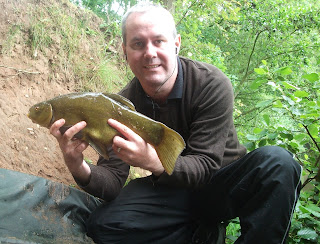 I had a few Rudd to 12oz along with a small Carp and a solitary Perch. 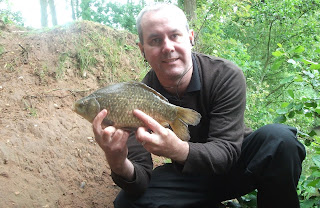 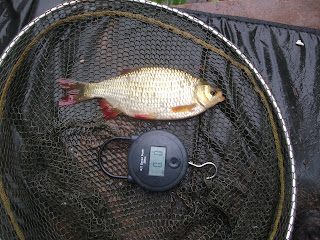 As the session wore on, I was actually plagued by tiny Rudd and it became impossible to fish maggot or caster, as the bait wouldn't reach the deck before being nailed. I had to revert to bread flake to avoid the attentions of the small Rudd and it proved to be quite effective. I'm not moaning though, as it's encouraging to see so many silver fish at Ryton. It's a credit to those within club who have set about improving the variety of sport on offer.

I total I had somewhere between 25-30lb of fish, which made for a nice bit of sport. It was a shame I had to leave when I did, as the fish were still clearly rooting around in the swim judging by the bubbles I could see.

I bumped into Barry the Fly as I was leaving. He's now doing some bailiff work down there and it was refeshing to be challenged to produce my ticket. He explained that some members had let their membership lapse and hadn't renewed - presumably banking on the bailiff recognising them and assuming they must have renwewed their tickets.

The countdown to the river season is now firmly in my mind. Just one more weekend to get through...