I've been out on consecutive days this week, visiting two venues that were vastly different. The first session was on the River Teme, which is a venue I'd never fished before. I was accompanied by Charlie and the intention was to act on a tip off from his cousin, who had said that plenty of Grayling were showing up in a certain section. Having never caught a Grayling before (or even seen one in person) I was well up for this venture.

It was a cracking bit of water, if perhaps running a little on the clear side. Mountain goat blood and climbing skills are required in many places though to cope with the steep banks. That said, there were plenty of pegs to go at and we covered quite a bit of water. 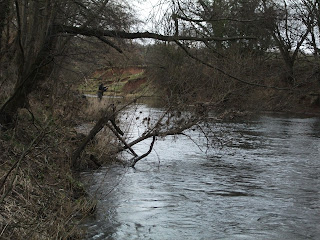 Sadly though, the Grayling never showed up and the fishing was actually quite hard. I thought I was going to blank, but a chub of around two and a half pounds saved me from that fate. Charlie managed a couple of Chub of that stamp and also came off second best when hooking a Barbel on gear that was under-gunned. 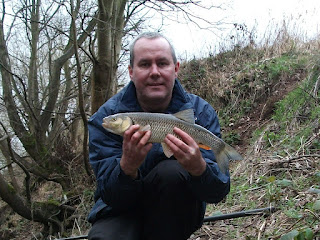 The next day saw me heading off to tackle the more sedate College Pool with Brian. Although clearly around 4 foot below normal level, there's still plenty of depth to it. I was hoping for Perch and set up a couple of leger rods - one with prawns and the other with red maggots. I would have liked some worms, but my preparation was hampered (bad planning on my part) and I had to do without them.

The Perch didn't show up and I eventually moved from prawns to bread, pellet and boilies at various times throughout the session. All of the action came on the maggot rig, but it was tough going to find the bites. I only had 6 fish all session.

The Bream put in an appearance and I had 3 of them. The two best went 5lb 5oz and 5lb 8oz. 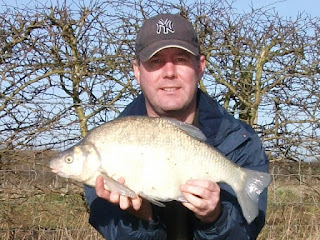 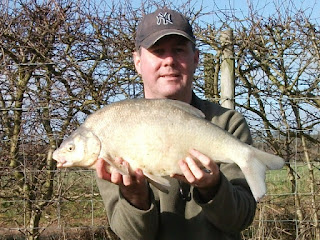 The other fish were small Rudd, Roach and a pretty little Carp, the latter of which gave a right old pull around on the quiver tip and tore off with such force that I thought I'd hooked one of the Barbel. 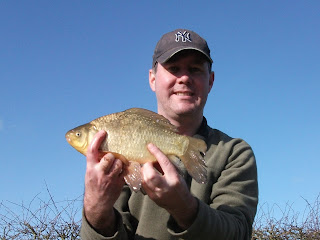 Brian didn't trouble the scorecard on this occasion.
Posted by Sean at 13:59 3 comments:

Some of you will be quick to notice a lack of photos within this post and that's never a good sign is it?

I had a session last Sunday - a day which saw the temperature lifting very quickly from the cold snap we'd endured for the previous couple of weeks. I was on the Avon at Alveston, but a different part to my usual haunt. It fished woefully and I never had a bite. I was initially targeting Chub, but the session ended up with me going for Pike again, but I might as well have been fishing for Marlin!

I blamed it squarely on the section of river I was fishing, as the conditions seemed fine - well, I was hardly going to blame myself was I?! It's a section that I struggled on at this time last year and I figured that maybe history was repeating itself. I convinced myself that the fish had shoaled up elsewhere, as I'd had plenty of bites off another section a few hundred yards away just 2 weeks earlier.

I started to wonder though, when I saw the reports coming in from other bloggers, suggesting that even the banker sections of the upper Avon were now struggling.

This week I had a Friday to spare and I went back to Alveston on my favoured village section. The result was just the same though. No bites and no fish topping. The Pike weren't playing ball either. It's suddenly turned into a tough cookie. I gave up and popped into Victoria Park (Leamington) on my way home to have a quick hour on the Leam. I should have just gone straight home though! Another blank hour passed me by and again no signs of anything fishy.

I had a busy day planned for Saturday, but part of that was to pop into the fishing show at the Ricoh for a couple of hours. I picked up a few bits, including a cheap adaptor for attaching a camera to a bankstick. Finally, no more precarious balancing of my camera on all manner of objects for those self-take shots. If only I had something to photograph...
Posted by Sean at 11:37 3 comments:

﻿I knew it was going to be a cold one and at -7C I wasn't to be disappointed. I briefly questioned my sanity, but then thought about the other options. Either I stay at home and find jobs to do (or more likely someone else would find jobs for me!), or go fishing. It didn't take long to decide!

With ice removed from the car, I was on my way through the Warwickshire countryside to my usual haunt of the Avon at Alveston. Any thoughts of doing anything other than Pike fishing were banished to the back of my mind. Most pegs had ice in the margins, but were perfectly fishable with a bit of thought and care. 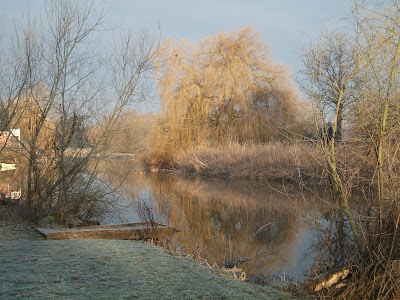 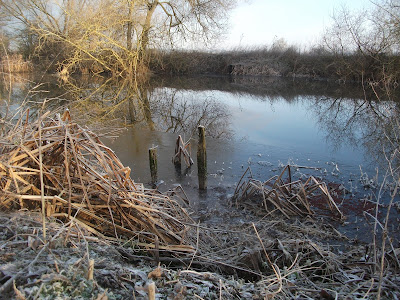 I settled into peg 3 and deployed two deadbait rods - one with a large chunk of Sardine and the other with a Sprat. Both baits came courtesy of Morrisons fish counter. My spare freezer at home houses quite a selection of bargain basement supermarket bought baits, to complement the tackle shop deadbait purchases that Morrisons would struggle to sell! 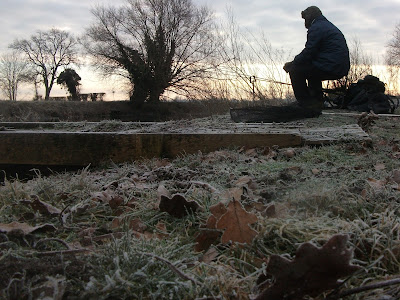 I didn't have to wait long for some action - in fact the first cast with the Sardine to the right hand side of the swim, resulted in a take. It looked a bit finnicky so I had to be patient to let it develop. I connected with the fish though and it came in reasonably easily. Deja vu crept into mind again,as it looked very similar to the fish Brian caught a week earlier. I removed the hooks and gave it a chance to recover in the margins while I prepared to weigh and photograph it.

I put it on to the scales just as a dog walker came by. "It's a bit cold for fishing" he said, while failing to notice me holding a lump of a fish in a dirty great net. I pointed out that the fish didn't seem all that bothered! His eyes nearly popped out of his head when he saw I'd caught something. I was set up for a self take, but his dog got in the way and the fish flipped round at the wrong moment! One day I'll have to get round to posting some of my outtakes on here! Fortunately the dog walker took the camera for me and made life a little easier. 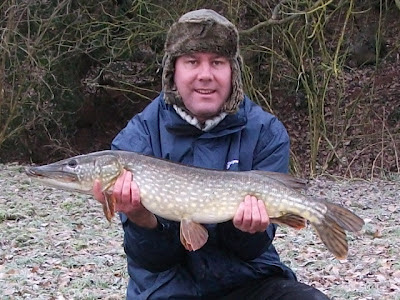 It weighed in at 10lb 2oz, which was 1oz different to Brian's fish last week. A check of the photos when I got in confirmed that it was the same fish.

I moved pegs straight away and went over to peg 4. It produced nothing, so I moved past the unfishable peg 5 and down to peg 9. It had the advantage of a nice bench, which I was able to customise with my unhooking mat for extra comfort (dry side up of course!). 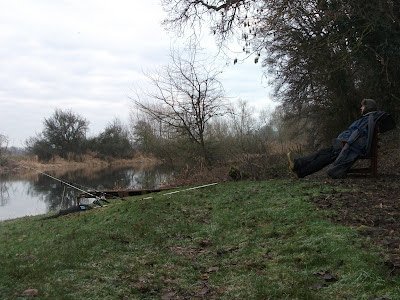 I slobbed  it out for a couple of hours, but nothing showed up. A few snowflakes started to appear and reports on the radio suggested that more widespread snow was starting to push through the Midlands. As I wasn't exactly bagging up, I took the sensible option of retreating home.
Posted by Sean at 08:23 1 comment: