I'm a big believer in luck when it comes to fishing. Skills learned through time on the bank, along with carefully executed plans and listening to those in the know, will clearly go a long way. But sometimes a slice of luck and even pure fate, can provide that little edge. Or it is just down to the more you fish, the luckier you get?!

For two weekday sessions I headed off to the Anker. In my limited experience of this waterway, I've found it to be a moody and frustrating customer. It holds some really good fish, but extracting them is rarely a cakewalk. All luck is welcome. 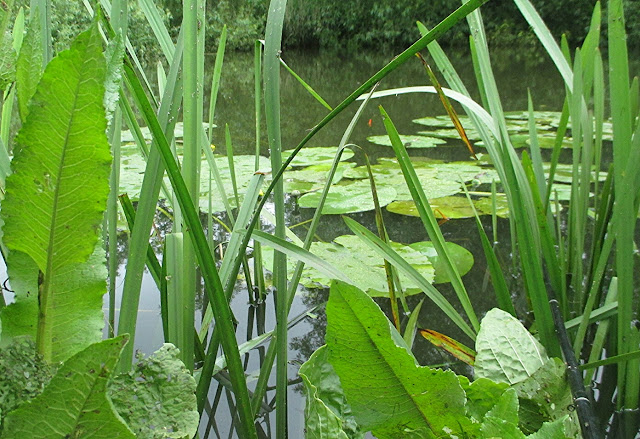 The river was fining down after a big rise in level the previous week. It was also chucking down, which is largely why I chose this river in the first place. I can park almost on my peg, which was a lot more appealing than a long trudge in the rain on the Avon.

The day was a complete frustration and fish were scarce. I'd banged the bait in early to see if I could draw in the target species - bream, tench or carp. Well into the day all I had to show for my efforts were a couple of perch - the best 1lb 6oz. I did lose a bigger perch though. 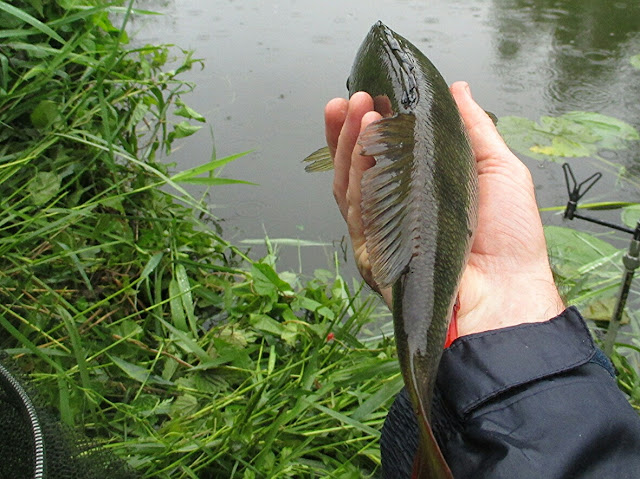 I was fishing two different rigs. One for a heavier attack with bookies or pellets, while the other was a float rig more geared for bream.

This is where my luck ran out. Twice I managed to hook decent carp on the float rig, but it turned out they were actually foul hooked. Frustratingly they didn't take the intended bait in the standard manner. I was left with a souvenir each time, although I never saw either fish. 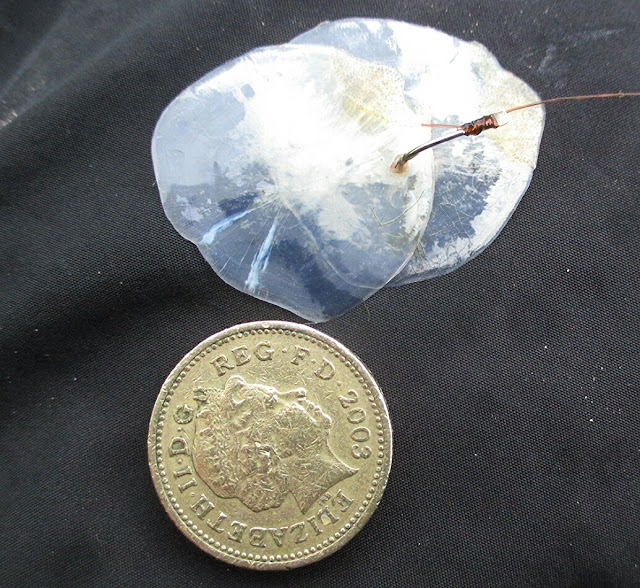 Defeated, I called it a day and returned a day later for a short session to settle the score. With carp showing their hand the previous day and knowing that I'd put bait in, it was an obvious choice to pick the same swim.

A cunning plan, albeit scuppered instantly by the only other angler on the stretch having got there first! Pollacks I thought, or something close to that!

So, I headed a few pegs upstream and chanced my arm in a recently renovated peg. I'd have preferred the far end peg, but it was already swallowed up by the now rising water.  The peg I settled for had a clear area about 3-4 yards wide, with thick lily beds either side. 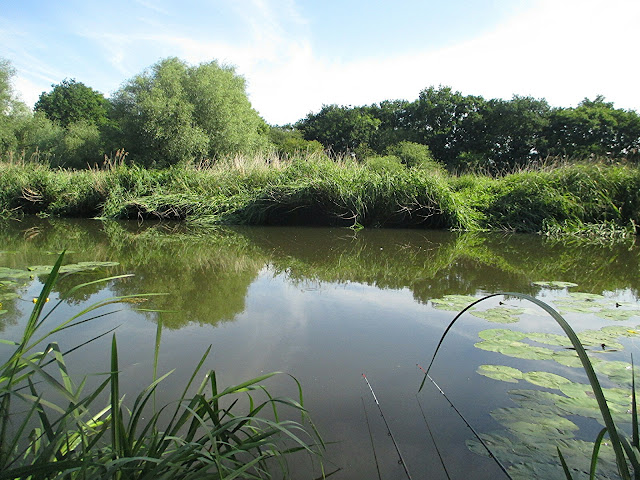 With just over 3 hours fishing time available to me, plan A was to bang in about 10 jaffa sized balls of groundbait. Half tight to the left lily bed and half to the right. Then sit and wait patiently for fish to find it. There was no plan B. 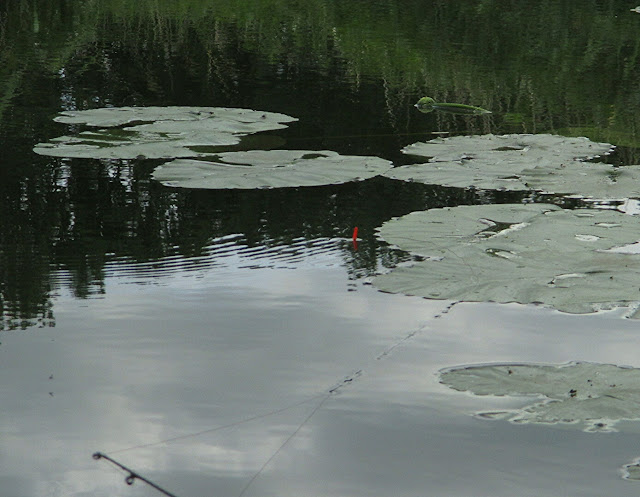 Nothing for well over an hour, but out of nowhere intense bubbles began to appear. Fancying something sizeable was now in residence, I retracted the maggot rig and replaced it with a prawn. Straight on the drop I had a take and the rod arched over. Clearly not a carp or tench, due to the pedestrian battle, but a decent slab instead.

When I photograph fish I always try to keep them in the same direction (head to the left). It's nothing superstitious. I just like to be able to recognise any recaptures of previous fish. I occasionally deviate from this if a fish has an ugly side to it. This was one of those scenarios and was done previously to the same fish last year. 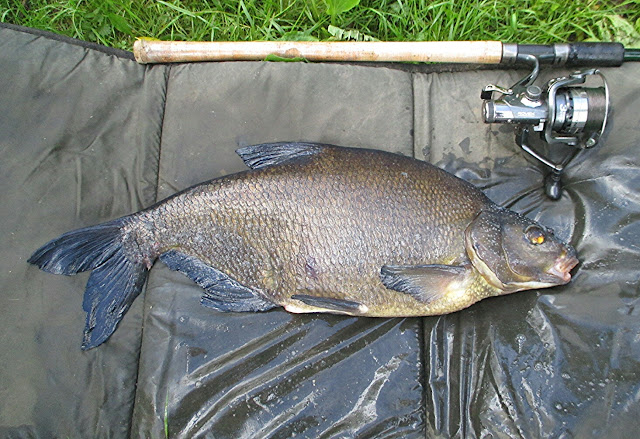 A battered, old, half blind, not overly photogenic bream, but I'm not complaining. It was a pb last time I laid hands on it and at 2oz heavier this time, it raises the mark to 7lb 11oz for me. Not quite the 8lb river target I set myself, but pretty close and there's lots of time left. A shade lucky though, as if I'd been the only angler on the section, or if there had been less water on, I wouldn't have fished the peg.

In terms of river targets, I set them out in my last post. The intention is to track them throughout the season as a percentage of target challenge. If I exactly hit a target that's a 100% score. If I exceed a target, I can also bag the extra points (but capped at 125% maximum). With 7 species in the fray, the target score is 700. The current position is:

A long way to go and some pb fish required if I'm to hit the 700 by March. To put it into context, I'd have scored just under 500 points based on last season's efforts.
Posted by Sean at 08:21 3 comments:

The river season opened a little earlier for me this year. No, I haven't moved into the land of fluff chucking, although it did cross my mind after my brief encounter with the Windrush in March.

Bruce Springsteen's River Tour hit my local arena a couple of weeks ago. Another top class effort from The Boss and I consider myself lucky to have been able to amble down along my local cut and roll in to such an amazing show. I pretty much had to be rolled out of the adjacent casino post show though. It was a long day!

I haven't fished much in the closed season - just half a dozen times. The estate lake was dire in the cooler early part of spring and I backed off. I briefly turned to the canal for a couple of sessions and actually enjoyed it. I managed to find an area that suits my need for peace and found plenty of fish. I didn't catch anything special, but I fancy a few more sessions next closed season. 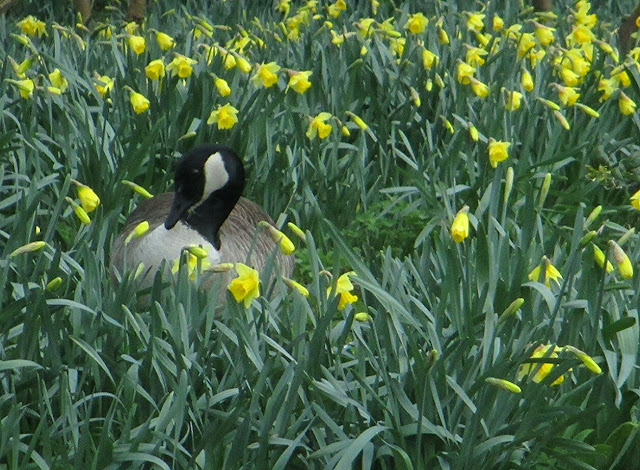 In recent weeks, bank work for one of my clubs has been the focus. It's something I enjoy doing and with a bit of investment from the club, coupled with some helping hands, it's gone reasonably well this year. I'm looking forward to hearing results from the newly installed pegs.

The 16th actually seemed to roll around quite quickly in the end. With it being the back end of the week I decided to work the week out and start from the Friday evening. A plan that soon backfired when the heavens opened several times over the week.

The plan was to hit the Anker for bream or tench straight after work, fishing into dark. With the river level heading into the amber warning zone and rising, I put my feet up instead! Thoughts now turned to Saturday.

I couldn't start early, as I had to drop my wife off at the station. She had a date with some Hairy Bikers at the NEC's Good Food show. My remit was to go fishing and wait for the request to be picked up. I was hoping the food was good!

The Avon was looking pretty decent considering the recent weather. 1.37m and falling, with plenty of colour. Fishing a fairly new stretch to me, I settled for a peg that caught my eye on a pre season recce. Mind you, most pegs looked bloody good in all honesty! I look forward to trying more of those when conditions improve.

I bounced a lead around to check for snags and variations in depth. Nothing to note really so I balled in some bait along the crease line down to an overhanging tree and chilled out for 45 minutes to get set up properly.

The plan was a smelly bait on the downstream rod for chub or barbel. Upstream I would fish a maggot feeder just to test the water really. I had an indication quite quickly on meat, but missed the bite. Although, I think the culprit turned up later...

While rebaiting the meat, my maggot rod banged around and I felt solid resistance. It wasn't a mental fight and I started to think a pb chub was on the cards, but it was a fairly placid barbel. At 7lb 4oz it got my season off to an unexpected start, but I really wish they'd read the script and fall to the rod with the heavier gear! 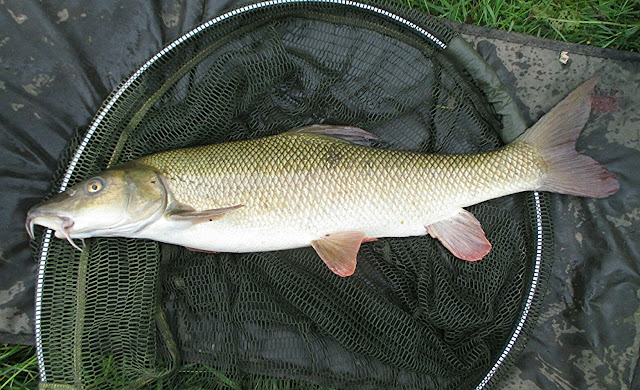 The meat eventually produced a fish after a series of missed bites, but only an eel that had clearly been gorging on the stuff at my expense.

A switch to double boilie threw up a 2lb chub and next cast saw me into something quite substantial. This fish went tearing off on a series of runs, but fortunately never went anywhere near a snag. After a patient battle I slipped the net under it and rested it for a while.

I dropped a text to a fellow angler further upstream and said I thought I had a near double in the net. With my pb at 9lb 8oz I fancied it would be close, judging the fish on length alone. That all changed when I lifted the net and saw the fish had a reasonable belly on it. Much meatier than the lean one I'd caught earlier, this was clearly a double.

On to the scales and they went up to 12lb 6oz (with the net). Minus the net, the verdict was 11lb 1oz. Thanks to Martin Roberts for venturing several pegs downstream to take some photos. 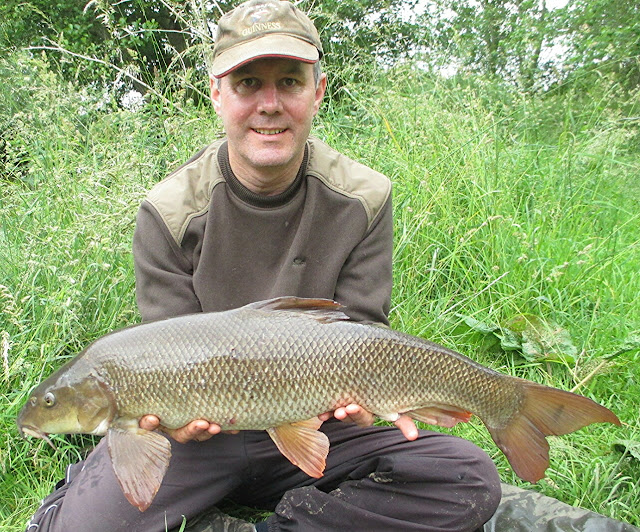 A new pb for me and one of a series of season targets ticked straight off. Targets (all from rivers) include a 3lb perch, 5lb chub, 8lb bream, 6lb tench, 10lb carp and a 20lb pike. The barbel target was 10lb. Let's see how many of those seven I can achieve...

Hopefully with a few days off work planned for this week, I'll nick another target pretty quickly. It's good to be back on flowing water. Nothing else comes close.
Posted by Sean at 14:39 3 comments: