Brian was otherwise occupied again, so I decided to have a couple of hours Piking on the river. The river was in decent nick and is looking more and more wintery with every visit.
Today's approach was going to involve a sprat, wobbled / sink and drawn through the river. The back up was a telescopic rod to thrash a big plug around the river, but it didn't see the light of day as it turned out.
I went for trusty peg 9 which has thrown up a few small Pike this Autumn already and it didn't disappoint. 20 minutes in and I'd banked a couple of Jacks around the 3lb mark. Both fish came close in and it was good fun watching the take happen right in front of my eyes. 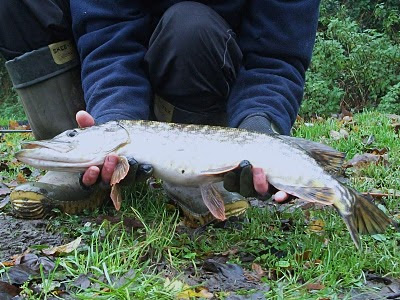 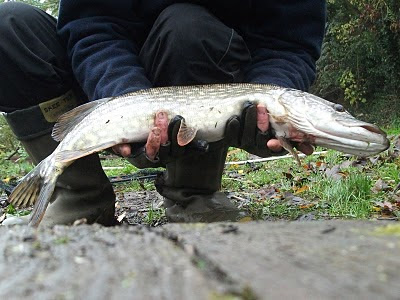 That was it for that peg, so I moved downstream to peg 6. Almost instantly I had a take, but the fish slipped off. It wasn't on long and I was fairly confident it would take again quickly. Straight back in and a fish was on again, but the result was similar. This time the scrap lasted about 15 seconds before the fish got off and I thought I'd buggered up my chance.
It wasn't to be though, as it was third time lucky on my next cast - not sure if it was the same fish being incredibly stupid, or perhaps a different fish. It was just another Jack though - slightly smaller than the earlier two if anything. 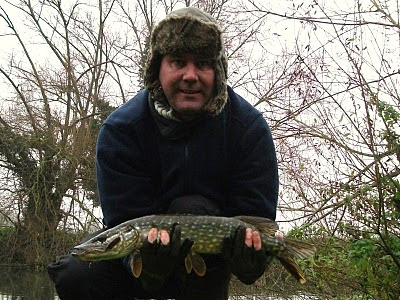 That was the end of action. I tried a few other pegs and retraced my earlier steps, but nothing else was doing. I had a bit of a comic moment on peg 2 though. I made the cardinal sin of not giving the staging any respect. Wet, muddy boots coupled with damp, slippery staging = accident in the making. No sooner had I stepped on to it and my feet were in front of my eyes. I went crashing down and landed squarely on my back and was left staring at the cloudy sky - rod still in hand of course!
It was more funny than anything and apart from a small twinge in my back and achy little finger, I was none the worse for wear. A few beers and I won't notice a thing.
As I was packing up a couple of unusual birds (for these parts) dropped past. I can't recall seeing any of these on my fishing travels before: 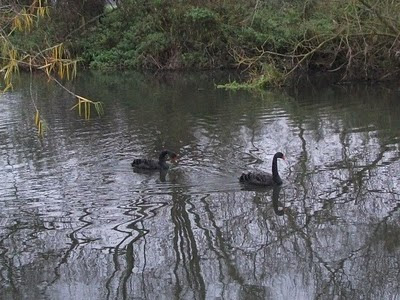 A pair of black swans. I wasn't sure at the time, as one of them appeared to have white feathers beneath the black when it stretched its wings. However, a bit of research shows that they are supposed to have white flight feathers, so it seems they are the real deal.

With Brian working this weekend, I mulled over my options on Friday afternoon. In the end I plumped for a short morning session on the river, with Barbel or Chub in mind. I figured that the conditions were pretty good for extracting one of the resident lumps.

I checked out the EA river levels site and it confirmed that the river was just starting to fine down again after the rain earlier in the week. The EA site quite useful for gauging the state of the river and it should come into its own during the winter months. It may have been covered in other blogs, but here's a link in case anyone hasn't discovered it yet:

The river was maybe a foot or so up and it looked promising. 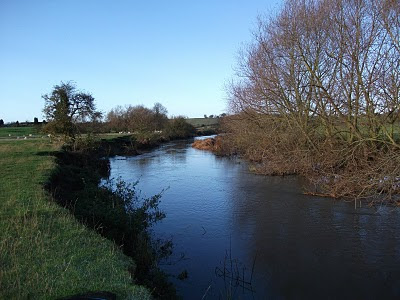 I tried pellets and meat (spiced and plain), but I couldn't get a bite and I royally blanked. To be honest I've suffered many a blank here in search of Barbel, so it's nothing new. I'm never put off from returning though, as I know it contains the fish of a lifetime. One day...

I amused myself for most of the session by watching the plentiful bird life, which are now a lot easier to spot amongst the bare trees. 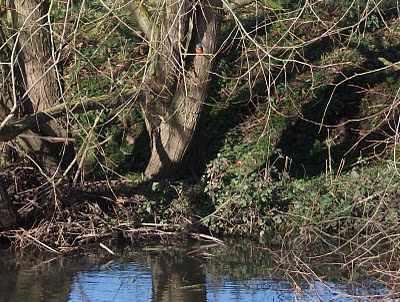 In case you didn't spot it in the above photo, here's an enlarged shot of a Kingfisher that was working down the far bank and dropped in at my peg briefly. 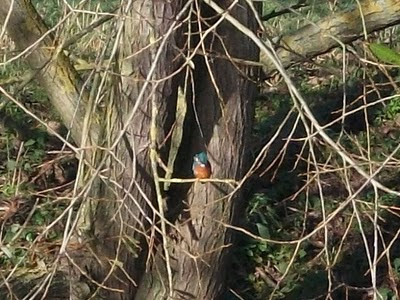 Brian has kindly sent me a photo of Charlie's Perch taken from the Avon just over a week ago - a fish of 3lb 5oz. 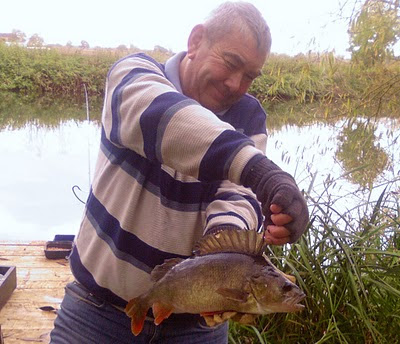 No fishing for me this week, as I was back on the oche for a change.
Posted by Sean at 10:30 No comments:

This is mostly for Jeff's benefit, in case he hasn't seen it:

Season tickets only now, at £60 a pop. Interesting change in policy considering that the numbers of guests showing in the visitor book were a little on the scarce side. I assume they just want to keep things simple and if they have a handful of takers, then it's no less worthwhile than it was on a free for all basis. It's also easier to administer I guess. Or, maybe someone has approached them to make it a bit more exclusive? It's certainly buggered up some late season plans I had in mind!

I'll keep a watchful eye on proceedings for now I think. I quite liked the place, but for £60 I could get myself an awful lot more water elsewhere. It will be interesting to see how many takers they get and whether the part season ticket proves more popular.
Posted by Sean at 14:29 2 comments: