A few sessions to catch up with here, kicking off with a weekend trip to the Trent with the usual crew. This was a change from the normal Wye Valley trips that we've been doing for several years now. The Wye still remains in scope for the future, but it was time for a change.

Having done a little homework beforehand, we knew certain areas to steer clear of, due to their popularity. If you haven't been to the Trent, you'll soon discover that it's very accessible. Lots of park on your peg options, both through cheap day tickets and readily available club books. Night fishing is easy to find too, which just adds to the attraction for many. The sheer volume of anglers on certain waters is something I'm just not used to seeing in my Warwickshire comfort zone.

A plan was hatched to avoid the masses. Day 1 on a tidal stretch that only allows season ticket holders to night fish, with day 2 on a club water that doesn't allow any night fishing and isn't fished from the opposite bank either.

The tidal stretch was a bit wilder than expected. Finding three pegs together was a tough one. Overnight anglers had nailed down an area on a sweeping bend at the bottom of the stretch and we eventually found an upstream area that suited us - after I'd done a spot of gardening to clear an extra peg.

Tidal rivers are alien to me and it was a little difficult to read. With high tide due mid afternoon, I was trying to wait for low tide before my feeding assault. In the end my patience ran out and I went too early. The river continued dropping for a further 3 hours!

For 25 minutes solid I repeatedly cast out a beefy 3oz feeder full of groundbait laden with pellets and caster. A good 40+ offerings in total and definitely the single biggest arm aching barrage I've ever done on a river. It was the only way to guarantee that I was feeding vaguely the right area though, in what was a deep and powerful swim.

The fishing was tough though, with no barbel or chub showing for any of us. Just a smattering of silver fish to maggot, although I had a couple of bonus fish which I'd like to think were courtesy of my heavy feeding. 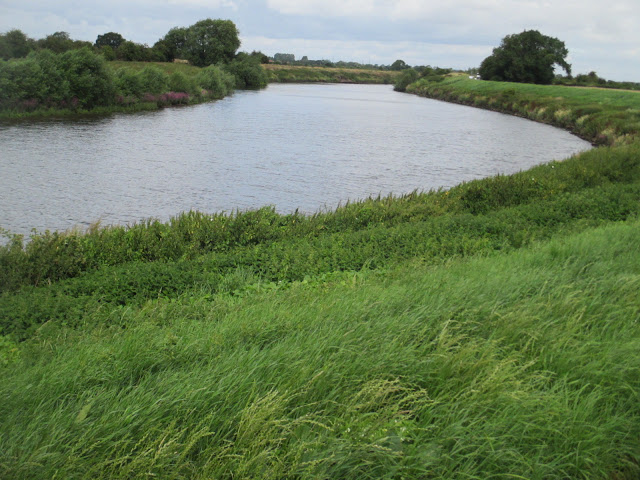 Both were bream. One of 2lb 8oz and a better one of 5lb 10oz which was foul hooked. An absolute beast to land too. If you've ever foul hooked a bream before on lightish gear, you'll know that they can pack a punch. Initially I had no idea what it was, other than not a barbel. In case it was a big chub, I had to take it steadily.

Only when I got it under my feet did I see it was a slab. A real pain to land in the powerful current and every time it turned side on, it would just get washed away. The most trouble ever from a bream!

Day 2 didn't throw up much. Charlie persevered with the float and had his share of silver fish. I wasn't in the mood to battle it and spent more time on bigger baits. Just the one suspected barbel encounter that resulted in a hook pull shortly into the battle. 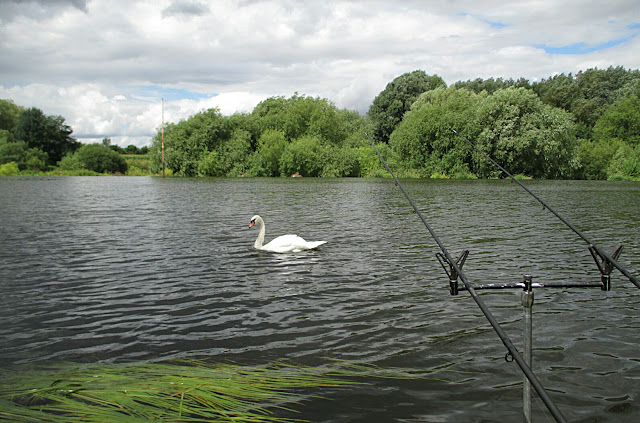 Brian nicked a lure caught pike at the death to win the bragging rights for biggest fish of the weekend. No prize for that though, as it wasn't part of our side bets. 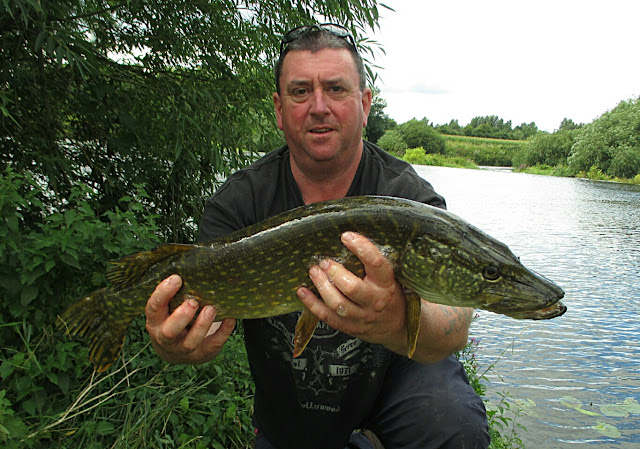 Species were tied between me and Charlie on 5 each, so that now rolls over to next time. Perhaps a shade unlucky though, as he actually hooked two others. The only problem being that one (pike) attacked the other (bootlace eel) on the retrieve and bit him off!

I took the bream pot, with the chub and barbel pots also rolling over to the Autumn instalment. Although it wasn't productive this time, I think we learned a lot and the potential for very big fish is plain to see. We'll all be better prepared next time.

Back locally and with a week off work, I had to revise Monday's plan due to a sore eye. Eventually I settled for a couple of hours on the canal late afternoon, but it wasn't easy. Just a few small roach and skimmers.

Next up I headed back to the Anker to see if I could improve on my bream tally. Three people there on arrival and that quickly ruled out my first and second choice pegs. Turning to the third choice I gave it the usual positive helping of groundbait across both margins. A float fished bunch of maggots would be the tactic. 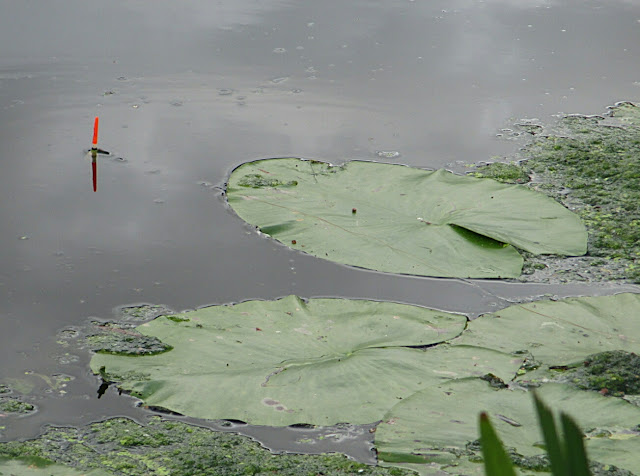 Cutting to the chase, after almost 5 hours I was biteless. With boredom setting in, I decided on a 2pm cut off, so I could get home and at least do something productive with the day.

1-40pm and the float finally starts to dance. A tentative bite and I wasn't going to risk rushing it. Finally it dipped under and I hit it. A good bend in the rod suggested it might be a bream, but then it started jagging a little. A big perch at last I thought, but then it went jag, jag, jag in a way that can only mean one thing...

Eel - and a decent one too. A fact I know, because I voluntarily began supplying commentary to anyone who might be within listening range. Not my normal style unless I know those around me, but it was just spontaneous excitement.

The old guy from a peg upstream was equally surprised though, claiming it to be "the biggest ****ing eel I've ever seen!". He helped with the netting and I was glad of the assistance.

With a pb of 1lb 9oz, that was easily about to be eclipsed. 3lb 5oz was the verdict. It's not going to set the eel world alight, but it's a special catch for me. Still no match though for the canal caught leviathon that George Burton caught in the last blogger's challenge. Just feels weird when it scores less than a chub of the same size, which are infinitely easier to find. There's no justice! 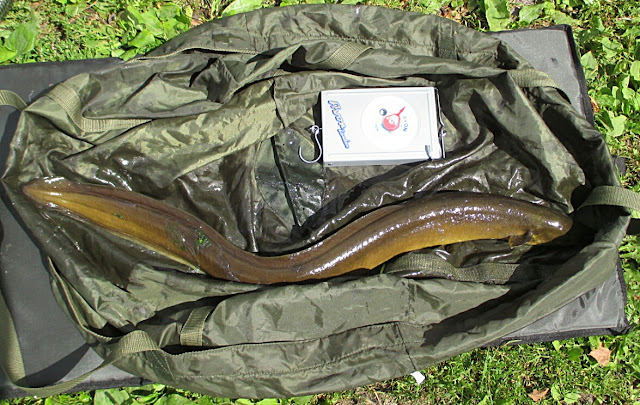 I called it a day there and then, figuring I wasn't going to top that.

Next up was a day where I was given free licence. My wife was working from home and she wanted me out of the way to avoid distractions. That's a brief I can happily work to.

Making her feel a little guilty due to throwing me at the mercy of the wind and rain, I bid her farewell and set off with a double ration of food and drink supplies. We didn't rendezvous again until 14 hours later. I take my duty to vacate the premises seriously!

It proved to be an odd and enjoyable day. I'd planned to split the day in two, meeting up with Charlie early afternoon to show him a different stretch. As it happened, I got settled in my first area and spent the day there. 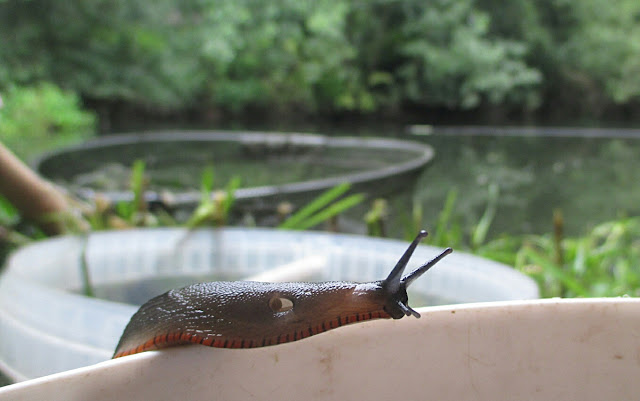 After catching plenty of perch on the stick float, along with the odd skimmer, dace and roach, I decided to put out a sleeper rod for carp. I'd seen a low double taken from the area last year and it made sense to increase my options.

10 minutes later and the sleeper rod was off - freespool reel doing its job perfectly. The problem was that it wasn't the intended carp, but a barbel with a preference for slack water. An immensely powerful fight followed, but I eventually won out. A fish of 7lb 10oz. I gave it plenty of time in the net before doing anything and it recovered fine. 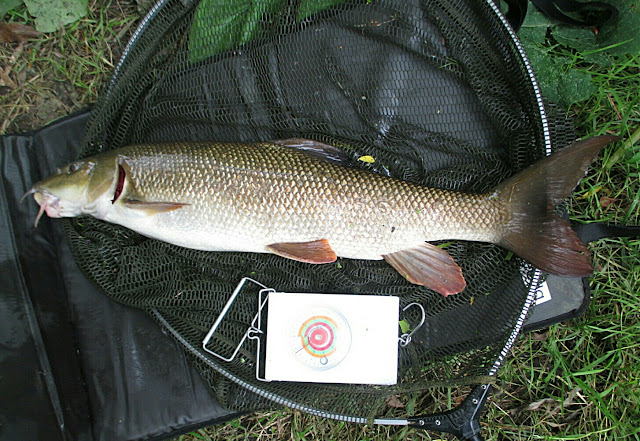 Second cast with the sleeper and the outcome was almost identical. A brief wait saw another barbel in the net. 7lb 9oz this time, but a less fierce fight. 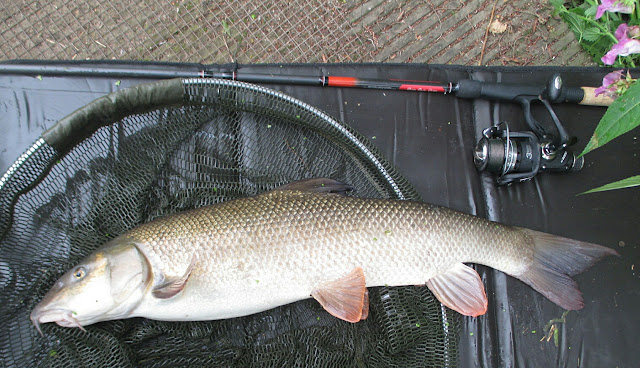 Third cast saw another bite. Eel! It couldn't last could it? Charlie had turned up by now, although his navigational skills had failed him slightly. A missed gate saw him doing a spot of orienteering and ditch wading to reach my peg.

Things slowed down considerably over the next few hours, but Charlie had taken a couple of chub to 3lb 11oz and lost a barbel that nearly cost him his rod too.

We agreed on an 8-45 finish and it was closing in on that as I began to retire my float rod. The meat rod screamed into action again and another intense battle kicked off. A hard but incident free encounter saw me bank the best barbel of the session at 9lb 2oz. 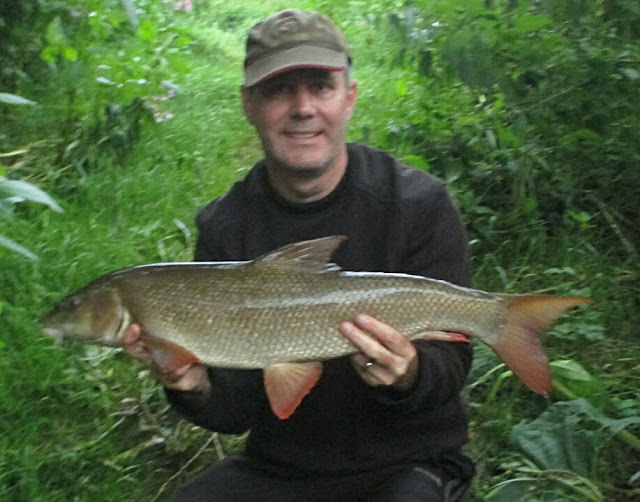 It's certainly taught me a lesson. Of all the pegs available, it's one that I would have put towards the bottom of my list in terms of barbel potential. There are many other reliable well known pegs that consistently produce.

It may have been pure luck on this occasion, but maybe there's some logic to be found. The fish must patrol through the area from time to time and maybe they were caught off guard by someone targeting them in an unfashionable peg? The fact I was targeting carp is something I'll conveniently overlook. You can't beat a bit of luck?!
Posted by Sean at 08:28 4 comments: