The Story So Far

A barren period in terms of posts from me and not unlike much of my fishing.

Rewind back to the start of the season and my customary week off work coincided with some stinking hot weather. With low and clear rivers, coupled with working around wife related drop off / pick ups, it made for me hitting the bank in less than ideal conditions.

Four different rivers were tackled in that week. The Stour (Warks) kicked it off on the 16th. Wanting to avoid the masses, I opted for this small, but often deceptive, waterway. It's now back on limits to me due to an extra ticket this year.

I had the three meadows to myself on arrival and only met one other angler all day. Just what I wanted for a gentle season opener. Plenty of fish around, but all small. A couple of chub up to 12oz were the only fish to get the landing net wet. I'll be back later in the season and given the good head of prey fish, I think some of the many deep holes will have to be explored for pike.

The attraction of quality bream on the Anker lured me in for a couple of days. A bad mistake in the conditions though and I bombed out miserably. A complete blank one day and just a few small fish the next, along with a pound perch.

A day exploring above and below an Avon weirpool yielded more small fish - mostly perch. A bonus ruffe popped in an appearance though, which ticked off a target for the Blogger's Challenge. At 1.35oz it's hardly a specimen, but in terms of points it's similar to a pound roach. Doesn't seem quite so silly when you look at it like that! 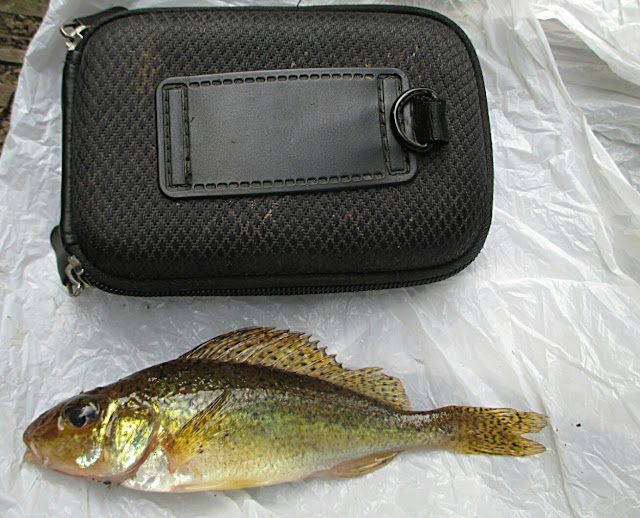 Fishing that day with Brian, we cooked up a plan there and then for the following day. A long overdue trip to check out the Trent for a future jolly, was given the green light.

The stretch we headed for was an easy access one that I'd found on the internet. What I didn't bargain for was the sheer popularity of the place. Utterly rammed! I saw more people fishing in one day than I have sometimes seen in an entire season!

A world far removed from the one I normally operate in. Just finding a couple of spare pegs together on a one mile stretch was pretty tricky. With no fancy rod pod / alarms and only licenced for 2 rods, I was clearly an under-gunned outsider here.

Slim pickings on the fishing too, but I quite enjoyed the challenge of the big river. Just a dozen or so small fish, but expectations were low given the conditions and available time. The key was to get as much information about the area as possible. Hotel, pub and food outlets all checked out! 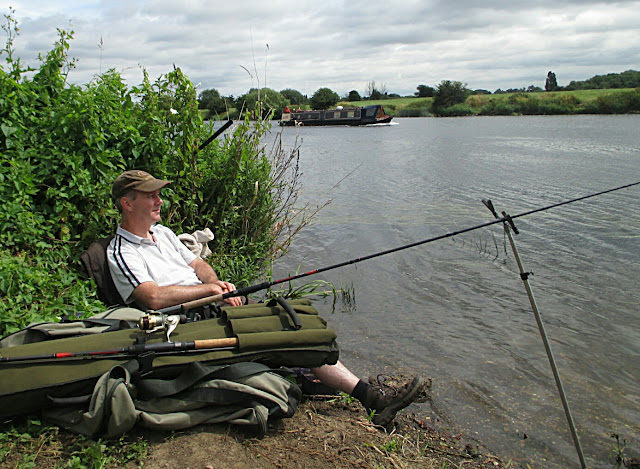 It's pretty clear we'll fish elsewhere next time. When the bailiff advises you to turn up on Thursday to secure weekend pegs, I know it's not for me!

A couple of other Avon trips produced just small fish and pike were proving a pain. I suffered a bite off before managing to land a small jack one evening. On release it regurgitated a small and now deceased dace. The casualty was scooped up and now resides in my garage freezer, destined to find its way back into a bigger predator's jaws come Autumn.

A couple of very short opportune evening trips targeting barbel, threw up the odd chub to just over 3lb, along with an obligatory meat loving eel. Just one whisker related encounter and I came off second best to a snag on that occasion.

Two consecutive weekends were wiped out by a holiday, which brings me right up to this weekend. Itching to get out and lacking in drinking buddies, put Saturday afternoon / evening in the frame. Plenty of rain forecast, but with recent extra water in the systems, I still fancied it.

I opted for the Anker for ease of access and was pleased to find the place empty. Bagging my preferred peg I gave it my standard approach for the bream. Ten balls of groundbait laden with hemp and molasses, split between right and left hand margins into 9.5ft of water (was 8ft on last visit!).

Tactics were float fished maggots (4 on a size 12 to 3lb) just tripping the very weedy bottom about 10ft out. The large hook and bait seems to help avoid the plentiful small roach, but the first taker was just that - lucky too, as a pike nearly nailed it!

Next up about an hour in, it wasn't a roach though and I was connected to the intended target. A bland fight saw a quick surrender and I'd got a good challenge points scorer in the net. I thought 7lb and was pretty damn close at 6lb 15oz. 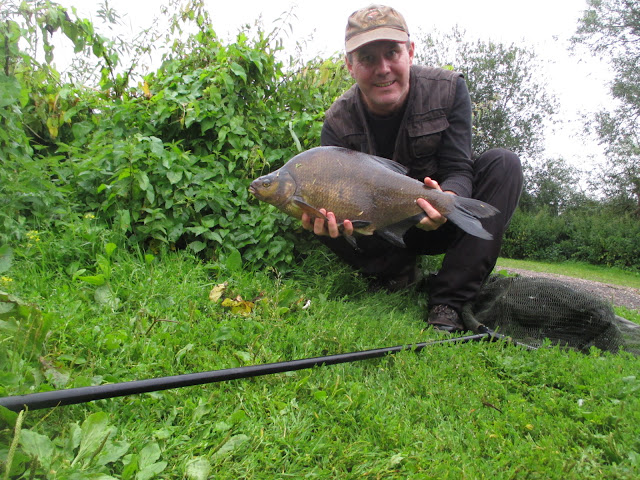 Bites were infrequent, but by continually switching lines from right to left margin. I banked the odd one here and there. Most notable were a perch of 1lb 6oz which was quickly followed by a real scrapper that I thought was a certain two pounder. It was just shy at 1lb 15oz. More good points though. 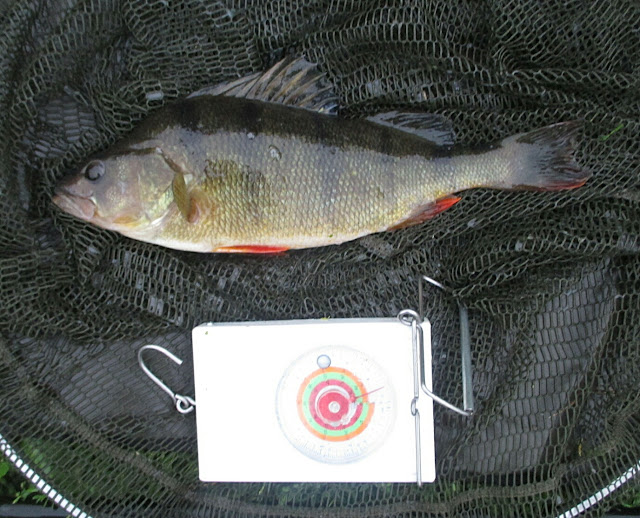 Rain blighted the entire session with no letting up at any time. Bites petered out too and I began breaking things down as the darkness started to set in. With everything but umbrella and landing net packed away I had one last chuck.

Switching to the left margin, I could barely see the float tip. Then within seconds, I really couldn't see the tip. A flick of the rod and I was carefully playing another decent slab. A bit more fight in this one, but it rolled nicely into the net first time.

Certainly bigger than the earlier one, I dared to think it might make 8lb. My worst guess of the night though, as it fell short at 7lb 8oz. 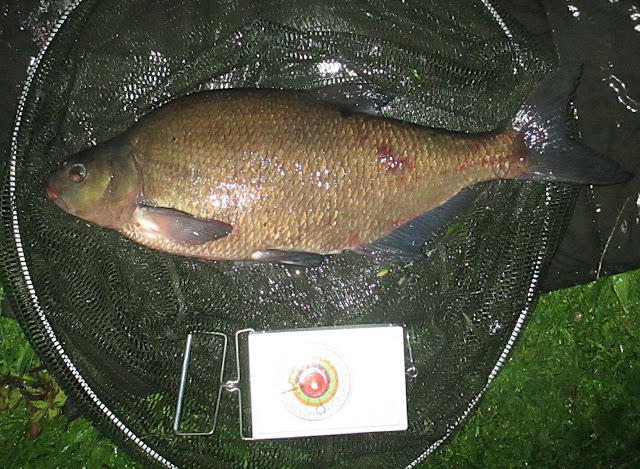 It was nice to finally get something right, in what has been a pretty quiet start to my season. Lots of time left though and plenty more fish to target.
Posted by Sean at 14:24 1 comment: