I'll begin by clearing up what's happened in the previous couple of weeks. A couple of weeks ago I had to forego any fishing due to a weekend spent wrestling with my central heating system. My routine maintenance didn't quite go as smoothly as I'd hoped and it meant that my bait would have to fester in the fridge for another week.

Last week I decided to give the river a miss and headed for an exploratory session on an estate lake. The exploration side of things was pike related and I popped out a deadbait in the margins while I plundered roach, perch and hybrids on the float. Plenty of action from the silver fish - pretty much a fish a chuck but nothing of any size. Not a sniff from the pike all session though. I'll return over the winter for another crack whenever the river is out of sorts.

This week saw me back on the Avon and it's a session that I'd really been looking forward to all week. I knew from early in the week that the weather was going to settle down nicely and coupled with that, the river was also set to fine down nicely. Throw in the fact that I hadn't been on the river for 3 weeks and I was really eager to wet a line.

I turned up with a full quota of gear to cover all angles, as I really had no fixed game plan. I walked up to the middle of stretch and very nearly plumped for another crack at the bream on the feeder, but then I remembered cursing myself after my last visit for not trying one of the downstream pegs. I wandered back downstream and settled on a peg with a decent flow down the middle, but with a nice inside slack that was 8ft deep. 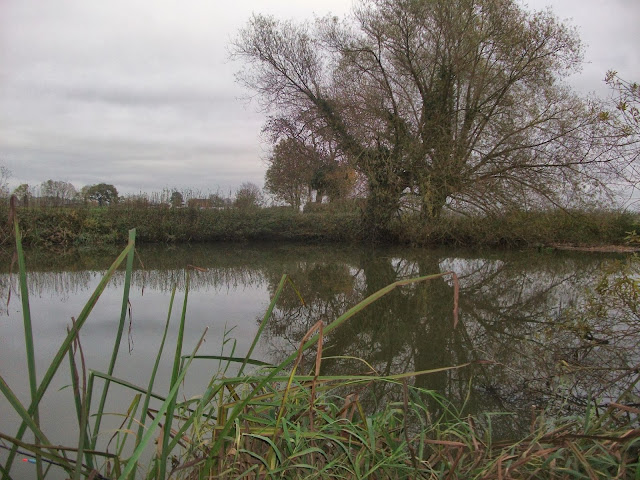 The river was a few inches up, nicely coloured and pretty much bang on what I wanted to find. I popped in a few balls of breadmash mixed with a small amount of groundbait and casters. A couple of baitdroppers full of red maggots were also lowered into place just a rod length out.

I kicked off with a float and centre pin approach. The Maver Powerlite was the order of the day with its 2ft extension taking it up to 17ft. It's a rod I've grown to like over the years and on the river I find it gives me more control than I get from my shorter rods. The float was a home made avon that I'd knocked up from a quill and balsa during the week. The starter baits were maggots and casters on a Kamasan size 15.

Roach and Dace arrived quickly, but all were small. I fired in some extra groundbait and got the first indication that predators were around. Out of the corner of my eye I saw a flash through the water from what looked like a decent perch. I couldn't resist grabbing my deadbait rod and giving it a go. It was also an excuse to free up my hands for a bit, as I needed to set up a leger rig for later on.

It didn't take long to get some action. The float trembled a little, then just slid quickly away. I struck and thought it was a jack pike, but I was surprised to see my 2oz roach had been scoffed by a perch - my first ever on a deadbait. I'd never considered trying for them on deadbaits before and it has really opened my eyes. I'll be looking at refining my approach from now on to see if I can snare one of the bigger ones that patrol this stretch. This one went 2lb 4oz. 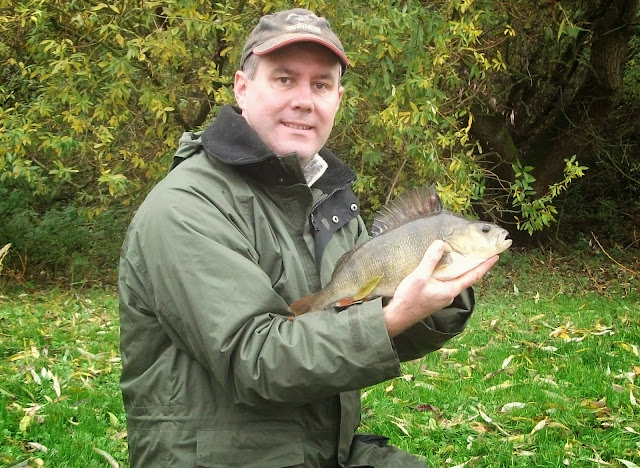 To show the size of bait these fish are happy to tackle, I took a picture of it with a deadbait similar to the one I used.
. 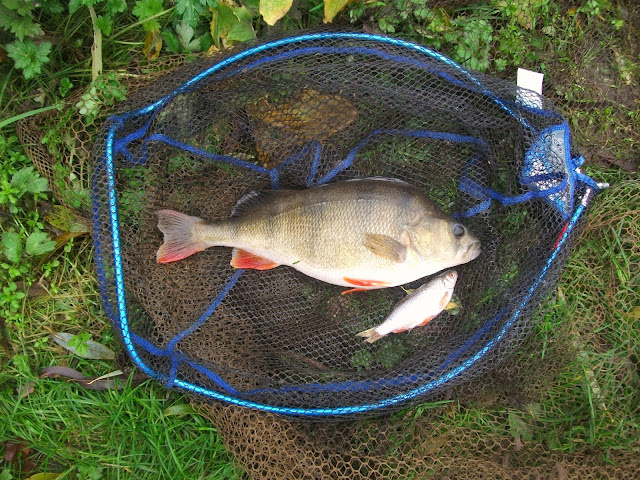 Although I did have some further periods spent on the float and the leger, I concentrated mainly on the predators. I caught 4 pike from the same swim on smelt covered in a bright red worm oil. I've mentioned this before and I have no idea if the oil makes any difference, but it's giving me confidence right now, so I'll stick with it.

All of the pike were jacks - the best perhaps about 5lb. I also trialled a single hook rig and it seemed to go well. I did lose a couple of fish, but I've lost plenty of fish with trebles before, so I'm happy with the initial results. Sadly I ran out of deadbaits with an hour or so to go, so I had to revert back to other tactics. 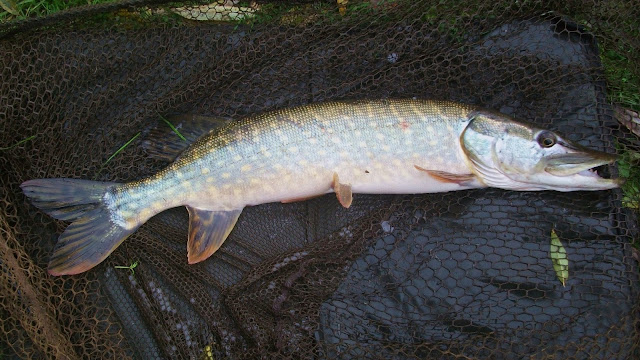 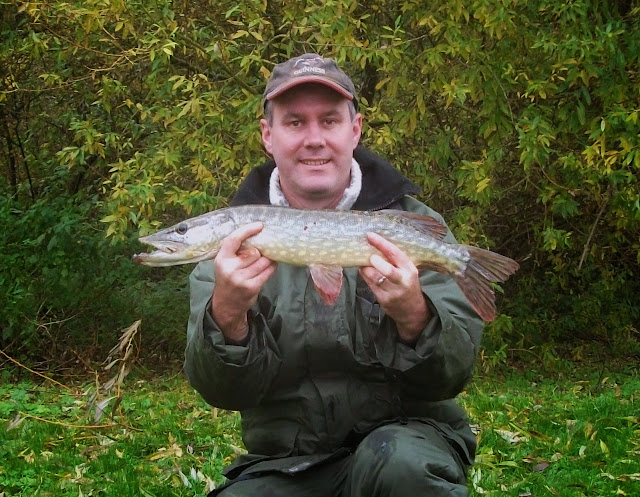 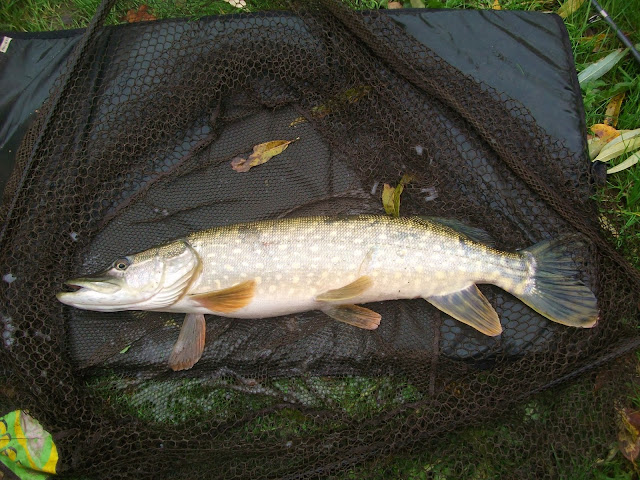 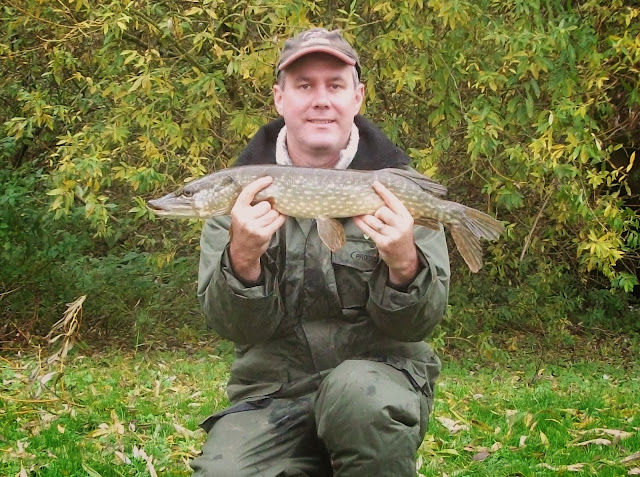 I had one other perch, but not on deadbait - a bunch of maggots for this one which went 1lb 14oz. 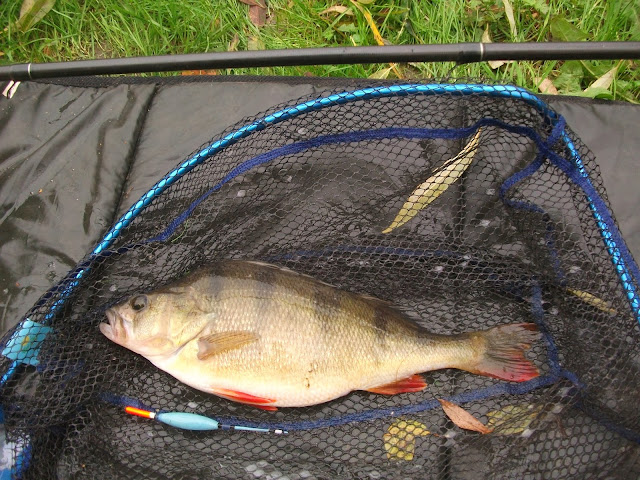 It was a really enjoyable session and as is often the case, I had the river to myself. Temperatures are set to drop a bit this week and we might even have the first glimpse of the white stuff - but only a token gesture if reports are to believed. Hopefully the river will remain in decent nick for next weekend and I'll set about tackling the predators again. I'm already working on some new ideas for the perch and a few things are starting to sprout. I'll do some more research and we'll have to see where it takes me...
Posted by Sean at 12:47