A bonus morning session. With my wife insisting on heading to the gym to work off some over indulgence, I decided to take it easy and go fishing.

It was a cool, crisp -2C on arrival, as I dispatched the remnants of my morning cuppa. Leaves rustled as they became caffeine coated, but then kept on rustling. What's that all about? Ah, the ubiquitous robin had arrived once again after a feed. I gave it a small offering and headed off into the gloom.

Despite wanting to get away from the predator fishing for a little while, I backtracked on that decision. When it gets really cold I struggle to do anything else.

With limited time, I chose a peg with lots of bank space and plenty of water above and below me. I'd sit it out for the full session and work as much of the ample peg as possible. 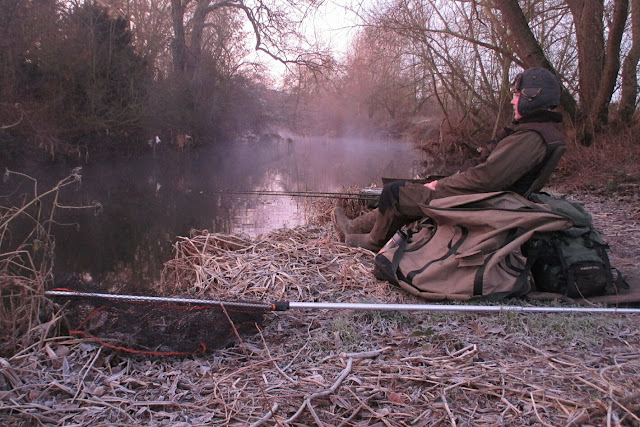 I've mentioned it in other posts that I'm a bit of a twitcher (of deadbaits). The way I like to approach such a big swim is almost like a game of battleships. Imagine the swim viewed from above as a grid of 1 yard squares. The object is to get a bait in every square, to search out fish that perhaps aren't all that active right now.

This means moving baits around the swim regularly, usually in a series of V shaped retrieves using 2 rods. Start long and twitch the baits back a yard or so at time, every 3-5 minutes. Keep varying the angle of the V and fish different baits on each rod (roach, smelt, lamprey and sardine on this occasion) all the way back to the nearside bank to complete the V.

A simple and cunning plan that's good for keeping busy and focused on the coldest of days. The problem was that the fish weren't having any of it! 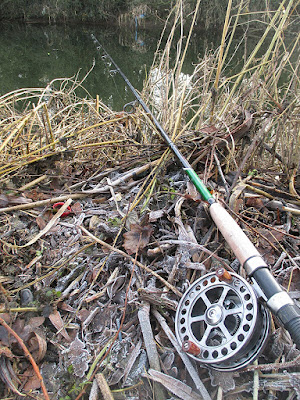 Just one bite in 4 hours and from a fish I'd had a couple of weeks ago. A zander of 5lb 15oz - an ounce lighter this time. Thanks to Martin Roberts for the photo and sparing me another botched self-take. Martin, despite a later start, did me for numbers from a couple of pegs downstream. A pair of very clean fish - a zed and a jack.

The robin was pestering me again as I was packing up the car! New Year's Eve is looking like my next brief opportunity. More predator fishing is likely if it stays cold, but a change of venue and river is on the cards next time.

With one club ticket up for renewal next week, plans are already being hatched for next year.

The estate lake ticket is being dropped as it hasn't delivered on various counts. I'm sticking with the other three river based clubs though, which leaves a gap for something else. It looks like I'll be returning to old ground, but in search of something new.
Posted by Sean at 02:53