The Woes of Autumn

Autumn is a time of the fishing year I always look forward to. Pretty colours, fish looking to fill their boots before things turn a whole lot cooler and predator season just around the corner. What's not to like?

Sadly, things aren't quite going to plan for me. Looking back over the past month or so, I kicked off with a dour Stour session. The peg I fancied fishing was occupied by the owners doing a spot of tree cutting. From then on I never felt settled or confident and I fished poorly with very little to show for it. My partner for the day didn't exactly bag up, but still put me to shame.

Next up was a much needed and highly enjoyable Canaries holiday to the island of Fuerteventra. No fishing though, but I couldn't pass up a catamaran trip searching for whales and dolphins with food and a few beers thrown in.  Some great views and the whales obliged, as did one or two other sights! 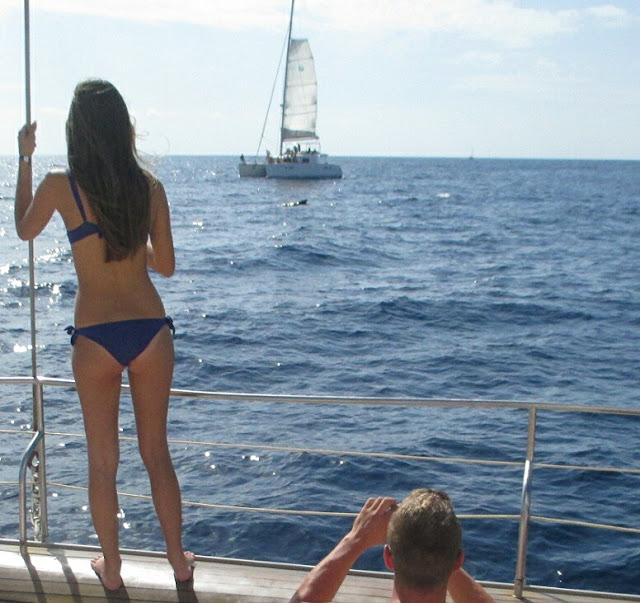 Back in the UK and another crack at the estate lake roach beckoned. I tackled them on the float this time and left totally biteless. Carp once again taunted me and despite some audacious positioning of a floating crust, I couldn't tempt those either. Nearly had a gull though!

Fed up with stillwaters again, I returned to the Avon next. Inspired by various pictures of big perch, I went armed with just worms and prawns. I caught plenty of small perch on the worm initially before it quitened down. A solitary small greedy chub was the only success on the prawn. 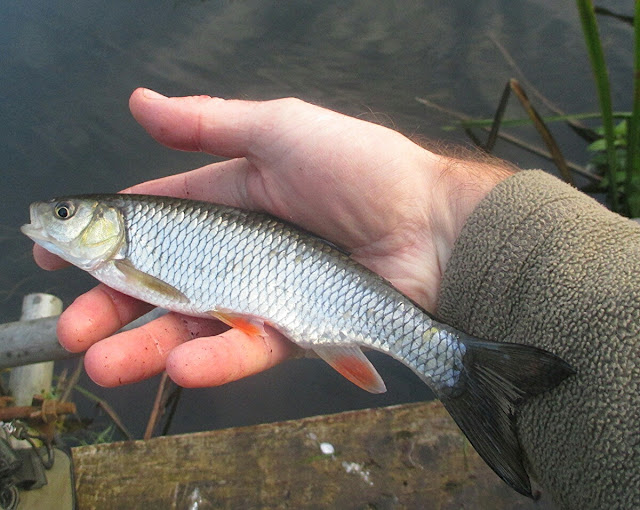 Pike problems were inevitable when the odd roach began to show and I managed to bank a small jack. 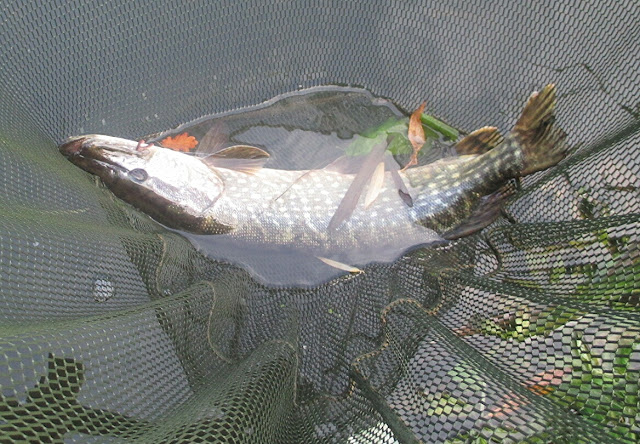 A more pleasant day than the previous offerings, but the bigger perch eluded me.

Then it was off to the Wye. This is always one I look forward to, but it seldom seems to deliver the goods for me. We were on a new stretch for day one and I was pretty impressed with the access and the water itself.

With the usual side bets struck (biggest barbel, biggest chub, most species), I kicked off with a maggot feeder to nail a few species. With small chub and missed bites plentiful, I switched to a float attack. Lots more small chub, but eventually a dace, bleak and some minnows swelled the count to four.

It was then all out for barbel or a proper chub, as I'd failed to hit the one pound minimum to qualify for the side bet. I fed some bait and went for a walk to give it a rest. On return it didn't take long to get a take and it was from a barbel.

The fight was hard but without incident and a fish of 6lb 10oz was in the net. I gave the fish plenty of time to recover and called Charlie from the next peg for a quick photo. Not the best I'm afraid with all of the clutter on show, but it was a tight peg and I had no room to swing a cat. 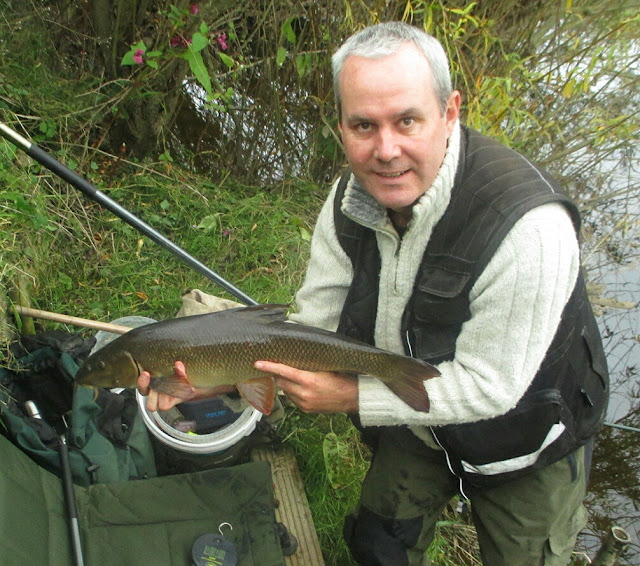 And that was the end of the action for day one. Brian had matched my species tally and had included a bonus trout. We'll certainly be back to this stretch next year, as there's other swims we really fancied but didn't have time to try out.

Day two saw us on a familiar stretch and pretty much an all out barbel attack. The first set of swims threw up a blank in terms of big fish and we brokered a move to deeper water. Things looked up when Charlie hooked a barbel first cast, but it snagged him and he missed out. 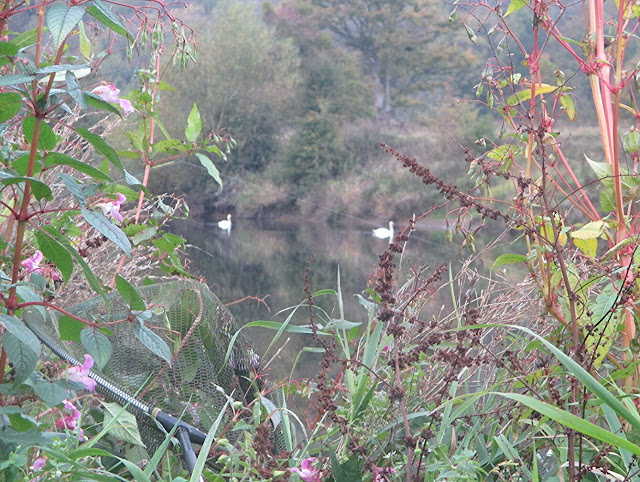 It didn't kick on though and a degree of tedium set in. I'd been suffering all day with a sore eye and as a long weekend drew to a close, I began to become very dozy. My ever increasing state of slumber was abruptly ended though. Not by a 3 inch tap, or even a 3 foot twitch. This was a 3 yard dip!

Yep, the whole damn rod was pulled clean from the rest and into the Wye while my guard was lowered. I've seen it happen to a couple of others before (one of whom was in the next peg!), but it's never happened to me in over 30 years of fishing. Typically the fish took the wrong bait. My other rod had a bait runner engaged and would have been fine.

Mortified at the likely loss of a decent reel and John Wilson Barbel Quiver rod, I watched the rod pull out to mid river. Luckily it ground to a halt, as the fish found a snag. Brian's lure rod came to the rescue and after several near misses I eventually got a hook up and the rod was banked with a bit of handy netting from Brian.

Disaster averted, but no fish either. When I told the bailiff later in the day, the same thing had happened to another angler the previous day, but he luckily retrieved the rod and banked the fish.

There was no more action, so I pinched the barbel pot by default. Sadly the reel was a shade knackered and had all but siezed up. I've stripped it down fully and might one day attempt a rebuild. In the worst case scenario I will at least have a full set of spares, as I have another identical reel. Shame though, as they made a great pair of workhorses and I could switch spools at will.

Closer to home I tackled a moody Anker with Brian. I'd like to blame the sharp overnight drop in temperature for our poor effort, so I will. In all honesty it looked in good nick though and the rotten stench that hung over our previous visit was long gone. The fish were quiet though and I just about avoided a blank with my first pike (by design) from the venue. Only a jack of 5lb 10oz, but a start nonetheless. 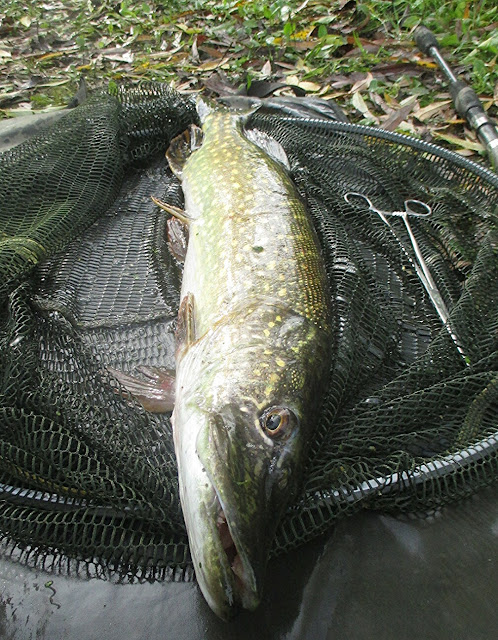 That brings me to to this week and I was eager for another crack at the Anker. Carrying a little more water, the river looked bang on again and I decided to ladle in the groundbait across two areas of my swim into 10-11ft of water.

A slow start was ended when I reached for my float rod to offer a different presentation, only to see my quiver tip dancing away merrily. A quick grab of the rod was met with solid resistance and the fish took line. Then the dreaded hook pull. Bugger!

Meanwhile the pike rig was proving frustrating. Two clear cut bites were met with zero resistance. I've never encountered that before. I'm not sure if crayfish are present, or whether something else might have been causing it. It definitely wasn't debris caught in the flow, as both bites saw the float moving upstream.

I pressed on with the switch to a float rig and was quickly rewarded with a nice perch of 1lb 7oz. 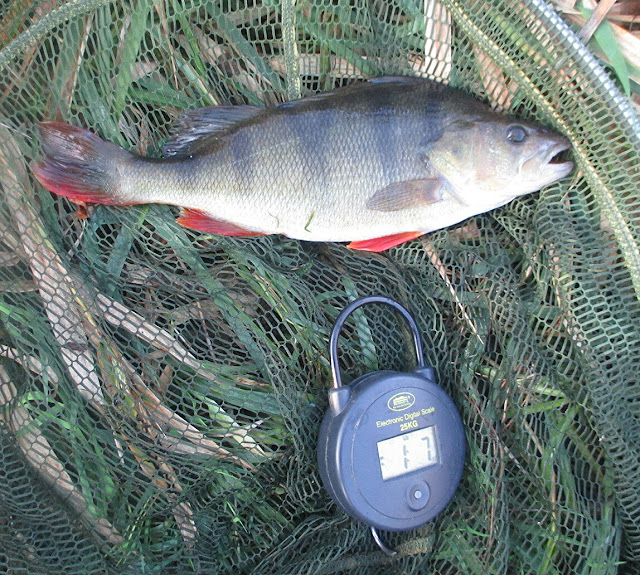 It then got hugely frustrating with lots of intense bubbling across both lines. A big and very dark bream poked it's head above the surface just beyond my pike float, before flipping over and revealing a big paddle of a tail, as it headed back to the depths. There are some big old bream in this river and I thought I was nailed on for some action. 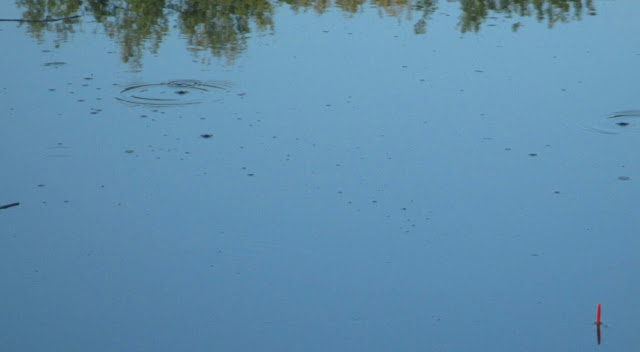 Try as I might, I couldn't fool anything though. Definitely unfinished business here. I did manage to sneak a jack out though, to give some small consolation 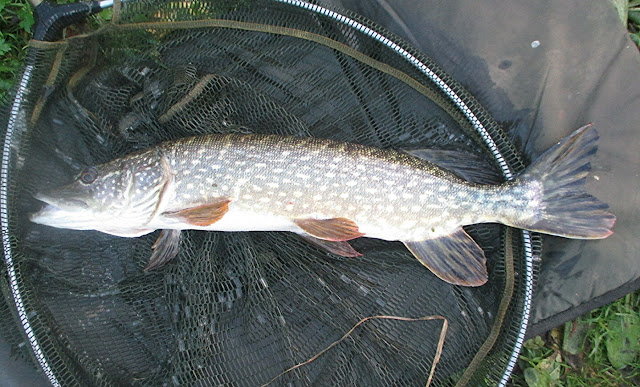 The predators will no doubt take over for me soon and the freezer is being steadily stocked up in anticipation. While it remains on the milder side I'll continue to hedge my bets though.